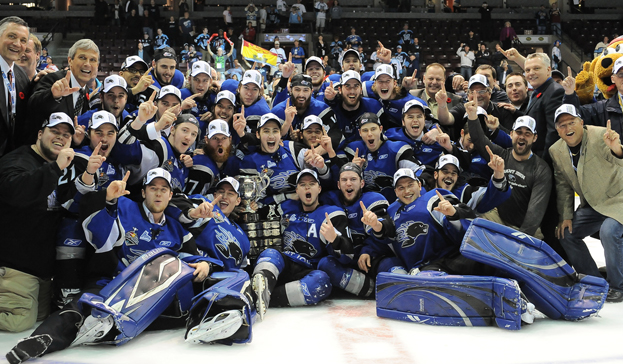 The Sea Dogs opened the scoring at 2:24 with a shorthanded marker. QMJHL All-star defenseman Simon Després, a Pittsburgh Penguins first round pick, sped around a Majors blue-liner and beat JP Anderson with a quick wrist shot blocker side.

Saint John benefited from two consecutive power-play chances, and they made no mistake with 2011 NHL Entry Draft prospect Zack Phillips jumping on a loose puck in the crease and pushing it between the legs of Anderson at 13:17.

The Majors almost got on the board early in the second period, hitting the cross-bar to keep the score 2-0 in favour of Saint John. Riley Brace finally got Mississauga on the board at 14:41. He completed a great passing play from Justin Shugg and Casey Cizikas and buried a shot past Jacob DeSerres to energize the sold out Hershey Centre crowd.

The Majors put enormous pressure on the Saint John defence throughout the third period, but DeSerres made save after save to keep Mississauga at bay.

Jonathan Huberdeau, who was named the tournament MVP, put an end to the suspense by scoring his third goal of the tournament with just under four minutes to play.

Of note, the Sea Dogs become the first Maritimes-based team to lift the MasterCard Memorial Cup in the 93-year history of the trophy.  The trophy was presented by CHL President David Branch to fellow New Brunswick native Mike Thomas.

Sea Dogs’ defenceman Nathan Beaulieu wins the cup following his father Jacques who hoisted the cup as an Assistant Coach with the London Knights in 2005.  They become the first Father/Son duo to win the cup since 2005 when Knights’ Head Coach Dale Hunter won alongside his son Dylan.  Also, Jean-Philippe Briere won with the Rimouski Oceanic in 2000 while his Father Michel won with the Quebec Remparts in 1971.

The Sea Dogs also match the 2002 Kootenay Ice and the 2007 Vancouver Giants as winners of the MasterCard Memorial Cup in just their sixth season since expansion.  Only the 1985 Prince Albert Raiders and the 1986 Guelph Platers hoisted the cup quicker doing so in three and four years respectively following expansion.

Saint John will try to defend its title at the 2012 MasterCard Memorial Cup which will be held in Shawinigan. 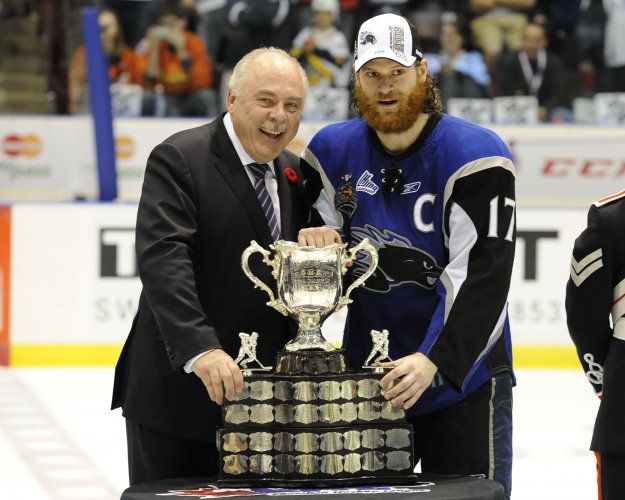