MISSISSAUGA, Friday, May 20, 2011 – Michael Kirkpatrick scored a goal and added two helpers to lead the Saint John Sea Dogs to a 4-3 victory over the Mississauga St. Michael’s Majors in front of just under 6,000 fans at the Hershey Centre in game one of the 2011 MasterCard Memorial Cup.

The Sea Dogs wasted no time getting on the board. Right-winger Tomas Jurco broke away from two defenders and buried a backhand shot past Majors’ goaltender JP Anderson at 1:43. The Majors battled back shortly thereafter, tying the score up at one after Casey Cizikas tipped a point-shot behind Jacob DeSerres.

Both teams added a marker before the end of the first twenty minutes of play. Devante Smith-Pelly, a second round draft pick of the Ducks in 2010, recorded his first goal of the MasterCard Memorial Cup before 2011 NHL draft hopeful Jonathan Huberdeau deflected a Michael Kirkpatrick shot that found the back of the net.
Saint John capitalized on the power-play at 6:58 of the second frame. Michael Kirkpatrick let go a powerful wrist shot that found an opening just over Anderson’s glove to put the Sea Dogs up 3-2. No other goals were scored in the second period.

The Majors let a five-on-three opportunity go to waste in the opening stages of the third period, failing to register more than one shot on goal during that span. As is often the case when a team misses such an opportunity, their opponent finds a way to make it count.

Saint John went up by two goals after Nathan Beaulieu buried a gorgeous pass that went through the crease and onto the stick of Jonathan Huberdeau on the power-play at 6:00. The Majors wasted no time cutting the lead to one thanks to a Justin Shugg goal just over a minute later to make it 4-3.

The Sea Dogs got their own five-on-three opportunity, but they failed to capitalize and that’s how the game would finish.

Game two of the MasterCard Memorial Cup goes tomorrow with the Kootenay Ice facing-off against the Owen Sound Attack. Watch all the play-by-play action live on Rogers Sportsnet starting at 7 pm. 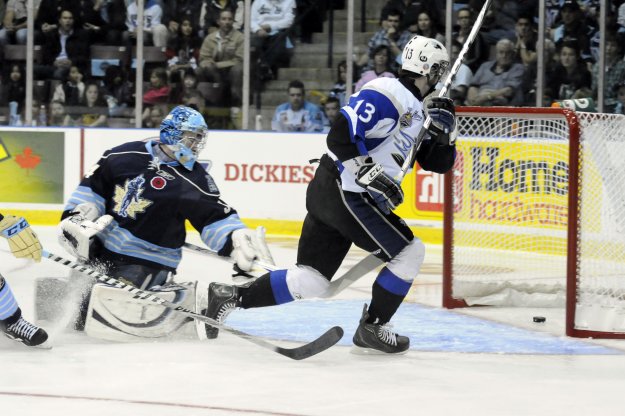