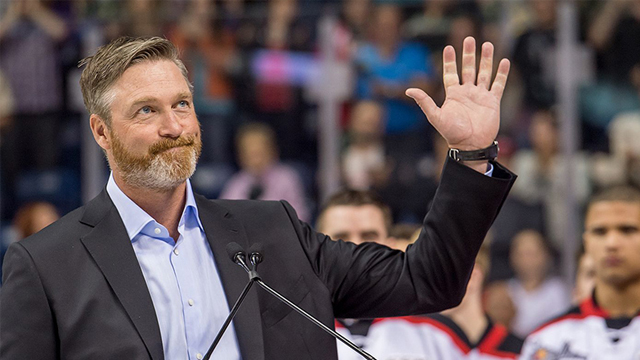 A look back over the recent history of the Québec Remparts reveals some pretty impressive trends.

No less than 37 wins or a .500 record dating back to 2003-04, a 2006 MasterCard Memorial Cup title, several players who have moved on to NHL careers while annually leading the Canadian Hockey League in attendance, none of which would be possible without the contributions of goaltending legend Patrick Roy.

Roy purchased the Beauport Harfangs organization and moved the franchise to Québec City, restoring a Remparts organization that won President Cup titles in 1970, 1971, 1973, 1974 and 1976 behind the efforts of names such as Guy Lafleur, Andre Savard, Guy Chouinard and Mario Marois.

The 1971 Remparts hoisted the Memorial Cup for the first time in franchise history. Fourteen years later, the franchise would cease operations.

In 1997, Roy revived the Remparts, bringing the team back to Québec City just two years after the NHL’s Québec Nordiques moved to Colorado where he had recently won the 1996 Stanley Cup as a member of the Avalanche.

The re-established Remparts, featuring talent in Simon Gagne and goaltender Maxime Ouellet were immediately successful, reaching back-to-back QMJHL semi-finals in 1998 and 1999, setting the standard for the franchise moving forward.

Roy would take over in the font office upon his retirement from the NHL in 2003, eventually moving behind the bench in 2006 where he became the seventh rookie coach in MasterCard Memorial Cup history to win the national title, following up Claude Julien who did so with the Hull Olympiques in 1997.

“Québec is a great city for hockey,” said Roy in his return to the Colisée on Tuesday prior to his pre-game recognition. “How many people have been coming night after night to see this team for the past 10 years? This is a great hockey town and I really hope that one day there will be an NHL team here in Québec.”

A native of Cap-Rouge, a suburb southwest of Québec City, Roy spent many a night at the Colisée growing up, recalling a few as Québec’s ‘fortress of hockey’ hosts its final games at the MasterCard Memorial Cup.

“I have a lot of memories of this building,” he said. “Back when I was 10 or 11 years old I was part of a (intermission) shootout. I remember Québec was playing against the Cincinnati Stingers. It was a highlight for me. The building was packed, it was pretty intimidating. I also had the opportunity to play in the peewee tournament here in Québec. We had a pretty good run that year. These were highlights of my life and of my youth hockey.”

Roy also recalls the 1993 first round playoff series between his Montréal Canadiens and the Québec Nordiques, one that the Habs would take in six games enroute to a Stanley Cup title.

“The fact that I was coming from Québec put maybe a little bit more spice in the series for myself and it was fun. There was a lot of electricity in the building and that’s the part I love most about this building. You just feel like people are on top of you and it makes it challenging and fun for you.”

Roy was met by a standing ovation when he took to the Colisée ice prior to puckdrop between the Kelowna Rockets and the Oshawa Generals on Tuesday.

The Québec Remparts honoured Roy with a tribute video before ascending his banner to the rafters of the Colisée where it joins former Remparts in Guy Lafleur, Simon Gagné, Marc-Edouard Vlasic and Alexander Radulov.

Perhaps the greatest goaltender to ever set foot on the ice, Patrick Roy’s contributions to the ‘diable rouge’ in reviving them and restoring the successful franchise that once was, won’t soon be forgotten.