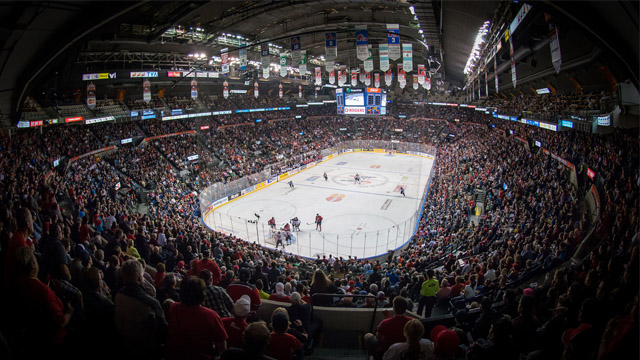 Anthony Cirelli’s overtime heroics in the 2015 MasterCard Memorial Cup Final closed the book on another season and wrote a memorable ending to 66 years of history at Colisee Pepsi, a building that once housed hockey greats in Jean Beliveau, Guy Lafleur and countless others who competed at all levels from Quebec’s annual Peewee tournament, through the AHL, NHL, and of course the QMJHL.

Cirelli banged in a rebound 1:28 into the extra frame to become the 9th overtime hero in championship history giving the Oshawa Generals their fifth MasterCard Memorial Cup title in franchise history and first since 1990 with a 2-1 win over the WHL Champion Kelowna Rockets.

“It’s so surreal you know,” said Cirelli, who made the Generals after being a free agent invitee to Training Camp. “I remember the goal and it all happened so fast. Carlisle got a low shot on net and the rebound just sat there. I just reacted and then everyone went crazy. It was the craziest moment of my life.”

Kelowna Rockets forward Leon Draisaitl was the recipient of the Stafford Smythe Memorial Trophy awarded to the MasterCard Memorial Cup MVP. An Edmonton Oilers prospect, Draisaitl also received the Ed Chynoweth Trophy as he led the tournament in scoring with four goals, three assists and seven points in five games.

Oshawa Generals goaltender Ken Appleby received the Hap Emms Memorial Trophy as Outstanding Goaltender while Rimouski’s Alexis Loiseau rounded out the awards, receiving the George Parsons Trophy given to the Most Sportsmanlike Player.

With all four teams closely matched, the event featured three teams finishing the round robin with identical 1-2 records for the first time. The result was the 12th tiebreaker in MasterCard Memorial Cup history as the Quebec Remparts and Rimouski Oceanic squared off in a President Cup Final rematch that saw the host club emerge victorious.

Broadcast partners Sportsnet and TVA Sports provided exclusive national coverage of the MasterCard Memorial Cup with Sunday’s Championship Final receiving the second-highest ratings in event history with 759,000 viewers watching on Sportsnet, just shy of the 2005 NHL lockout year total of 806,000 for a game that saw Corey Perry and the London Knights defeat Sidney Crosby and the Rimouski Oceanic.

Within an hour of Cirelli’s unforgettable goal, the ice at the Colisée Pepsi began to melt and the Remparts future shifts to the brand new Colisée Videotron prominently showcased next door and scheduled to welcome fans to begin the 2015-16 season.

With that new chapter also begins the quest for 60 CHL teams who have their sights set on the 98th MasterCard Memorial Cup which takes place May 19-29 , 2016, in Red Deer, Alberta.