MISSISSAUGA, Wednesday, March 25, 2011 – Rob Flick scored the game-winning goal near the end of the second period to lead the Majors to a 3-1 victory over the rival Owen Sound Attack. With the win, the Majors clinched a berth in the semi-final game on Friday.

The Majors opened the scoring at 8:01 of the first period. Maxim Kitsyn flipped a beautiful lead pass to Jordan Mayer who buried a wrist-shot past Jordan Binnington. Later in the period, the Majors appeared to take a two-goal lead, but the goal was disallowed as the video replay showed that Devante Smith-Pelly intentionally redirected the puck off his helmet.

Very few scoring opportunities presented themselves in the second period, but Owen Sound capitalized when they got the chance. Andrew Shaw registered his second goal of the 2011 MasterCard Memorial Cup at the eight-minute mark to tie the score up at one. Goaltender Jordan Binnington was red-hot for the Attack in the second frame, stopping several shots on odd-man rushes.

The Majors got a golden opportunity to go up by a goal with two Attack players in the penalty box and they did not disappoint the hometown fans. Rob Flick, a Chicago Blackhawks draft pick, scored his second goal of the tournament by wiring a wrist-shot over Binnington’s glove.

The Attack got a two-man advantage of their own in the third period, but failed to tie the game up.

Justin Shugg completed the scoring with an empty-net goal with just over thirty seconds remaining in the game.

The author of the game-winning goal, Rob Flick, was named the game’s first star for the second straight game while teammate J.P. Anderson received third star honours after pushing away 21 shots.

The tie-breaker game of the 2011 MasterCard Memorial Cup will feature the Owen Sound Attack battling the Kootenay Ice. The game will be broadcast live on Rogers Sportsnet starting at 7 pm. 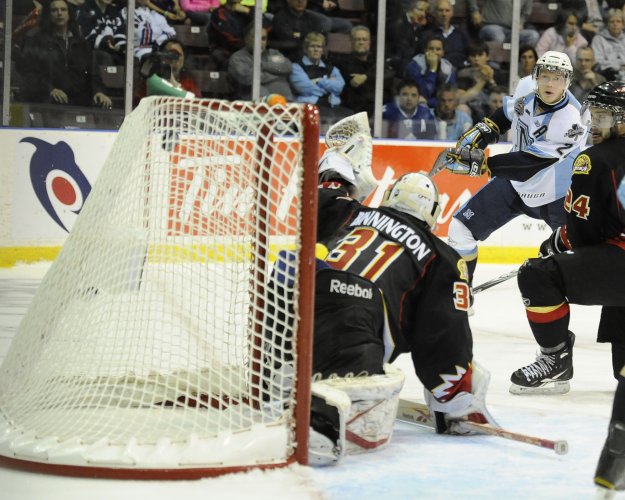