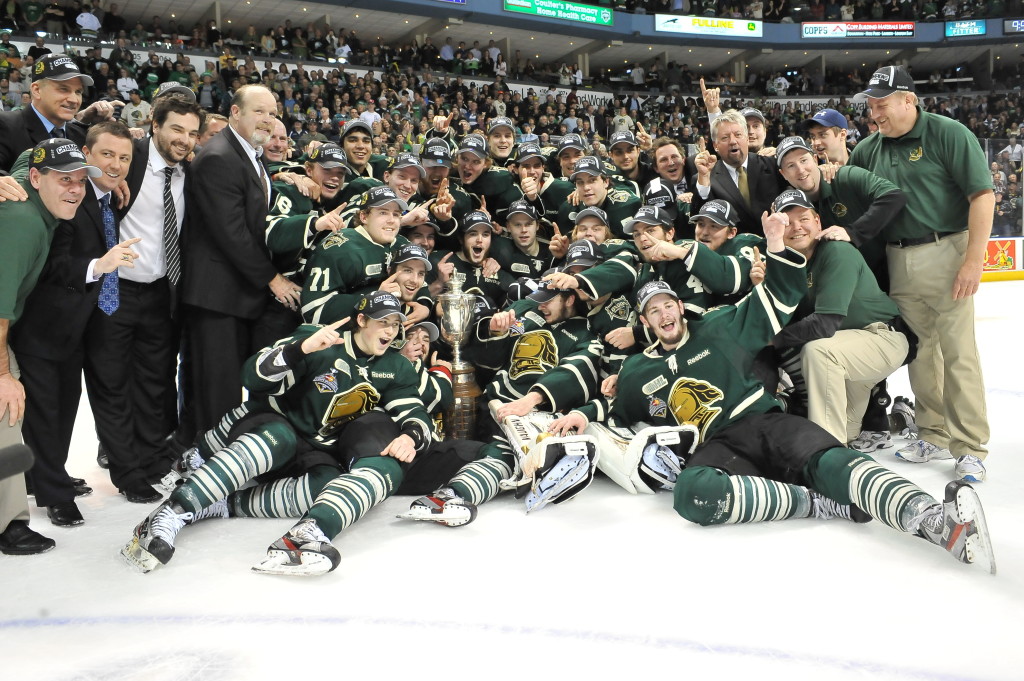 The London Knights are 2011-12 OHL Champions after defeating the Niagara IceDogs 2-1 in Game 5 of the Rogers OHL Championship Series.

This marks the second Robertson Cup OHL Championship title for the Knights who last won in 2005.

The teams exchanged chances in the first period. The Knights’ Michael Houser and the IceDogs’ Mark Visentin stopped seven shots apiece to keep the score 0-0.

At 12:34 of the second period Austin Watson broke the goose egg banging in a loose puck. Visentin made the initial save off of a streaking Scott Harrington shot. Watson drove to the net for his 10th of the playoffs.

Seth Griffith extended the lead to 2-0 for the Knights early in the third period. Griffith and Namestnikov skated in on a two-on-one. Namestnikov waited for the IceDogs defender to commit then flipped a pass over to Griffith who one-timed his shot past Visentin.

The IceDogs cut the lead in half at 7:53 of the third. Tom Kuhnhackl, battling in front of the Knights’ net, picked up the rebound from a Jamie Oleksiak point shot and put it past Houser for his sixth of the playoffs.

Houser made 26 saves for his 16th win of the playoffs helping the Knights to an impressive 16-3 record in the post-season defeating the Windsor Spitfires in four games, the Saginaw Spirit in six games, the Kitchener Rangers in four straight, before finishing the IceDogs in five.

Austin Watson won the Wayne Gretzky 99 trophy as playoff MVP. He had two goals in the final series, including one in the final game and finished the playoffs with 10 goals and seven assists for 17 points in 19 games and played a critical role on the Knights’ penalty kill blocking countless shots all series.  The last member of the Knights to win the award was Corey Perry for his efforts in the 2005 series.

The Knights will head to Shawinigan, Quebec, for the MasterCard Memorial Cup and will open competition against the QMJHL Champion Saint John Sea Dogs on Saturday May 19th.