Saint John had two quick power-play opportunities in the opening stages of the first period but they were unable to get any good shots on goal and failed to capitalize. The score remained tied at zero after the first twenty minutes of play. The Ice outshot the Sea Dogs 12-6.

Ryan Tesink registered the game’s first goal at 1:24 of the second period after being on the receiving end of a nice Zack Phillips pass in the slot. He wired a wrist shot past Nathan Lieuwen to put Saint John up 1-0.  The Sea Dogs doubled their lead at 5:33. Stanislav Galiev forced a turnover at the blue-line before flipping a saucer pass to Tomas Jurco who flicked it past the Ice goaltender.

Ice forward Joe Antilla had a golden opportunity to cut the lead by one, but Sea Dogs goaltender Mathieu Corbeil-Thériault made an outstanding glove save that wowed the fans at the Hershey Centre.

The Ice got on the board on the power-play at 13:13. Drew Czerwonka, an Edmonton Oiler draft pick, made the most of his wrap-around opportunity to cut the lead to one.

The Sea Dogs got called for back-to-back penalties, setting up the Ice for a two-man advantage and they certainly made the most of it. Kootenay defenseman Brayden Mcnabb slapped a shot that Kevin King deflected past Corbeil-Thériault.

The Ice kept pressing, taking a 3-2 lead only twenty-three seconds into the third period. Jesse Ismond jumped on a juicy rebound and buried the puck into the net. Less than two minutes later, Saint John tied it up at three with a Kevin Gagné goal.

Back and forth they went. Kootenay retook the lead at 7:19 with a power-play goal by Matt Fraser, his second marker of the game. Tomas Jurco was credited with the tying goal with fifteen seconds left after the puck hit his helmet and went into the goal forcing overtime.

Matt Fraser got kept the Ice alive by scoring 3:55 into overtime. He was named the game’s first star.

Max Reinhart recorded four assists for the Ice and is the first player since Nick Spaling of the Kitchener Rangers in the 2008 MasterCard Memorial Cup to produce four assists.

Game six of the MasterCard Memorial Cup is a rematch of the OHL Championship Series between the Owen Sound Attack and the Mississauga St. Michael’s Majors at 7pm. The game will be broadcast live on Rogers Sportsnet.

The winner of Wednesday night’s game will advance straight to Friday night’s Semi-Final while the loser will face the Ice in the Tie-Break Game on Thursday. 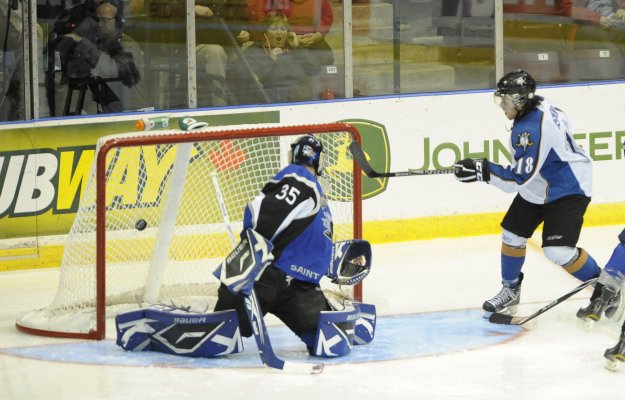