The Sea Dogs controlled the play in the opening stages of the game, testing Attack goaltender Jordan Binnington with a few quality scoring chances. But Owen Sound wound up taking a 1-0 lead after Matt Petgrave directed a shot on net that was redirected by a Saint John defenseman past Jacob DeSerres.

The Attack doubled their lead with an Andrew Shaw power-play goal at 14:23. The goal was once again a product of a deflection.

Saint John capitalized on a power-play opportunity at 13:49 in the second period as Tomas Jurco sent a gorgeous pass through the crease to Stanislav Galiev who slapped the puck into an open net to make it 2-1. No other markers were recorded before the end of the second frame.

The Sea Dogs kept the pressure on throughout the first half of the third period, but were just unable to buy a goal despite numerous scoring opportunities. Tomas Jurco finally solved Binnington with less than four minutes remaining by redirecting an errant shot from behind the net and flipping it past the sprawling goaltender to force overtime.

Jonathan Huberdeau recorded his second goal of the tournament to lead the Sea Dogs to the big win. The 17 year-old forward was named the game’s first star.

Game five of the MasterCard Memorial Cup pits the Kootenay Ice against the Saint John Sea Dog at 7pm. The game will be broadcast on Rogers Sportsnet and RDS. 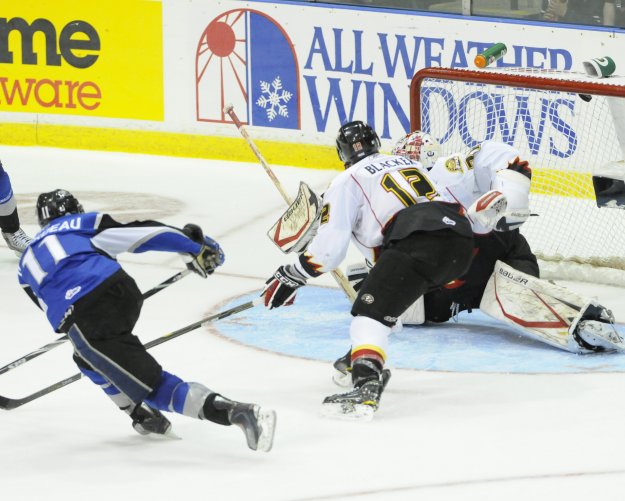