Flick powers the Majors to win over Ice

MISSISSAUGA, Sunday, May 22, 2011 – Rob Flick scored the game-winning goal at 11:51 of the third period to help the St. Michael’s Majors defeat the Kootenay Ice 2-1 in front of a packed house at the Hershey Centre.

There were no secrets about the Majors’ intentions coming out of the gates. They used an aggressive forecheck to keep the Ice deep into their own zone for most of the first half of the opening period.

Nevertheless, it was the Ice that registered the first goal of the game courtesy of Washington Capitals prospect Cody Eakin. The center blasted a wrist shot past Mississauga goaltender J.P. Anderson at 7:55. But the lead was very short-lived. Maxim Kitsyn drove hard to the net and pounced on a rebound in the crease to make it 1-1 less than two minutes later. No other goals were recorded in the first frame.

Justin Shugg made a nifty deek before moving in on Nathan Lieuwen who stoned him in the first few instances of the second period. A few moments later, Shugg was forced to leave the game after a collision in the offensive end.

The Majors let a golden opportunity go to waste with two Ice players in the box. Mississauga could not get anything going offensively and Devante Smith-Pelly killed the 5-on-3 by taking a hooking penalty midway through it.

Rob Flick scored the winning marker at 11:51 of the third period and was named first star of the game. He went around the Kootenay defenseman and blasted a shot past Lieuwen, lifting the hometown fans out of their seats.

Game four of the MasterCard Memorial Cup pits the Saint John Sea Dogs against the Owen Sound Attack Monday at 7pm. The game will be broadcast on Rogers Sportsnet and RDS. 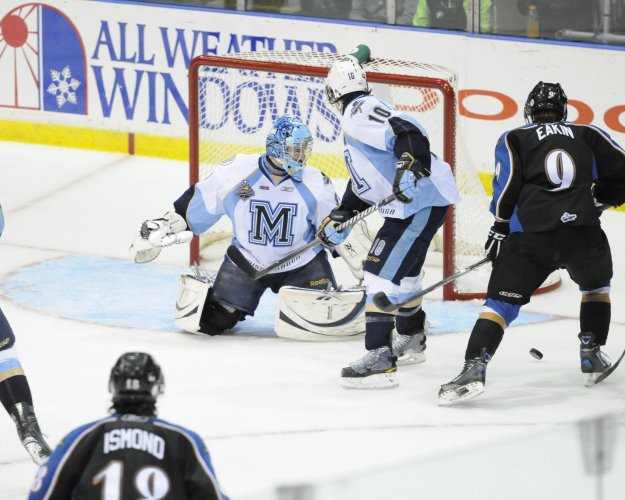