Blades Team Of The 1980’s Announced 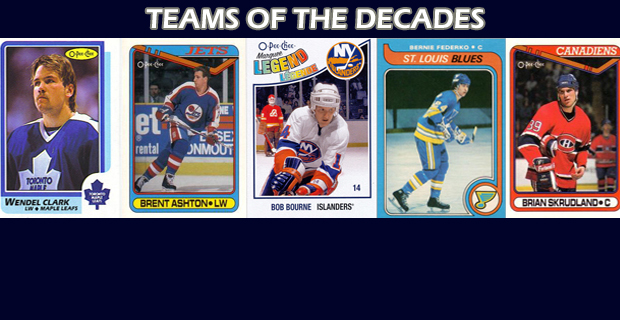 The host committee for the 2013 MasterCard Memorial Cup is pleased to announce the Saskatoon Blades’ Team of the ’80s.

Voted by fans, the Team of the ’80s features five prominent players who went on to establish themselves in the professional ranks:

**Please see below for a short bio of each player.

The Team of the ’80s is the third of five franchise all-star teams that will be unveiled leading up to the 2013 MasterCard Memorial Cup, which runs May 16-26 in Saskatoon. Starting last spring, the host committee invited fans to vote online for their favourite Blades from each decade dating back to the team’s inception in 1964. The teams of the ’90s and the Millennium (2000 to present) will be announced later this month.

Congratulations to Jared Penner, winner of a pair of game tickets for the 2013 MasterCard Memorial Cup. Jared’s name was randomly drawn from all submissions for the Team of the ’80s. Thanks to everyone who voted.

Saskatoon Blades’ Team of the ’80s

Brian Skrudland – Skrudland spent his three-year WHL career behind offensive whizzes such as Marc Habscheid, Bruce Eakin, Todd Strueby and Roger Kortko, but the Saskatoon native found his niche as a gritty two-way centre. He put up 94 points in 1982-82, his final junior season, and shortly after graduating from the Blades, the team named its top defensive forward trophy after him. He went on to a 15-year NHL career that netted Stanley Cups with Montreal in 1986 and Dallas in 1999. The Blades retired his No. 10 jersey in 2003.

Kelly Chase – One of the great characters in Blade history, Chase wasn’t afraid to stir the pot. His 800 career penalty minutes still rank fourth in franchise history. He’s also in the team record book for being part of the first scrap when the Blades opened their new rink (then known as Saskatchewan Place) on Feb. 9, 1988. While best known for his rugged reputation, Chase also netted an impressive 21 goals in his final junior campaign. He went to an 11-year NHL career with St. Louis, Hartford and Toronto.

Marc Habscheid – Habscheid was among the most dangerous offensive catalysts in team history. One of only six Blades to record 150-plus points in a single season, he piled up 64 goals and 87 points during the 1981-82 campaign. That same season, he helped Canada win its first-ever gold at the world junior hockey championship. Habscheid went on to play 345 NHL games but some of his greatest success came on the international stage. He and fellow Blade alumnus Randy Smith helped Canada win silver at the 1992 Olympics in Albertville, France.

Wendel Clark – Although best remembered as a tough and talented NHL winger, Clark actually started his career as a defenceman. In just two seasons as a Blade blue-liner, he piled up 155 points and 478 penalty minutes – numbers that led him to be selected first overall by the Toronto Maple Leafs in 1985. Clark mastered the wrist shot and used it to record many of his 330 goals during a 15-year NHL career with Toronto, Quebec, the New York Islanders, Tampa Bay, Detroit and Chicago. The Blades retired his No. 22 in 2001.

Curtis Leschyshyn – Leschyshyn had just celebrated his 17th birthday when he stepped into the Blades’ lineup in 1986, but he made an immediate impact. In addition to being a sturdy defender, he registered 95 points in two WHL seasons. After being selected third overall by Quebec in 1988, Leschyshyn began an NHL career that would span 1,033 games – one of the longest careers ever achieved by a Blade alumnus. He is currently an assistant coach with the Blades.

Tim Cheveldae – No Blade goaltender has won more regular-season games than Cheveldae. During three WHL seasons from 1985-88, he registered 85 victories. That’s three more than current Washington Capitals star Braden Holtby. Cheveldae’s name is engraved on the Blades’ top rookie award (1986) and team MVP award (1987), and he was also recognized as a first-team East Division all-star in 1988. He went on to make 340 NHL appearances with stops in Detroit, Winnipeg and Boston. Like Leschyshyn, Cheveldae is currently an assistant coach with the Blades.