MISSISSAUGA, Saturday, May 21, 2011 – Robby Mignardi scored two goals and Roman Berdnikov had a goal and an assist as the Owen Sound Attack defeated the Kootenay Ice 5-0 in game two of the 2011 MasterCard Memorial Cup.

There were very few scoring opportunities in the opening minutes of the first period with both teams looking a little hesitant to open up the play. The first real test came off the stick of Attack forward Andrew Shaw near the nine minute mark, but he was stoned by a beautiful Nathan Lieuwen glove save.

Robby Mignardi opened the scoring for the OHL champions by one-timing a great feed from Andrew Shaw at 16:49. The marker wound up being the only goal scored in the first period.

Roman Berdnikov put the Attack up by two at 3:30 of the second frame. The right-winger let a wrist shot go from the top of the face-off circle that fooled Lieuwen short side. Following the goal, Kootenay took it up a notch but were unable to capitalize as Jordan Binnington was simply spectacular, stopping all 15 shots he faced in the period.

In the final period, it was the fantastic play of Ice goaltender Nathan Lieuwen’s which turned heads. He kept Kootenay in the game by stonewalling the Attack on several great scoring chances.

Jordan Binnington was named the game’s first star after stopping 29 shots to earn the shutout win.

Game three of the MasterCard Memorial Cup goes tomorrow with the Kootenay Ice taking on the host Mississauga St. Michael’s Majors. Watch all the play-by-play action live on Rogers Sportsnet and RDS starting at 7 pm. 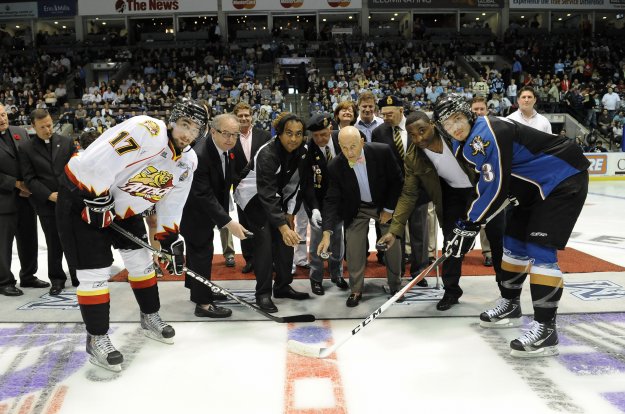