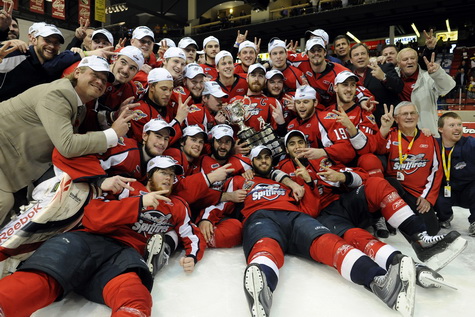 BRANDON, Sunday, May 23, 2010 – Adam Henrique and Ryan Ellis each registered three points while the Spitfires recorded 52 shots on goal en route to a convincing 9-1 victory over the host Brandon Wheat Kings to win the 2010 MasterCard Memorial Cup.

The Spitfires become just the eighth team in CHL history to win back-to-back titles, and the first team since the Kamloops Blazers in 1994 and 1995.

Adam Henrique opened the scoring at 6:34 with a wrist-shot which he directed between the pads of Jacob De Serres.
Then, with 33 seconds left in the first period, the Spitfires doubled their lead. The Wheat Kings failed to clear the puck causing a turnover in their own zone which opened the door for Eric Wellwood who jumped on a loose puck and beat De Serres top shelf.

Windsor took a 3-0 advantage 4:34 into the second period with Brent Raedeke in the penalty box for slashing. Taylor Hall let go a powerful wrist-shot from the left face-off dot that found an opening over the goaltender’s shoulder.

The Wheat Kings cut the lead to two less than four minutes later. Matt Calvert recorded his third goal of the MasterCard Memorial Cup on the power play. But it wasn’t long before the Spitfires added to their lead. After a lengthy review from the video replay both, Greg Nemisz’s goal was confirmed, putting Windsor up 4-1.

Zach Kassian and Cam Fowler added markers prior to the end of the second period to put the game out of reach.

Philipp Grubauer made 27 saves to record his fourth win of the tournament.

Following the game, Taylor Hall was awarded the Stafford Smythe Memorial Trophy as the 2010 MasterCard Memorial Cup MVP, his second in as many years. He completed the tournament with 5 goals and 4 assists.

Of note, Cam Fowler became just the 22nd player in history to win both a gold medal at the IIHF World Junior Championship as well as a Memorial Cup title in the same year. His teammate, Ryan Ellis, accomplished the feat last year.

One of the players who also managed to win both titles is former Brandon Wheat King Trevor Kidd who won gold with Canada in 1991 before winning a Memorial Cup with the Spokane Chiefs.  Kidd participated in the opening ceremonies prior to the game before a Westman Place crowd of 5,609.