“The city of Windsor and Essex County is home to some of the most passionate fans in the entire Canadian Hockey League,” said OHL Commissioner David Branch. “It is only fitting that an event of this magnitude be hosted in a world class facility like the WFCU Centre in a community that embodies dedication and over 40 years of rich history in junior hockey.  We are extremely proud to award the Spitfires the opportunity to host the 2017 MasterCard Memorial Cup and look forward to showcasing our league and the CHL’s best major junior players and teams in Windsor next May.”

The 99th edition of the MasterCard Memorial Cup will take place May 18-28, 2017, at Windsor’s WFCU Centre, featuring the host Spitfires along with the champions of the Ontario Hockey League, the Western Hockey League, and the Quebec Major Junior Hockey League.

“We are extremely proud to be chosen to host the 2017 MasterCard Memorial Cup,” Spitfires President Bob Boughner said. “It has been a dream since day one of our ownership to bring this prestigious event to Windsor.  We are very excited to give our loyal fans, who have faithfully supported the Spitfires, an opportunity to experience the pinnacle of junior hockey. Thank you to Commissioner David Branch and the bid committee for entrusting in our ability as host. We’ll strive to make it unforgettable.”

The prestigious national championship returns to the city of Windsor for the first time since 1981, an event that featured three teams including the champion Cornwall Royals (QMJHL), the Kitchener Rangers (OHL), and the Victoria Cougars (WHL) at Windsor Arena.

“What a great day for the City of Windsor and Windsor Spitfires fans,” said Spitfires Governor and 2017 Host Committee Chair John Savage. “To be given the honour of hosting the 2017 MasterCard Memorial Cup is a major affirmation of this city, its team and our fans.”

The Spitfires are listed in MasterCard Memorial Cup record books as one of just eight teams to win back-to-back titles at the 2009 event in Rimouski, QC, and Brandon, MB, in 2010.  Taylor Hall was named MVP at both events and is the only two-time recipient of the Stafford Smythe Memorial Trophy in tournament history. 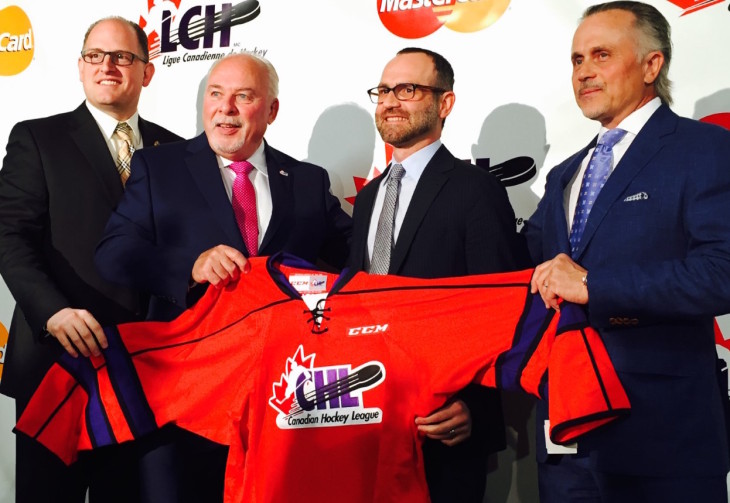 “MasterCard would like to congratulate the City of Windsor and the Windsor Spitfires on their successful bid to host the 2017 MasterCard Memorial Cup,” said Kobi Gulersen, VP of Sponsorships and Merchant Marketing, MasterCard Canada. “We continue to be very proud to support the Canadian Hockey League and this prestigious national championship for the 19th straight year.”

Since the round-robin format was introduced in 1972, OHL teams have won a total of 15 Memorial Cup Championships including the 2015 Oshawa Generals.

Members of the Spitfires and the 2017 MasterCard Memorial Cup Host Organizing Committee will travel to Red Deer, AB, for the 2016 MasterCard Memorial Cup which takes place May 19-29.  The OHL will be represented at the event by the winner between the London Knights and the Niagara IceDogs in the Rogers OHL Championship Series which begins Thursday night in London.

Information regarding ticket packages and other local initiatives for the 2017 MasterCard Memorial Cup will be announced by the Host Committee in the coming weeks.  The best opportunity to secure priority access event tickets is to become a Windsor Spitfires season ticket holder.  For details please visit www.windsorspitfires.com.