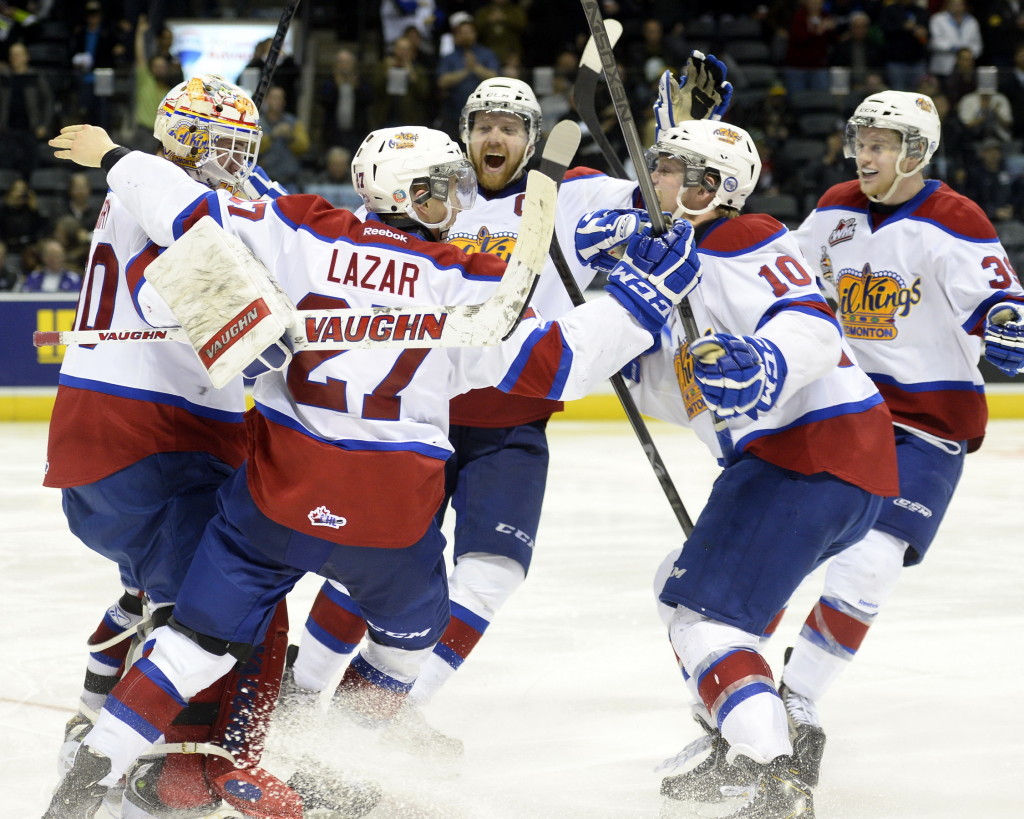 London, ON – The Edmonton Oil Kings have earned a spot in Sunday’s Championship Final defeating the Val-d’Or Foreurs 4-3 in triple overtime in what is now the longest game ever played in the MasterCard Memorial Cup history.

Friday’s Semi-Final contest was a rematch of a double overtime thriller that saw Val-d’Or defeat Edmonton 4-3 in round-robin action on Tuesday night.

“The overtime periods were outstanding” said Edmonton Oil Kings Head Coach Derek Laxdal, “[an] unbelievable game to be apart of”.

“That’s the first overtime goal I’ve ever scored,” Lazer said. “I don’t know if I’ve even scored an overtime goal in minor hockey, but that’s my first junior hockey overtime goal. And it was the longest game in Memorial Cup history. So that’s all pretty cool.”

The dramatics in this contest began even before the overtime period when Guillaume Gelinas scored on a point-shot with just 36 seconds to play in regulation to tie the score for Val-d’Or.

“All the province of Quebec should be proud of our guys and they should keep their heads up,” said Val-d’Or’s Head Coach, Mario Durocher during the post-game press conference.

Phil Pietroniro opened the scoring for Val-d’Or with a wrist shot that beat goaltender Tristan Jarry, less than two minutes into the first period.

The Oil Kings evened things up with a goal from Mads Eller, the younger brother of Montreal Canadiens forward, Lars. He tapped in the puck past Antoine Bibeau which originally came from a Griffin Reinhart point shot attempt.

Edmonton Oilers Prospect Mitch Moroz scored a power play goal that made it 2-1 for the Oil Kings.

Randy Gazzola, who had 74 points in the regular season, cut the deficit to one with just over two minutes remaining in the 2nd period.

“We left it all out there and that’s what we needed to do and what can you say, the boys laid it on the line and [I] couldn’t be more proud of them,” said Gazzola, who scored two goals in this tournament.

Bibeau made 50 saves despite the loss, while Jarry stopped 46 shots including 20 in extra time.

The Oil Kings will now get some rest after the marathon Semi-Final matchup and prepare for the Guelph Storm in the Championship Final, which will be played Sunday at 4pm at Budweiser Gardens.

Both clubs are playing for their first MasterCard Memorial Cup title with the Oil Kings making their first ever finals appearance in modern history, while the Storm return to the finals for the first time since falling 4-3 in overtime against the Portland Winter Hawks in 1998.