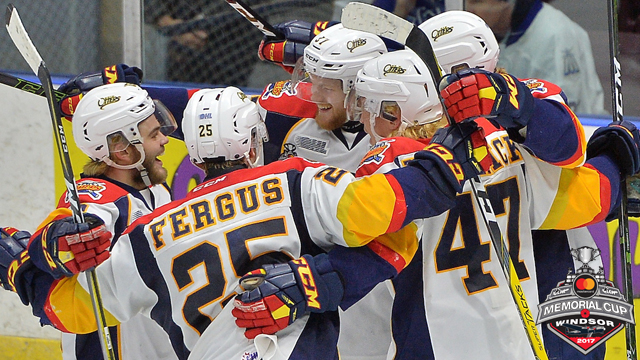 Beyond the championships and individual awards, there is an undeniable trend in the Canadian Hockey League of elite players following one another on the same team.

Star player begetting star player, if you will.

There is no better trend right now than the Otters. The team that produced Connor McDavid has now had several great forwards suit up in Otter colours after that generational forward’s graduation two years ago.

The current group has now given the Erie Otters their first Robertson Cup win since 2002 after seasons of making it to the OHL Final in 2015 and the Western Conference Final in 2016.

Head coach Kris Knoblauch points out that it didn’t just start with McDavid.

Knoblauch was referring specifically to Alex DeBrincat, Dylan Strome and Taylor Raddysh. DeBrincat, of course, had a season for the ages, scoring 65 goals and 127 Points, winning the Red Tilson Trophy as the OHL’s top player in the process. He joins a line of Otters Red Tilson wins that includes both Brown and McDavid, but also two-time winner Brad Boyes, who led the last Otters OHL champion in 2002.

Truthfully, Raddysh (109 points) and Strome (75 points in just 35 games) could have won the award if not for their teammate, and their own absence from the lineup while playing for Team Canada at the World Junior.

Having arguably the three best offensive players in the OHL is all you need to know about the weapons Knoblauch has at his disposal. But DeBrincat, Strome and Raddysh only tell part of the story. The team also welcomed Anthony Cirelli after he won a silver medal playing with Strome and Raddysh at the 2017 World Junior.

Cirelli scored both Oshawa Generals goals, including the winner in overtime, during the 2015 Mastercard Memorial Cup championship game in Quebec City. Cirelli joined a team that had made an OHL Final appearance two years ago and a Western Conference appearance last season. True to form, he scored the overtime winner in Game 5 that clinched the OHL Championship over the Mississauga Steelheads.

Though McDavid moved on after being the No. 1 pick seven weeks after his final game for the Otters, almost half of the lineup from the team that lost to Cirelli and the Oshawa Generals in the OHL Final two years ago remains. The experience, especially with the ascension of DeBrincat, Strome and Raddysh to where they are now, was a significant factor in getting over the hump and winning the OHL crown after being close twice.

“I think experience is a factor,” said Strome. “I think (when you have) eight or nine guys that played in the OHL Championship that really helps.”

“I had an opportunity to play with some of those guys my first year – Connor, and Dylan too,” said DeBrincat. “It was really (an opportunity) to just soak it all in. To watch Connor McDavid in practice and watch him make plays at speed like that, it really helped me (realize) that I have to (learn to) do that as well.”

Darren Raddysh, Taylor’s older brother, also scaled new individual heights this season in Erie. The defenceman led all blueliners in scoring with 81 points (16G, 65A), winning the Max Kaminsky Trophy as the OHL’s top defenceman, in addition to the Leo Lalonde Memorial Trophy as the league’s top overage player. In winning both trophies, Raddysh became the first player to take both honours in the same season.

Like his teammates, it has been quite a journey for Darren Raddysh.

“As a 16-year-old you come in and try to be a sponge and I learned from all the guys that were here before me,” he said in an OHL release after winning the top defenceman award. “We had a lot of great coaches and I had a lot of great mentors that were on the back end. I tried to learn as much as I could from them and apply it to my game.”

Another factor that helps, although it may be tough for the previous Otter clubs to accept it at the time, is playing in the ultra-tough OHL Western Conference. Five Western Conference teams spent significant time in the CHL’s Top 10 national rankings this year and there were other clubs that were not easy-beats, either in the playoffs or the regular season.

Knoblauch played down the significance of Erie’s Western Conference situation simply because that’s all he has known coaching the Otters. But he also acknowledged the razor-thin margin for error that included a Game 7 overtime victory over the defending Mastercard Memorial Cup champion London Knights, and a tough six-game series win over the Owen Sound Attack.

“I think every team in order (to advance) has to beat difficult opponents,” said Knoblauch.

“But for sure, Owen Sound and London were very tough and we could have lost (those series).”

Up front, Knoblauch also has veteran forward Warren Foegele, who scored the overtime winner in Game 7 against the Knights, Kyle Maksimovich, Ivan Lodnia and Kyle Pettit. That quartet combined for 206 points. At the back end, Jordan Sambrook, T.J. Fergus and Erik Cernak, who played in the past four World Juniors for Slovakia, are all shoe-leather tough competitors.

Troy Timpano won 36 games in goal and is ably backed-up by Joseph Murdaca.

As if there weren’t enough interesting stories on the Otters, here’s another: defenceman Cameron Lizotte may be a no-frills player but off the ice he has quite a creative flair, designing his own fashion line.

Like so much about the Otters, the fit is just right.