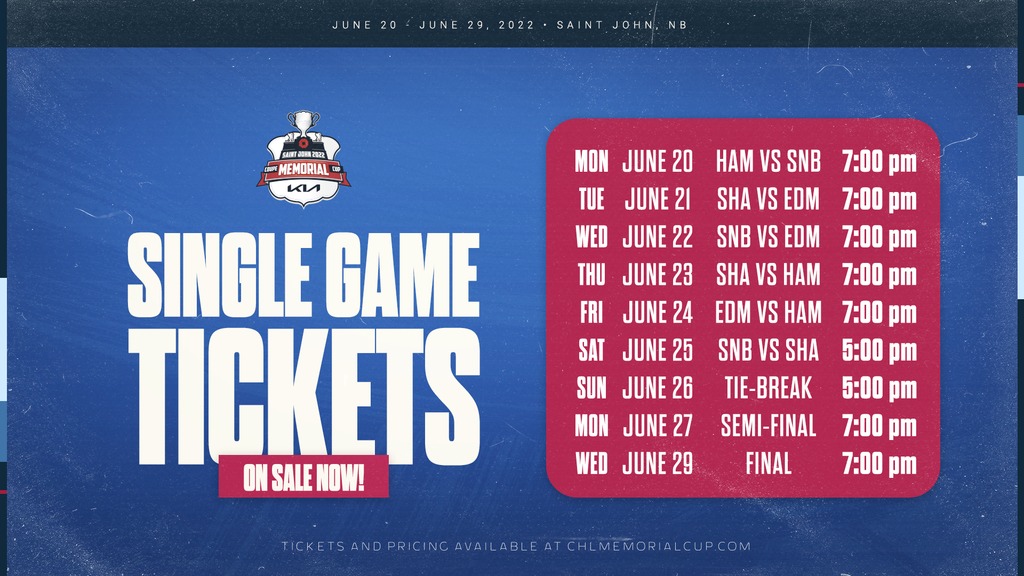 Single game tickets to the 2022 Memorial Cup presented by Kia to be held June 20-29 in Saint John, N.B., were released Thursday, available for purchase for $60.50 to $90 plus applicable taxes and fees.

Limited two-game ticket packages also remain on sale, available for $117 to $175 plus applicable taxes and fees. Additionally, full ticket packages counting all eight games plus an if necessary tie-breaker remain available in two tiers priced at $390 and $460 plus applicable taxes and fees, allowing fans to take in the exciting action featuring the host Saint John Sea Dogs as well as the OHL’s Hamilton Bulldogs, QMJHL’s Shawinigan Cataractes, and WHL’s Edmonton Oil Kings.

Beginning Monday, the Sea Dogs will take on the OHL’s Hamilton Bulldogs/Windsor Spitfires. Finishing third overall in the QMJHL with a record of 47-17-1-3 and 98 points, the regular season wrapped on a high note for the Sea Dogs as the club pieced together 15 consecutive victories backed by talented forward and New York Islanders draftee William Dufour whose 116 points set a franchise record.

The Sea Dogs will begin Memorial Cup action against the OHL-winning Hamilton Bulldogs, the league’s regular season champion who concluded 2021-22 with 51 wins and 107 points in 68 games before posting a 16-3 showing in the postseason. The Bulldogs are headlined by NHL drafted talent including budding centre Mason McTavish, an Anaheim Ducks prospect who was selected third overall in the 2021 NHL Draft.

On Tuesday, the QMJHL champion Shawinigan Cataractes will take on the WHL-winning Edmonton Oil Kings in round-robin play. Winning 13 of 16 playoff contests underscored by a perfect 7-0 record in overtime games, the Cataractes are led by a pair of recent first-round NHL draft choices in Mavrik Bourque (Dallas Stars, 2020) and Xavier Bourgault (Edmonton Oilers, 2021), with both finishing among the top-four QMJHL playoff scorers.

From the WHL, the Oil Kings return to the year-end tournament for the first time since 2014 when the club raised CHL supremacy. Earning top spot in the national Kia CHL Top-10 Rankings seven times this season, the Oil Kings were dominant throughout the 2021-22 campaign, finishing second overall in the WHL with a record of 50-14-3-1 and 104 points before going 16-3 in the postseason. The Oil Kings lineup is highlighted by four first-round NHL draft selections including forwards Dylan Guenther (Arizona Coyotes, 2021) and Jake Neighbours (St. Louis Blues, 2020) plus defenceman Kaiden Guhle (Montreal Canadiens, 2020) and goaltender Sebastian Cossa (Detroit Red Wings, 2021).

With the 2022 Memorial Cup presented by Kia beginning June 20, fans are encouraged to act quickly to purchase their tickets online, by telephone at 506-657-1234, and at the Harbour Station box office from 10 a.m. to 2 p.m. Monday to Friday.