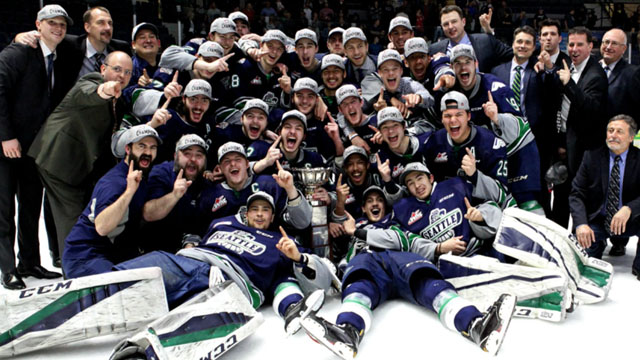 Down 3-1 with six minutes remaining in regulation, Ryan Gropp and Keegan Kolesar scored less than three minutes apart to knot the score at three, sending the game to overtime where True followed up on his own rebound with assists from Kolesar and Aaron Hyman for a 4-3 win.

The Thunderbirds hoist the Ed Chynoweth Cup for the first time since WHL hockey came to Seattle in 1977, battling back to win the Rogers WHL Championship Series in six games after being swept in the Final by the Brandon Wheat Kings last spring.

New York Islanders prospect Mathew Barzal earned WHL Playoff MVP honours finishing with 25 points including seven goals and 18 assists in 16 games. Barzal, who missed the first round of the postseason with a case of the mumps, collected eight points in the Championship Series.

“I couldn’t be prouder of this group of guys,” said Barzal during on-ice celebrations. “We had a tough go last year losing in the finals but we came back this year. We worked so hard all year and it’s nice to see everyone lift the cup and be rewarded.”

Sami Moilanen also scored for Seattle in the win while Columbus Blue Jackets prospect Keegan Kolesar was in on both the tying and winning goal to secure the WHL Playoff scoring title with 31 points including 12 goals and 19 assists in 19 contests.

“I can’t even put it into words right now,” said Kolesar post-game. “I was crying earlier. A lot of us were. It’s just such a great feeling to bring this to the organization and to have all the support we have here tonight. It’s just unbelievable.

“There is so much character on this team, it’s unbelievable. We’ve had so much adversity with guys being injured, being down on the scoreboard, and we found a way to bounce back. You saw that here tonight – we’re down 3-1 and we don’t give up.

Rookie netminder Carl Stankowski stood tall in goal for Seattle as he has throughout the postseason, making 28 saves on the night.

“I’ve never seen a 16-year-old so focused and prepared at all times,” Barzal said of Stankowski. “We told him going into overtime, ‘We got you, buddy. Just make some big saves and we’ll get this one for you.’ He’s been great for us.”

Sam Steel, Josh Mahura and Austin Wagner had goals for Regina in the loss as the Pats came up short in their first WHL Championship appearance since 1984.

The Pats were Scotty Munro Memorial Trophy recipients as WHL regular season champions this past season, playing to a 52-12-7-1 mark.

“We had a great year and it didn’t work out how we wanted it to,” said John Paddock, head coach and general manager of the Pats. “Losing hurts. It really hurts and they’re really hurting at the time and will be for a little while.”

Head coach Steve Konowalchuk’s Seattle Thunderbirds close out the 2017 WHL Playoffs with an overall record of 16-4, outscoring opponents 83-51 in the process while boasting a league-leading power play that operated at 35 percent, going 28-for-80.

The T-Birds overcame inter-state rivals in the Tri-City Americans and Everett Silvertips with successive sweeps in rounds one and two before ousting the always-competitive Kelowna Rockets 4-2 in the Western Conference Final.

Their 4-2 series victory over Regina sends them to the 2017 Mastercard Memorial Cup in Windsor where they finalize the list of competing teams alongside the host Windsor Spitfires, the OHL Champion Erie Otters and the QMJHL Champion Saint John Sea Dogs.

Each game of the 2017 Mastercard Memorial Cup will be televised on Sportsnet and TVA Sports.