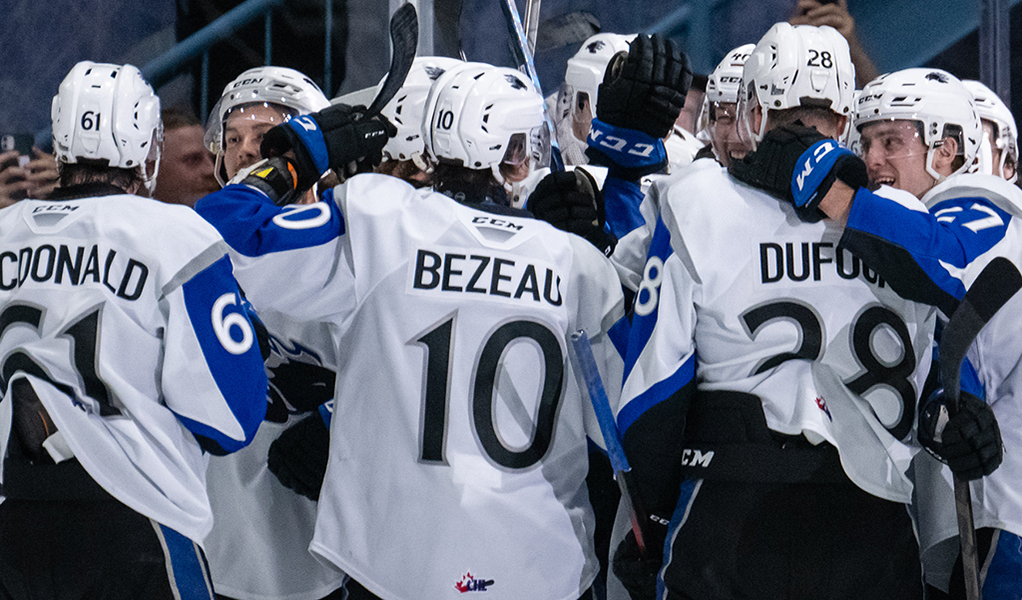 Call him the comeback kid.

Following a lopsided first period in which the host Saint John Sea Dogs allowed three goals to the Shawinigan Cataractes in the final round-robin contest of the 2022 Memorial Cup presented by Kia, momentum shifted in the middle frame led by QMJHL MVP William Dufour.

Getting back into it two minutes into the second period, Dufour scored his first on a one-timer set up from blue-liner and Toronto Maple Leafs draftee William Villeneuve. Not yet finished, Dufour then capitalized again just 21 seconds later when he turned and fired it glove high on Cataractes netminder Antoine Coulombe. It was then a natural hat-trick for Dufour – all coming at even strength – making it three goals in a span of 6:36.

Riding the momentum, and a string of opportunities on the man advantage after the Cataractes were whistled for seven penalties in the second period, the Sea Dogs continued their offensive push, this time drawing from Calgary Flames up-and-comer Jeremie Poirier as the talented blue-liner blasted home a powerplay marker that beat Coulombe blocker high to help Saint John close out the period with a 4-3 edge.

“In the room (after the first), we just said to come back to basics,” Dufour said following the win. “That is what we did and it went pretty well … At the beginning of the tournament, I said that I wanted to have no regrets. I want to give everything I have and I am going to do the same thing on Wednesday.”

Added Sea Dogs head coach Gardiner MacDougall, “(Dufour) is a big horse and you go with your horses. It was a magical second period for him. When your top guys buy in – you look at the shot blocks, the penalty kills – he has grown as a player, as a teammate, and has become a real leader for our group.”

Wrapping up his star-studded performance, Dufour added his fourth of the game in the opening minutes of the third period, doing so on the powerplay before the Sea Dogs ultimately held on for the 5-3 victory.

The 2022 Memorial Cup presented by Kia continues Monday with a Semi-Final showdown between the Hamilton Bulldogs and Shawinigan Cataractes.