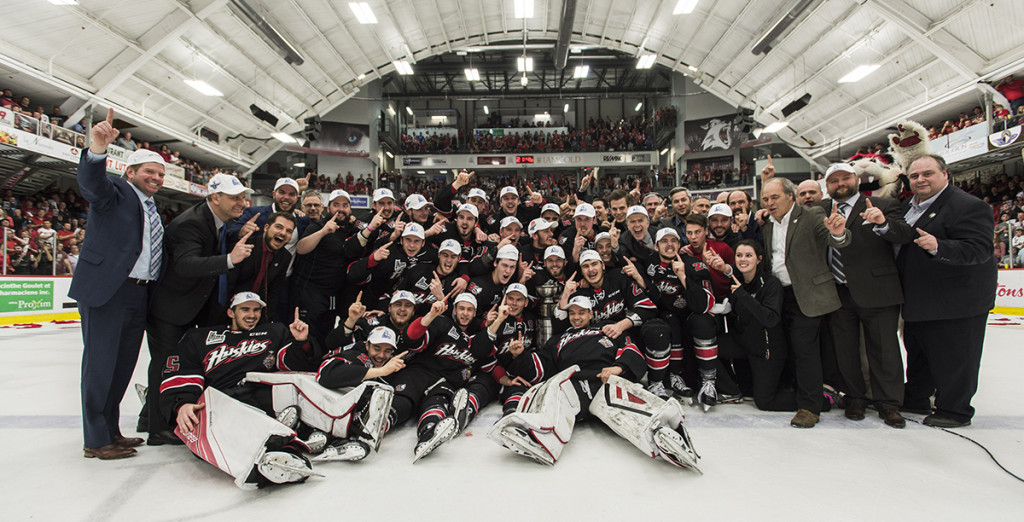 For the first time in franchise history, the Rouyn-Noranda Huskies are President Cup Champions, taking the QMJHL crown following a 7-2 home ice victory over the Shawinigan Cataractes on Thursday to take the QMJHL Championship Series in five games.

Perron’s three points on Thursday set a new franchise record for most points in a playoff year. The Ottawa Senators prospect finished the postseason with 12 goals, 21 assists and 33 points to surpass Sven Andrighetto’s 2013 mark of 30 points.

Perron’s outstanding run also earned him Guy Lafleur Trophy honours as the MVP of the QMJHL Playoffs. He becomes the first player to win both QMJHL regular season and playoff MVP awards since Jonathan Drouin of the Halifax Mooseheads in 2013.

Huskies goaltender Chase Marchand wrapped up a standout playoff performance with a league-leading 1.35 goals-against average, a .946 save percentage and a 15-3-0-0 record over 19 games. His six shutouts contributed to a new QMJHL playoff record of 215 minutes without allowing a goal, a mark set on April 14th.

Rouyn-Noranda went 16-4 over their 20-game playoff run, eliminating the Drummondville Voltigeurs, Blainville-Boisbriand Armada and Moncton Wildcats en route to a showdown with the second place Cataractes who they eliminated with a 4-1 series victory.

The Huskies embark on their first MasterCard Memorial Cup next week in Red Deer, Alberta when they hit the ice on Saturday May 21st against the Western Hockey League champions.

Each game of the annual event will be available on Sportsnet and TVA Sports.