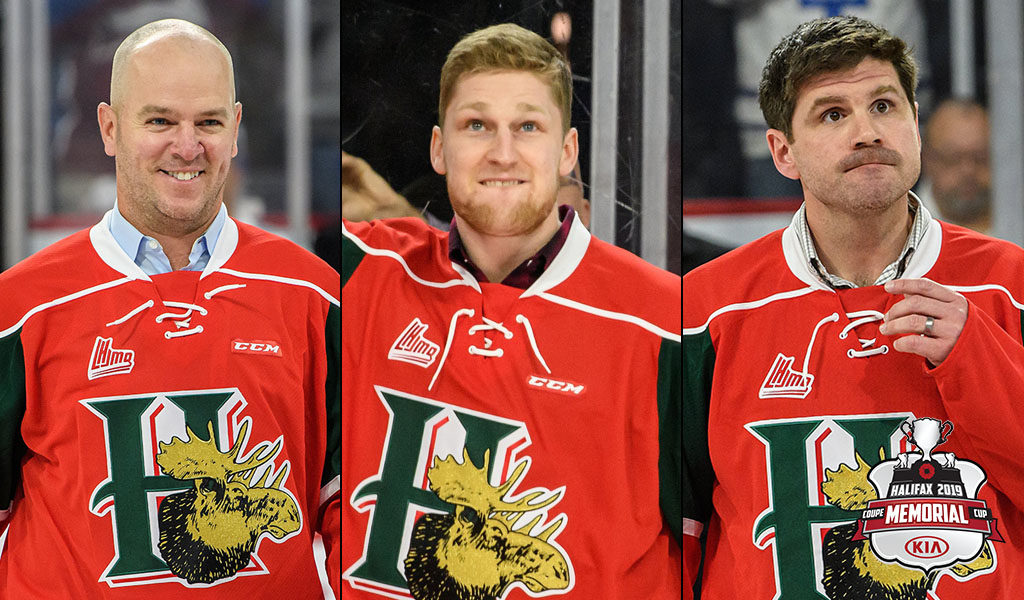 It’s been 20 years since Alex Tanguay played for the Halifax Mooseheads, but fans of the team have not forgotten the star.

As he walked onto the ice for a ceremonial puck drop before a game between the Mooseheads and the Guelph Storm on May 19, the crowd welcomed him with a standing ovation lasting several minutes.

“I was shocked. I didn’t expect it to be that loud,” Tanguay says.

He joined the Mooseheads in 1996 when the team had existed for only two years. Already close to five and a half thousand fans were coming to cheer on the junior team at every game.

“They made that connection with the fans that was unlike any other and you still see it today,” Tanguay says. “The passion that fans here in Halifax have for this team is just special.”

Brandon Benedict agrees. Benedict played for the Mooseheads for five years, leaving in 2003, and holds the franchise record for points, goals and assists, with 303, 119 and 184, respectively.

“[The fan base has] just stayed strong and that’s a credit to the organization and the management of the team,” he says.

Benedict was part of the roster that made it to the semifinal of the 2000 Memorial Cup, the last time Halifax hosted.

“There’s always teams that you reflect on with a lot of positive moments and that was certainly one of those years,” he says.

That year was the first time the team averaged over 8,000 fans attending every game. They hit that mark again in 2013, when the Mooseheads won the President’s Cup, the QMJHL championship, and the Memorial Cup, and again the following season.

“This is a hockey city and year in, year out, the fans come and they support their team unconditionally,” Benedict says.

It’s to the extent that Halifax “could almost have an NHL team, I feel like, with the passion and support of the fans,” says Nathan MacKinnon, the 2013 Memorial Cup tournament MVP and first overall draft pick of the Colorado Avalanche.

Although MacKinnon returns home every summer to Cole Harbour, he hadn’t stepped foot into his former home rink since the 2013 season — until the day of this year’s Memorial Cup championship game.

“To be here, it’s special,” he says. “I get … goosebumps. I have such amazing memories here.”

This year’s Memorial Cup has certainly seen a large contingent of Mooseheads fans, but the Rouyn-Noranda Huskies, Prince Albert Raiders and Guelph Storm have been well-represented by people who have travelled across the country to watch their team.

Tickets for the final game of the tournament sold out on May 13. It all adds up to a packed, loud arena every game — a similarity to the 2000 tournament, Pascal Leclaire says.

“I remember before coming on the ice, with the fans and all the atmosphere, the ice was shaking,” says Leclaire, who was the goalie for the Mooseheads at the time.

Despite such an intense atmosphere, the Mooseheads alumni say that the young players should try to enjoy the experience and leave everything on the ice.

“When you leave here there’s only going to be one team that wins, so you don’t want to leave and feel like there’s any regret,” Tanguay says.