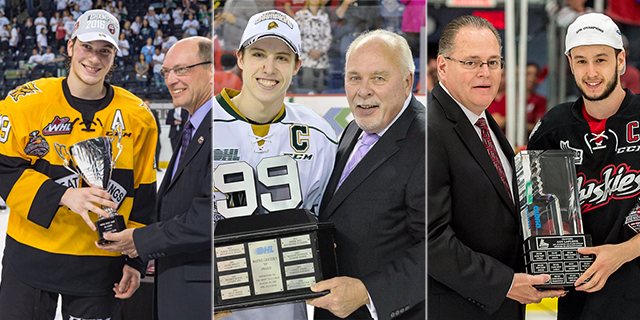 It takes a wealth of depth and contributions from up and down a lineup to win a league championship, but there’s always that one player who rises above the rest, who comes through when you need him most and blazes a trail to success.

Nolan Patrick of the Brandon Wheat Kings, Mitch Marner of the London Knights and Francis Perron of the Rouyn-Noranda Huskies emerged as the Most Valuable Player in championships for their respective clubs, leading them to the 2016 MasterCard Memorial Cup in Red Deer.

“It’s unbelievable, it’s hard to put in words,” Patrick told the Brandon Sun’s Perry Bergson after Game 5. “Losing last year, going all the way and not being able to get it done then coming back with a lot of the same guys to finish it is an unbelievable feeling.”

Patrick’s outstanding sophomore season is one for the Wheat Kings’ record books. He became the first Brandon player to score 100 points in his 17-year old season since Brian Propp and Ray Allison both achieved the feat in 1976-77.

Moving east, Toronto Maple Leafs prospect Mitch Marner of the London Knights put on a display for the record books, becoming the fifth-highest point producer in OHL playoff history with 16 goals, 28 assists and 44 points in 18 contests.

Marner received the Wayne Gretzky ’99’ Award as OHL Playoff MVP, registering a goal and six assists in London’s four game sweep of the Niagara IceDogs in the Rogers OHL Championship Series. Marner finished the playoffs on a 16-game point streak.

Though the Knights scored 84 goals over 18 playoff contests, they also limited opponents to just 40. Marner spoke to London’s defensive commitments after Game 4.

“We’re a team that takes our defence seriously,” he told Ryan Pyette of the London Free Press. “That’s what I think a lot of people don’t get about us. I’m proud of how we’ve been going right now and we’ve got to make sure we stay that route into next week.”

From a team in the London Knights that has won three league championships in the past five years to a team that won its first in 2016, the Rouyn-Noranda Huskies had a tremendous playoff showing from captain Francis Perron.

The Ottawa Senators prospect earned the Guy Lafleur Trophy as QMJHL Playoff MVP after a 7-2 win over the Shawinigan Cataractes in Game 5, one where he recorded three assists.

“My goal was to lead the Huskies to the President Cup and there are 22 other guys who have given their soul and body to win this,” he told Jean-François Vachon of La Frontière Le Citoyen. “This is a special team.”

Perron led QMJHL playoff scoring with 12 goals, 21 assists and 33 points in 18 games along with a plus/minus rating of plus-18. The 20-year-old recorded two goals and seven assists in the President Cup Finals.

The MVP trio heads to Red Deer for the 2016 MasterCard Memorial Cup that gets underway on Friday night when the host Red Deer Rebels take on the OHL Champion London Knights at 6pm MT/8pm ET.