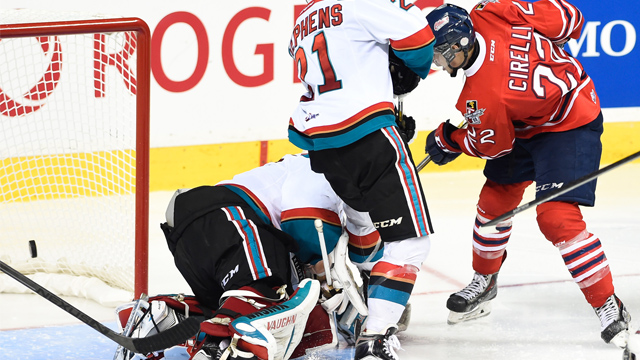 66 years of hockey history came to an end in fine style on Sunday.

Oshawa Generals rookie Anthony Cirelli, who made the team out of training camp as a free agent invitee, buried two goals including the winner just 1:28 into overtime to crown the Oshawa Generals as 2015 MasterCard Memorial Cup Champions.

The final game at the Pepsi Colisée ended in dramatic fashion as the Generals claimed their fifth MasterCard Memorial Cup title in franchise history and first since 1990.

“I came off the bench and Lindberg had the puck,” said an excited Cirelli, who scored the ninth Championship overtime winner in MasterCard Memorial Cup history. “He made a nice pass to Carlisle at the point and I went to the net. Carlise put one on net and fortunately for me I just banged it in.”

“We were ranked number one for so long, we worked so hard and it’s all paid off now.”

Big centreman Michael McCarron was named to the MasterCard Memorial Cup All-Star team with a goal and two assists in four games.

“This is probably the hardest trophy to win in all of sports and I’m so proud of our guys that we did it,” the Montreal Canadiens first round pick said. “The leadership in our locker room is unbelievable. It’s the tightest group I’ve ever been a part of. I can’t thank Oshawa enough for bringing me in.”

The Generals, who were outshot 38-26 in the historic victory, had an outstanding performance in goal from Ken Appleby who made numerous big saves throughout the game.

“The guys have bailed me out all season and they bailed me out a couple times in this tournament so I knew I had to be there for them tonight,” Appleby said. “I can’t say enough about these guys and all of the fans who made the trip. It’s unbelievable.”

The Memorial Cup returns to Ontario for the first time since 2010 as the Generals become the first OHL Eastern Conference team to capture the title since the Ottawa 67’s did so in 1999.

The Rockets had their offensive motor running in the first, with Appleby being forced into a big save off Madison Bowey five minutes in as the Washington Capitals draftee got over the blueline and slinged a wrister that the big Generals goaltender would get a mitt on.

Kelowna took the first lead of the night at 15:08 when Tomas Soustal netted his first of the MasterCard Memorial Cup. The Czech winger went to the net off an offensive zone faceoff win, taking the rebound of Bowey’s shot off the end boards to beat Appleby to the far post for the finish.

The speed and vision of the Rockets seemed to gain an edge in the first period as they outshot Oshawa 9-4.

The Generals, at 7-4-1-1, were the only OHL team this season to record a winning percentage above .500 when trailiing after 20 minutes.

The Rockets continued their strong play into the second period and had it not been for Appleby, the Generals may have found themselves in dire straits.

The big goaltender made saves off both Cole Linaker and Riley Stadel in the same shift five minutes into the period before doing the same to Dillon Dube and Tyson Baillie a shift later.

The Oshawa fans in attendance displayed their approval with a heartfelt chant for the Appleby who kept his club in the game long enough for them to get on the scoresheet.

A Dakota Mermis outlet pass beyond the midway point of the second tilted the scales in Oshawa’s favour as he found a streaking Cirelli busting in on a two-on-one. The Generals rookie opted to shoot, beating Whistle over the glove at 13:50 to knot the score at one and bring the Oshawa fans to their feet.

Kelowna led the shot clock 23-16 headed into the third period of the MasterCard Memorial Cup Final tied at one.

Appleby and Whistle traded saves in the third, putting on a great display for the 10,391 on hand to take in the final game at the Pepsi Colisée.

Oshawa nearly took the lead in the latter half of the third as Cole Cassels drilled a one-timer off the post, inspiring a rebound for Hunter Smith who batted the puck out of mid-air and over the goal line. Upon further review, the goal was ruled a high-stick and waved off.

For the first time since 2012 in Shawinigan, the MasterCard Memorial Cup Final would head to overtime, and it wouldn’t take long for a hero to emerge.

Just 1:28 in, with the ice still wet, Cirelli would finish off a rebound in the slot off a Chris Carlisle slapshot to give the Generals Canadian Hockey League supremacy.