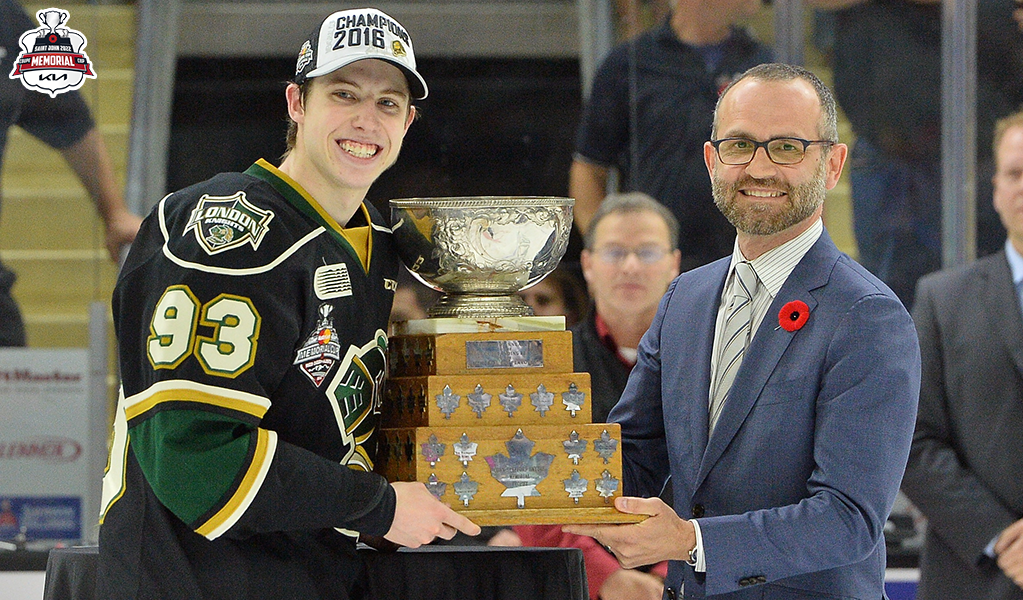 Special players are made by the ability to perform under pressure. That is no better evident than each spring where top talent from championship-caliber clubs goes head-to-head at the Memorial Cup.

As the CHL approaches its first year-end championship in more than two years, we look back at our 10 favourite performances at the Memorial Cup since 2000:

Dylan Strome, Erie Otters (2017) – After beginning the year in the pro ranks with the Arizona Coyotes, hulking centre Dylan Strome returned to the Erie Otters in late November before making the most of his abbreviated season in tallying 75 points in just 35 games. On the national stage, Strome then made headlines at the 2017 Memorial Cup where facing Saint John in round-robin action he scored four times and added three assists en route to a 12-5 final, with his seven-point night marking an all-time high in event history.

Mitch Marner, London Knights (2016) – Forming a terrific trio alongside Christian Dvorak and Matthew Tkachuk, London Knights right-wing Mitch Marner was dominant at the year-end tournament in leading all participants with an astounding 14 points coming in just four games to help the Knights capture their second-ever Memorial Cup, culminating a year in which Marner was named the CHL Player of the Year.

Leon Draisaitl, Kelowna Rockets (2015) – A late-season addition to the Kelowna Rockets, budding centre Leon Draisaitl provided a sneak peak of what was to come in registering a leading seven points in five games at the 2015 Memorial Cup. Despite falling short in overtime versus Oshawa in the championship final, the offensive flair shown by Draisaitl is now being witnessed at the NHL where just five years after concluding his junior career he took home the Hart Trophy as the NHL MVP.

Jonathan Huberdeau, Saint John Sea Dogs (2011) – You can’t talk about dominant performances at the Memorial Cup without mentioning Jonathan Huberdeau who after pocketing 16 goals in QMJHL playoff action continued his impressive tear on the national stage with six points in four games, including a helper on the eventual game-winning goal in the championship final versus host Mississauga. That effort was enough for the Florida Panthers who weeks later called upon Huberdeau third overall in the 2011 NHL Draft.

Taylor Hall, Windsor Spitfires (2010) – Call it an encore performance from Windsor Spitfires left-wing Taylor Hall who after taking home Memorial Cup MVP honours the year prior pulled off the feat once again the following spring, netting a leading nine points in four games to help his squad capture back-to-back CHL titles. The first repeat winner of the Stafford Smythe Memorial Trophy, the honour was part of a hardware-heavy year for Hall who that season also took home the Eddie Powers Memorial Trophy as the OHL’s regular season leading scorer.

Milan Lucic, Vancouver Giants (2007) – A dominant physical presence from an early age, bruising winger Milan Lucic guided his hometown Vancouver Giants to Memorial Cup glory in 2007. Tying for first in tournament scoring with seven points in five games, Lucic came up big in the championship final versus Medicine Hat in picking up a key helper on the eventual game-winning goal. Lucic has since continued his winning ways at the next level as he helped guide the Boston Bruins to a Stanley Cup win in 2011.

Alexander Radulov, Quebec Remparts (2006) – Though he only spent a pair of seasons in the junior ranks, Quebec Remparts winger Alexander Radulov made the most of it where after putting up 152 points in just 62 regular-season contests that later helped him take home CHL Player of the Year honours, the Russian star shined under the bright lights of the 2006 Memorial Cup in coming up with five goals and four assists through four games to help the Remparts win it all.

Corey Perry, London Knights (2005) – With the NHL shuttered and all eyes turned to the junior ranks, the London Knights rewrote the record books by putting together an unforgettable campaign underscored by an undefeated in regulation streak that lasted an astounding 31 games. Key to it all was Anaheim Ducks first-round pick Corey Perry who that season headlined the OHL with 130 points before then continuing his torrent pace at the year-end event in collecting seven points in four games to help the Knights win their first-ever Memorial Cup. Perry has only continued to add to his trophy case in the ensuing years, counting a Stanley Cup win with the Ducks in 2007 and plenty of success on the international stage including a pair of Olympic gold medals.

Brad Richards, Rimouski Oceanic (2000) – Special players perform under pressure and a perfect example of that is Rimouski Oceanic forward Brad Richards who after putting up a staggering 186 points in the regular season then led the Memorial Cup in scoring with 10 points en route to CHL glory. Four years later, Richards was back at it, this time with the Tampa Bay Lightning as he netted 26 points that spring to help the Bolts hoist Lord Stanley.