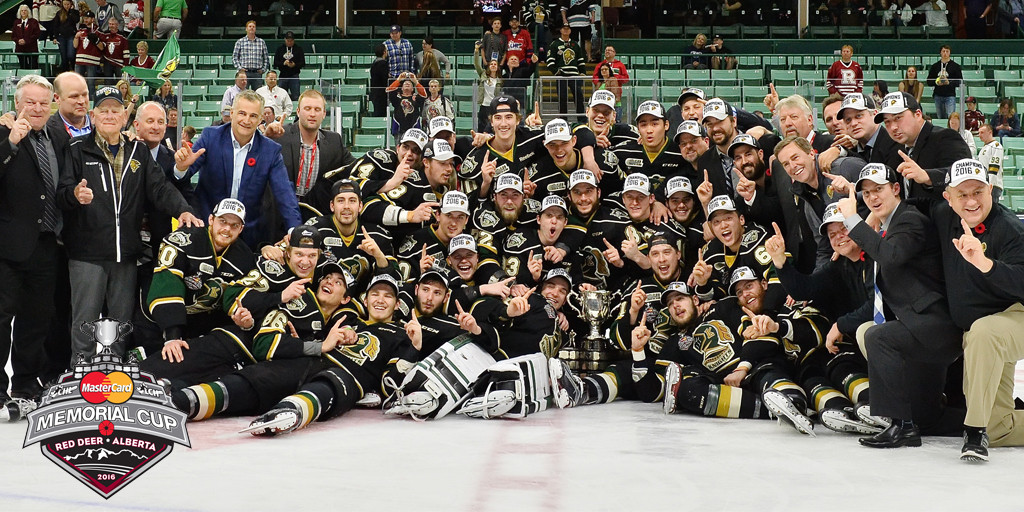 Matthew Tkachuk scored 7:49 into overtime to lead the London Knights to their second Memorial Cup title in franchise history in a hard-fought 3-2 win over the Rouyn-Noranda Huskies.

Tkachuk took a feed from Aiden Jamieson before beating Huskies goaltender Chase Marchand with a quick release over the shoulder, sending the London bench spilling onto the ice in celebration after their 17th straight victory.

“I was coming down with speed and J-Mo (Jamieson) hit me wide and I was able to toe-drag-shoot-it,” Tkachuk said, recounting the goal. “A split second later I look up, everyone is going wild and I fall over. It all happened so fast.”

Short for breath, Tkachuk’s excitement as his teammates raised the Memorial Cup was summed up in a few words.

The London victory saw the Knights overcome a late one-goal deficit on Christian Dvorak’s tying marker at 15:49 of the third period to know the score at two.

Knights forward Mitch Marner was awarded with the Stafford Smythe Memorial Trophy as MasterCard Memorial Cup MVP. The Toronto Maple Leafs prospect recorded an assist in the win to extend his point streak to 20 games and record an overall total of 14 points (2-12–14) over four games.

“We’re down 2-1 there in the third with four minutes left and we never gave up, but that’s the best thing about this team,” said Marner. “We always come back and never give up on each other and it’s amazing.”

Both goaltenders were outstanding, going save-for-save right down to the end.

“I have to firstly give credit to the other guy,” Parsons said of Rouyn-Noranda’s Chase Marchand. “He made some unbelievable saves, kept them in the game all night long and he’s a great goaltender.”

“I love these guys,” Parsons continued. “I can’t even describe the feeling right now. We knew what we had to do being down a goal and once we got thing to overtime we had the momentum on our side. We left it all out on the ice and we’re champions.”

The QMJHL champion Rouyn-Noranda Huskies saw a late lead slip away, but recently named CHL Coach of the Year Gilles Bouchard was proud of his players and their no-quit approach all season long.

“My guys played like champions,” said Bouchard. “Even with injuries we didn’t stop battling. In overtime, a bounce can go for either teams. We can’t hide, I am proud of the Huskies.”

As anticipated, the game was a fast-paced one as both clubs had their share of quality chances throughout the contest.

After being twice denied by Marchand in the early going, the Knights had a golden opportunity to take out an early lead as co-captains Marner and Christian Dvorak came in on a two-on-one. Marner got a shot away from close quarters as Marchand got a piece of the puck, sending it trickling through the goalmouth. The Huskies had a chance in transition as Parsons made his first big save of the afternoon, getting his glove on a shot by Nikolas Brouillard off the rush.

The Knights led the shooting column 8-3 midway through the first and went on to outshoot Rouyn-Noranda 11-6 in a scoreless period.

The Knights put the Huskies under siege on the power play in the first half of the second, but key shot blocking and Marchand’s continued stellar performance helped them weather the storm.The overage netminder made his best save of the afternoon off Aaron Berisha on the doorstep as the Knights winger took a perfect feed from Tkachuk but couldn’t beat the glove of Marchand.

Parsons would counter with a big save off Martins Dzierkals, setting up London’s first goal in transition as Marner gained the blueline before throwing a puck toward the goal that was tipped past Marchand by Matthew Tkachuk in the slot at 9:19.

Rouyn-Noranda’s big line countered though, scoring a shift later at 9:34 when Timo Meier curled around the net and centred for an oncoming Francis Perron to tie the score at one.

Pressing inside the final two minutes of the second, the Huskies would gain their first man advantage of the afternoon, hemming the Knights inside their own zone as Parsons was forced into a number of big saves to keep the score tied 1-1 headed to the intermission.

The Huskies outshot the Knights 16-10 in the second.

The Knights couldn’t capitalize on a glorious chance to start the third as a sprawling save by Marchand denied JJ Piccinich of the game’s go-ahead goal two and a half minutes in.

The Huskies nearly climbed ahead in the period’s 12th minute as Alexandre Fortin gained himself time and space in the slot, glancing a shot off the crossbar past a screened Parsons as the London goaltender scrambled to smother the rebound and preserve the 1-1 stalemate.

Fortin would come through at 9:13 though, using his speed to blaze down the wing and find Colorado Avalanche prospect Julien Nantel coming down the middle for the one-timer to beat Parsons as the Huskies led by a goal with half the period remaining.

The Knights battled back, tying the score at two with 4:11 left as Max Jones and Aaron Berisha combined to win a board battle down low off the forecheck. Berisha would come away with the puck and centre for Dvorak who beat Marchand with a quick release.

Parsons kept the game tied with a quick glove save off Timo Meier a shift later as the Huskies won an offensive zone draw, allowing Meier to spin and shoot for a quality scoring chance.

Marner nearly won the game with 29 seconds remaining, taking a feed from Dvorak in the slot before ringing a shot off the iron as regulation time wound down with the score knotted at two.

For the second straight year and 10th time since 1972, the MasterCard Memorial Cup Final spilled into overtime.

After the Knights nearly won the game earlier in the extra frame, Tkachuk came through with a shot heard across the country, giving the Knights a 3-2 win in front of a sold out crowd at the ENMAX Centrium.

The 2016 Memorial Cup title follows up their only other CHL crown 11 years ago to the day in 2005 when Corey Perry, David Bolland, Rob Schremp and company defeated Sidney Crosby’s Rimouski Oceanic 4-0 on home ice.

The Knights played to a perfect 4-0 record at the 2016 MasterCard Memorial Cup, outscoring opponents 23-8.

Knights defenceman Olli Juolevi became the 23rd player in tournament history to hoist the Memorial Cup in the same year as having won World Junior Hockey Championship gold. Juolevi claimed World Junior supremacy with Finland in January, becoming the first player to accomplish both feats since Windsor’s Cam Fowler did so in 2010.

The London Knights are the 98th MasterCard Memorial Cup champion in the event’s history, bringing the trophy back to the Ontario Hockey League for a second straight season.