Knights advance to finals with 5-2 win 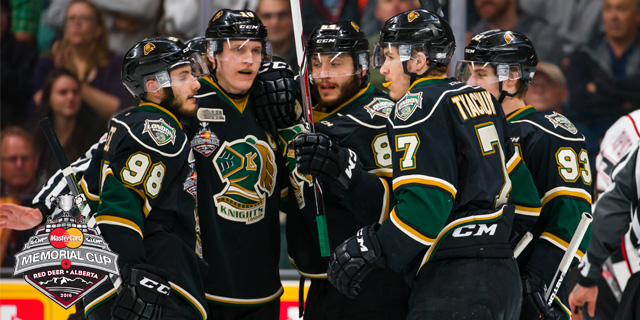 The London Knights used an excellent special teams performance to defeat the QMJHL champion Rouyn-Noranda Huskies 5-2 on Tuesday to improve to 3-0 and punch their ticket to Sunday’s MasterCard Memorial Cup Final.

London went 3-for-7 on the power play and killed off eight of Rouyn-Noranda’s 10 powerplays in their 16th consecutive victory. Matthew Tkachuk registered two goals and an assist and Mitch Marner recorded four helpers, bringing his tournament point total to 13 over three games, three off the MasterCard Memorial Cup record of 16.

Goaltender Tyler Parsons was big when called upon, turning aside 30 of the 32 shots he faced as the Knights have now outscored opponents 20-5 at the 2016 MasterCard Memorial Cup.

“We had a lot of penalties against us in the second and I knew I needed to be the backbone of the team and make a few big saves to keep us going,” said Parsons. “The Huskies are a fast team that played us hard tonight.”

Rouyn-Noranda came hard at London throughout the second period, going on three straight power plays including one on a five-minute major charged to Chandler Yakimowicz. The Huskies outshot the Knights 12-7  in the period, but the Knights still came away leading 3-1 after 40 minutes.

“We’ve faced a lot of adversity throughout the season,” said Max Jones post-game. “Game 3 of our Niagara series they had a bunch of power plays and we didn’t get any and we ended up winning in overtime, so we’ve overcome tough situations before. We just need to stay focused, not get frustrated and stick to our game.”

The power play struck early in the first as JJ Piccinich got the black and green on the board 6:06 into action. The Toronto Maple Leafs prospect banked a shot past Chase Marchand off a Huskies defender with assists going to Dvorak and Marner as the two extended their point streaks to 19 games.

The Knights nearly extended their lead to 2-0 a few shifts later, but a Marchand glove save off Cliff Pu on a shorthanded breakaway kept the Huskies within one.

London’s power play would prevail once again before the end of the first though. Draft eligible rearguard Olli Juolevi found a lane to the net, sending a wrister to the goal that was tipped in the slot by Tkachuk for his second of the tournament at 17:43.

London carried a 2-0 lead into the second as the two clubs each had nine shots in the opening frame.

After a parade to the penalty box in the first, the Knights would face a second period spent largely on the penalty kill, getting whistled for three straight infractions including the aforementioned checking from behind major to Yakimowicz.

London successfully killed off the five minutes thanks to some big saves from Parsons, but Rouyn-Noranda’s power play would come through before the period expired.

Antoine Waked fed a waiting Timo Meier as he crept in off the top of the circles to beat Parsons with a hard wrister over the glove at 10:04 to give the Huskies life down 2-1.

London would reinstate the two-goal cushion with 2:32 to spare in the second. 2016 NHL Draft prospect Max Jones was the first man into the Rouyn-Noranda zone shorthanded to collect a loose puck, dishing to Marner who was coming down the middle to promptly return a give-and-go to Jones who had an open net for the finish.

London’s power play would continue to click prior to the midway point of the third. Defenceman Victor Mete snapped a low wrister on goal through traffic, prompting a rebound for Christian Dvorak as the Arizona Coyotes prospect tapped it past Marchand to give the Knights a 4-1 lead at 6:20.

Rouyn-Noranda narrowed the London lead to two after a puck that seemingly rolled wide of the post was ruled a goal upon video review moments later. Waked found Meier once again as the San Jose Sharks prospect picked up his second goal of the night, rolling a low shot underneath the bottom of the net and out the other side at 7:59.

The Knights would add an empty net goal off the stick of Tkachuk to seal the deal on the 5-2 win and advance to their first MasterCard Memorial Cup Final since 2012 in Shawinigan.

London’s dominant performance in Red Deer marks the third straight year that the OHL champion has gone 3-0 in the round robin to advance to the MasterCard Memorial Cup Final, with the Guelph Storm losing to the Edmonton Oil Kings in 2014 and the Oshawa Generals moving on to defeat the Kelowna Rockets in overtime last May in Quebec City.

With four days until the championship game, the Knights will set out for a team trip to Banff, a two-and-a-half hour trip west.

Rouyn-Noranda falls to 1-2 in the tournament. They’ll await the result of a matchup between the Brandon Wheat Kings and host Red Deer Rebels on Wednesday to determine their fate.

The Red Deer Rebels and Brandon Wheat Kings close out the round robin on Wednesday at 6:00pm MT/8:00pm ET on Sportsnet.