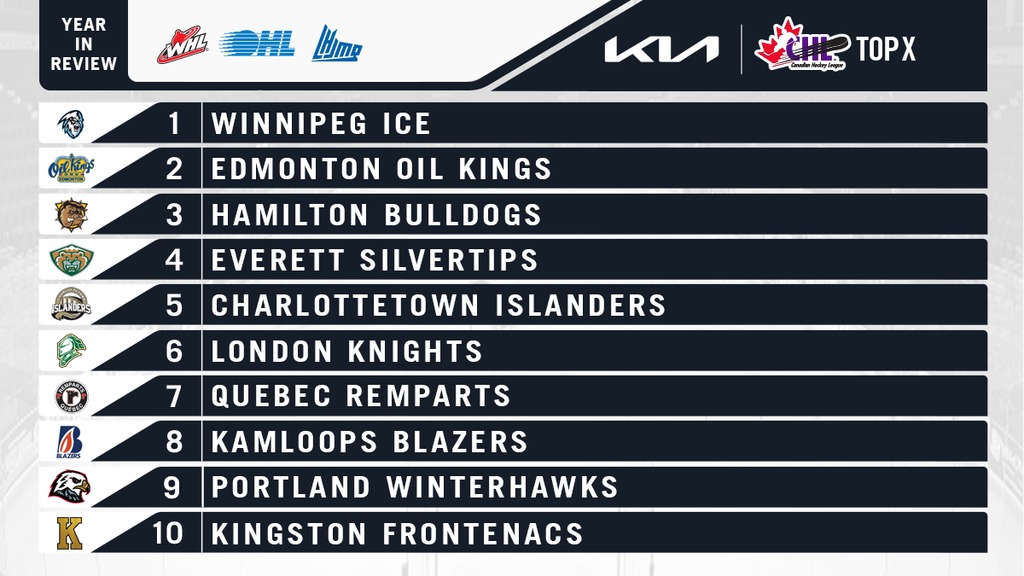 Wrapping up 2021-22 with a franchise record of 111 points, the ICE reigned supreme for much of the season, standing atop the circuit 13 times including a 12-week run in which the club went unseated. Bringing a dynamic offensive attack, the ICE saw four players score at least 70 points led by Matthew Savoie, a projected first-round selection in the 2022 NHL Draft who headlined all WHL freshmen with an astounding 90 points.

Surging in the second half, the Bulldogs saw top spot honours three times to close out the year after making the most of the return of gifted right-wing Ryan Winterton, a Seattle Kraken draftee who missed the first three months of the season due to injury, plus the deadline addition of Mason McTavish, the third-overall selection from the 2021 NHL Draft who added another offensive gear to a Hamilton squad that was one of only two OHL clubs to reach 300 goals.

Finishing atop the U.S. Division for the ninth time since joining the WHL in 2003, the veteran savvy Silvertips earned time on the national stage 22 times this season highlighted by four occasions at second overall. Headlined by seasoned scorers like overage centre Alex Swetlikoff and 2002-born right-wing and co-captain Jackson Berezowski, another name to circle in Everett came on the blue line in Anaheim Ducks draftee Olen Zellweger who led all WHL rearguards with 78 points.

Leading the way in the QMJHL for much of 2021-22, the Islanders saw time in the spotlight 20 times this season, ranking seventh or better along the way. Up front, the Islanders witnessed an offensive breakout from veteran left-wing Patrick Guay whose 51 goals set a new high-water mark for the franchise, while from the blue line Vegas Golden Knights prospect and reigning QMJHL Defenceman of the Year Lukas Cormier continued to flash his offensive dominance in collecting 78 points.

Always a force in the OHL, 2021-22 was no different for the Knights as the club earned national recognition 12 times including three consecutive weeks at second overall. Among the highlights was the offensive progression from Nashville Predators up-and-comer Luke Evangelista who nearly doubled his rookie-season finish in coming up with 111 points, good for fourth-best in the OHL scoring race, while in the blue paint undrafted netminder Brett Brochu continued to give the scouting community reason for reconsideration as he ranked amongst the league’s best.

Entering the season among the favourites to hoist the Memorial Cup, the Remparts have not disappointed where after earning top-two recognition for the first four weeks of the season the squad now stands first in the QMJHL with 98 points and three games remaining. Headlined by the dynamic duo of St. Louis Blues first rounder Zachary Bolduc as well as veteran forward Theo Rochette – both of whom rank inside the top-10 QMJHL scorers – the Remparts are also solid between the pipes where the tandem of Fabio Iacobo and William Rousseau turn aside the competition with regularity.

The WHL’s B.C. Division titlist for the third year running, the Blazers stepped into the spotlight in all but three occasions this season, including a span of 22 weeks consecutively. Leading the way in Kamloops was hometown product and Dallas Stars draftee Logan Stankoven who in his first season sporting the captaincy backed it up offensively to the tune of 104 points, good for first in team scoring and third-best league wide.

Earning national recognition 12 times this season, the Winterhawks were particularly dominant in the second half including a lone regulation loss in the squad’s final 10 outings to enter the postseason on a high note. Adding veteran experience between the pipes, recent Pittsburgh Penguins signee Taylor Gauthier proved to be a solid acquisition as he won 24 of 28 games following his midseason arrival that was underscored by a franchise-record shutout streak of more than 250 minutes.

This season, the Frontenacs saw national recognition 14 times including back-to-back occasions as the OHL’s top-ranked team. With much of the focus on the Frontenacs zeroing in on Shane Wright, the 2022 NHL Draft favourite impressed as part of a four-pronged attack up front, each of whom closed out the regular season with at least 80 points. In all, the group also counted Los Angeles Kings draftee Martin Chromiak plus talented overagers Jordan Frasca and Lucas Edmonds, the latter who finished third in OHL scoring with 113 points.