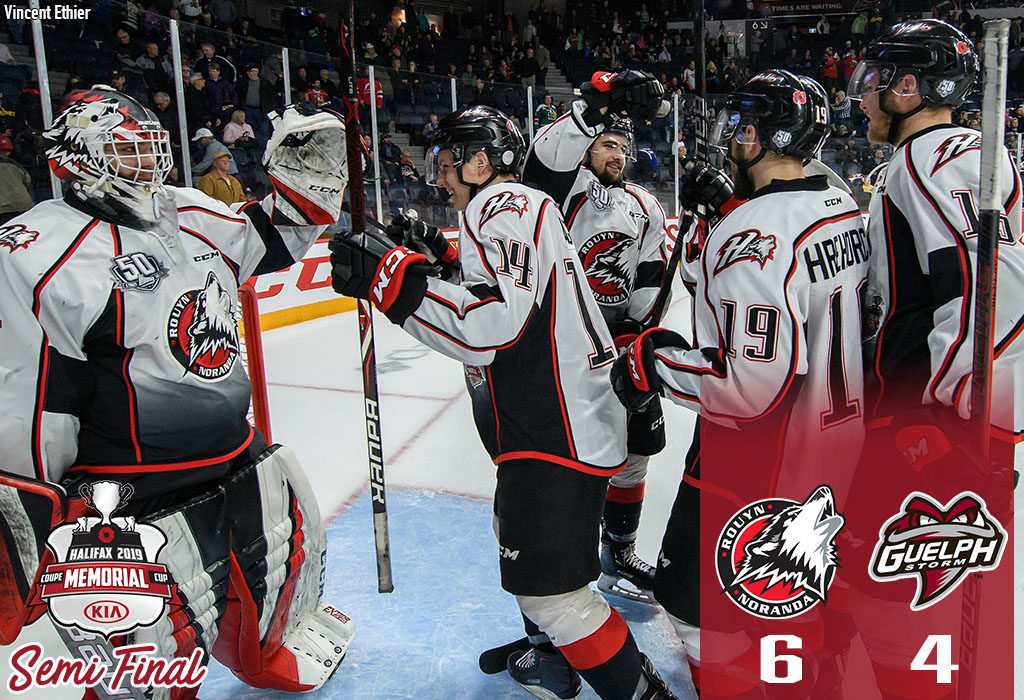 A pair of third period goals from Felix Bibeau turned out to be the difference in a highly entertaining back-and-forth Semi-Final matchup as the Rouyn-Noranda Huskies are headed to Sunday’s Memorial Cup Final following a 6-4 win.

A relentless Rouyn-Noranda forecheck wore down a Guelph Storm club that stayed within striking distance until the very end, looking as though they had one more miraculous comeback in them before time expired on their championship season.

20-year-old forward scores twice in third period to lead @QMJHL’s @HuskiesRn to a 6-4 victory and a berth in Sunday’s #MemorialCup Championship Final ? pic.twitter.com/YdQ2bNgR3X

The Huskies are back in the Championship Final for the first time since losing to the London Knights in overtime at the 2016 Memorial Cup in Red Deer. They’ll take on the host Halifax Mooseheads on Sunday, a team they defeated to hoist the QMJHL’s President’s Cup in six games this past month.

“Our line, our whole team in the third we had a lot of energy and we were pressing their defence and they were turning pucks over,” said Bibeau of the late effort. “When you put pressure on even the best players they’re going to make mistakes and we capitalized on them and it was a huge win for us.”

The thrilling victory gave Bibeau a moment of pause as he reflected on how far the franchise has come over the past three seasons.

“We grew up here together,” he said. “Most of the guys we came in here three years ago and we started from the bottom and we went up and it’s a great feeling to grow up with these guys and get down to the final two teams. We’re really proud of our team that’s for sure.”

The two sides swapped goals in the first period with draft eligible winger Alex Beaucage getting the scoring started with his first of the tournament 4:58 into action. The speed of Boston Bruins prospect Jakub Lauko created an opportunity for Beaucage coming down the middle who finished off a broken play on the backhand.

The Storm struck back with two quick ones exactly one minute apart. Captain Isaac Ratcliffe finished-off a two-on-one with MacKenzie Entwistle at 6:28, snapping a release over the shoulder of Samuel Harvey before overage defenceman Jack Hanley whistled a point shot through traffic to put the Storm ahead 2-1.

Nothing beats a sellout. These fans are loud and on the edge of their seats as the @Storm_City and @HuskiesRn do battle for a shot in the #2019MemorialCup championship game.#OneToRemember pic.twitter.com/BOCDnIfXGv

Montreal Canadiens prospect Joel Teasdale went to work on the forecheck at the midway point of the first, separating his man from the puck before snapping a release over the shoulder of Anthony Popovich on the short side at 9:31.

The two teams entered the second period tied at two while also knotted in shots on goal at 11 apiece.

Undersized Guelph spark plug Cedric Ralph provided a goal-scorer’s goal 5:53 into the second period to put the Storm ahead once again. Zach Roberts picked up his first assist of the tournament, connecting with Ralph busting through the middle before he beat Harvey upstairs and give Guelph a 3-2 lead.

The Huskies wasted no time answering back as Tyler Hinam’s third of the tournament came off a Peter Abbandonato offensive zone faceoff win. Hinam fired a quick shot past Popovich as soon as the puck landed on his stick to tie the score at three after two periods.

Bibeau’s pair came just under seven minutes apart at 5:40 and 12:33. Harvey-Pinard set up the first goal, finding an open Bibeau in the high slot from the half-wall as the 20-year-old beat Popovich through a crowd. Lauko’s play below the goal line paid dividends to put Rouyn-Noranda up 5-3 as the Czech winger rolled off his check before working the puck into the slot for a waiting Bibeau who provided the finish for his fourth of the tournament.

Huskies defender Noah Dobson, who played north of 35 minutes in the Semi-Final clash, missed an opportunity to put things out of reach with 3:06 to go. The New York Islanders prospect was hooked on a breakaway, resulting in a penalty shot that Popovich denied to keep the Storm within two.

The Storm pressed hard in the late going as Ratcliffe scored his second of the night with Popovich on the bench for the extra attacker at 18:47. The 6-foot-6 winger camped out to the side of the goal, taking a feed from Entwistle to bring the big Halifax crowd to its feet with the Storm down 5-4.

Guelph went back to work in the offensive zone on the game’s final shift as Entwistle narrowly missed an open cage, glancing a shot off the side of the net before Harvey-Pinard blocked a Dmitri Samorukov point blast before putting things on ice with an empty netter in the 6-4 final.

The OHL champion Storm see their thrilling ride come to an end, finally losing an elimination game after rattling off seven in a row throughout the OHL Playoffs to win their fourth J. Ross Robertson Cup title in franchise history.

“The last nine weeks have been quite a ride for sure,” said Storm head coach George Burnett. “I didn’t think we were our best tonight. Give them a lot of credit, behind our blue line they were a little stronger than we were and some of the choices we made. We still had an opportunity late in the game with the goalie out to even it up.

“I’m so proud of the way our guys have worked from top to bottom, big role or small,” Burnett continued. “It’s been a lot of fun, they’re a very quality group of young guys that should be very proud of their efforts throughout the playoffs and here in the tournament. They’ve represented our city well and our league, but it is disappointing to come up a little short of the Final.”

Rouyn-Noranda outshot Guelph 39-38 in a free-flowing game that saw just three power plays. The Huskies victory came before a crowd of 10,595 in Halifax.

The Huskies and host Halifax Mooseheads will play for the eighth time in less than a month on Sunday at 7:00pm ET/4:00pm PT as a QMJHL team will be crowned Memorial Cup champion to close out the 2018-19 campaign.