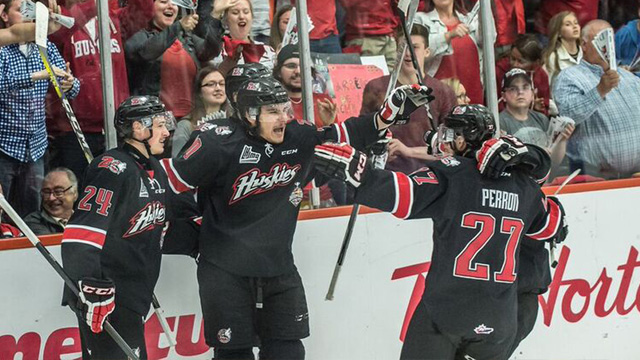 For the first time in franchise history, the Rouyn-Noranda Huskies are President Cup Champions and headed to the MasterCard Memorial Cup.

The dominant Huskies squad went wire-to-wire this past season, claiming the Jean Rougeau Trophy as QMJHL regular season champions with a 54-9-3-2 record for 113 points.

Rouyn-Noranda marched through the QMJHL playoffs, eliminating Drummondville, Blainville-Boisbriand and Moncton before a championship showdown against second-placed Shawinigan.

The Huskies would take the series in five games, capped by a two-goal effort from Toronto Maple Leafs prospect Martins Dzierkals in Game 5 as Rouyn-Noranda hoisted the President Cup in front of a packed house at IAMGOLD Arena.

“I have no words, it’s indescribable,” he told Jean-François Vachon of La Frontière Le Citoyen. “We won this cup for our fans.”

Perron went on to credit goaltender Chase Marchand for his tremendous display of goaltending throughout the season, and he was indeed outstanding.

That dominance carried into the playoffs as the Upper Tantallon, Nova Scotia native set a new QMJHL shutout streak record spanning 223 minutes and 23 seconds. Marchand led all goaltenders with a 1.35 goals-against average, a .946 save percentage and six shutouts during the playoffs.

“I always took things one day at a time, but it was an adventure,” said Marchand of his tremendous season. “Every day was fun and unique. I have learned so much here.”

The Huskies scored a QMJHL-leading 302 goals during the regular season, a figure supported by firepower in San Jose Sharks first round pick Timo Meier, Colorado Avalanche prospects Jean-Christophe Beaudin and A.J. Greer and the always-reliable contributions of Perron.

The Huskies head to Red Deer hoping to make their first MasterCard Memorial Cup a memorable one and join the 2006 Quebec Remparts, 2011 Saint John Sea Dogs, 2012 Shawinigan Cataractes and 2013 Halifax Mooseheads as the fifth QMJHL team in the past 10 years to hoist the Canadian Hockey League’s most prized possession.

The Huskies square off against the WHL Champion Brandon Wheat Kings on Saturday May 21st to begin their 2016 MasterCard Memorial Cup schedule.