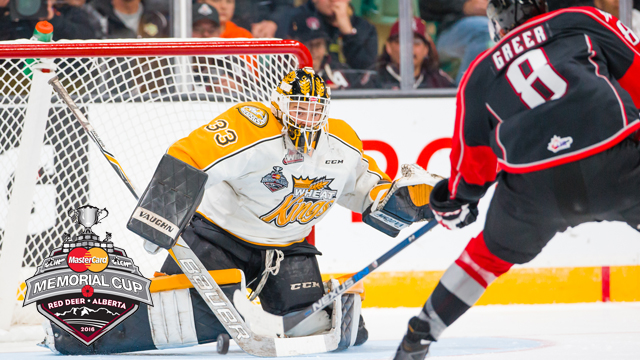 The Brandon Wheat Kings had the flash and dazzle in the final 20 minutes, getting a highlight reel goal from John Quenneville, but the Rouyn-Noranda Huskies escaped with two points in Game 2 of the MasterCard Memorial Cup in Red Deer on Saturday.

Despite being outshot 20-4 in the third period, the Huskies hung on for a 5-3 victory as goaltender Chase Marchand made 38 saves to preserve the win behind a pair of goals from San Jose Sharks first round pick Timo Meier.

Brandon was thwarted on numerous high-quality scoring chances in the third as Marchand made big saves on Jayce Hawryluk, Nolan Patrick and Macoy Erkamps in the game’s final ten minutes.

“I thought we did the good things through the first 40 minutes. We played with speed, we moved the puck, we played a north and south game,” said Huskies head coach Gilles Bouchard. “In the third period we played to the score. It was 5-1 after the second and we stopped moving our feet, we stopped working and our mindset wasn’t good. We saw two different things today but we found a way to win the game.”

Rouyn-Noranda’s five goal output was fueled by Meier as well as captain Francis Perron who had three assists along with Alexandre Fortin who had a pair of helpers as well.

“I thought we did a good job for most of the game,” said Meier. “We definitely let down in the third period. We managed to win the game today, but we have to get better. We got away from our game, stopped working. You can’t do it against a team like that.”

A free-flowing first period saw plenty of physicality as the Wheat Kings got on the board first on a goal from Minnesota Wild prospect Reid Duke. Camped out on the doorstep, Duke banged in a loose puck in the slot as James Shearer and Tim McGauley gathered assists, giving the gold jerseys in attendance at the sold out ENMAX Centrium an early boost.

With their well-advertised blend of speed and puck movement, the Huskies rebounded from the early deficit in the latter half of the period as goals from A.J. Greer, Gabriel Fontaine and Timo Meier came in the final six minutes to give the pack a 3-1 lead at the intermission.

Greer was sprung in alone by blueliner Jérémy Lauzon who took a feed from out of the penalty box and quickly dished to Greer who beat Brandon’s Jordan Papirny on a forehand deke through the five-hole.

Bruno-Carl Denis put a seeing-eye shot through traffic that hit a Wheat Kings defender en route to the goal before Fontaine directed the fluttering puck past Papirny at 18:33.

Meier rounded out the first period scoring less than a minute later, taking advantage of a carom off the end boards on Allan Caron’s wide point shot. Meier scooped up the loose puck and beat Papirny across the crease to give the Husies a two-goal lead.

The goaltenders shone early in the second frame as Marchand denied Duke on a one-timer coming down the middle five minutes into action.

Papirny and Marchand swapped saves a few shifts later, with Papirny denying A.J. Greer of his second of the night on a two-on-one before Marchand stopped Kale Clague in transition.

The Huskies got back on the offensive, striking on the power play at 13:29 on a point wrister by Philadelphia Flyers prospect Philippe Myers.

Timo Meier would beat Papirny on a wrister from down the wing for his second of the night at 17:10 to give Rouyn-Noranda a 5-1 lead heading into the third period.

Brandon didn’t let up in the third despite trailing by four. The Wheat Kings outshot Rouyn-Noranda 7-1 in the opening 10 minutes, drawing closer when Tyler Coulter knocked in a loose puck on a goalmouth scramble at 8:07.

Quenneville scored the goal of the MasterCard Memorial Cup to this point at 12:14, taking an up-ice feed from Ivan Provorov before undressing Marchand with an inverted, through-the-legs deke to send the puck up under the cross bar as the ENMAX Centrium erupted.

Marchand took over for the Huskies, rescuing their fading lead with some big saves as the Wheat Kings continued to wrestle the momentum away. The overage netminder turned away 100-point scorers Hawryluk and Patrick inside the final 10 minutes before taking a quality scoring chance away from Erkamps walking in off the blueline moments later.

Marchand’s 18 third period saves proved big on Saturday as the Huskies held on for an ever-important opening game victory at the MasterCard Memorial Cup despite being outshot 41-29.

Prior to puck drop, firefighters Mike Scott and Matt Mellon were met with a standing ovation at the ENMAX Centrium for their service fighting the recent blaze in Fort McMurray, Alberta. The Canadian Hockey League has currently joined forces with MasterCard and the MasterCard Memorial Cup Host Organizing Committee to make a collective minimum financial contribution of $150,000 to the Canadian Red Cross in support of Fort McMurray.

The Rouyn-Noranda Huskies are back in action against the host Red Deer Rebels on Sunday at 5:00pm MT/7:00pm ET while the Brandon Wheat Kings will try and rebound on Monday against the OHL champion London Knights at 6:00pm MT/8:00pm ET.