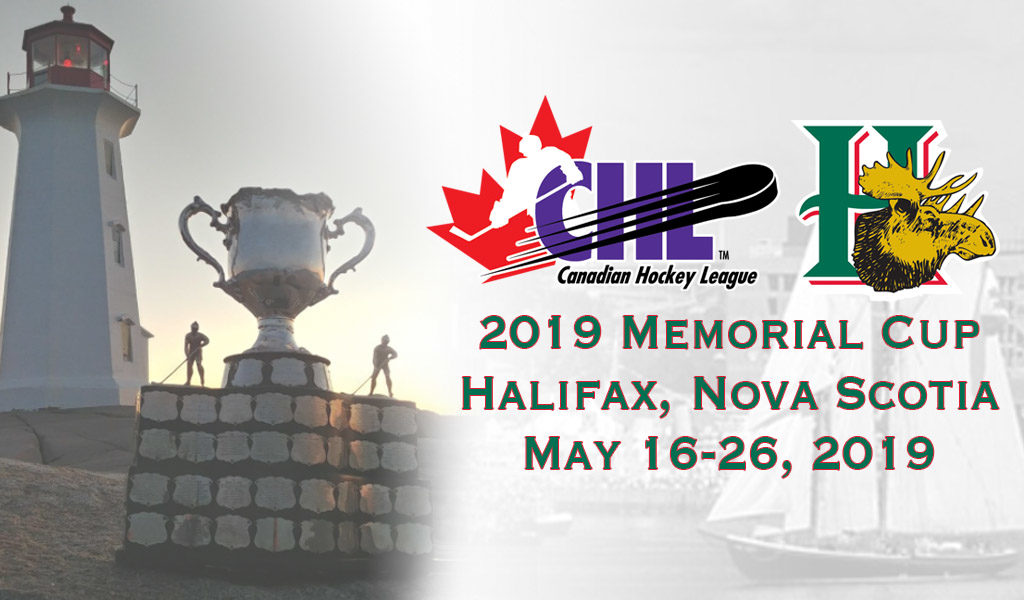 “The organizing committee did an outstanding job in their bid presentation and proved that they are able to meet the expectations to host this prestigious event,” said QMJHL Commissioner Gilles Courteau. “We are extremely excited to have the Memorial Cup tournament back in the QMJHL. The City of Halifax has proven in the past that they have all the resources to host world-class events and we are looking forward to seeing some of the best CHL teams and players go head-to-head next year.”

The 101st edition of the Memorial Cup will take place from May 16 to 26, 2019, and includes the host Mooseheads along with the champions of the Quebec Major Junior Hockey League, the Ontario Hockey League, and the Western Hockey League.

“We’re very pleased for our hockey team, for our players and for our fans. Everyone is extremely excited. The city is ready, the downtown has become a beautiful place, the province has been behind us the whole way and it is going to be a great Memorial Cup in Halifax”, said the Governor and President of the Mooseheads, Bobby Smith.

The prestigious national championship returns to the City of Halifax for the first time since 2000, which also included the champion Rimouski Océanic (QMJHL), the Barrie Colts (OHL), and the Kootenay Ice (WHL).

“Nineteen years ago has been a long time, but the people still talk about the Memorial Cup. I guarantee it’ll be a Memorial Cup that fans enjoy. The story will be a full arena and a great experience for the players”, added Mr. Smith.

Since the round-robin format was introduced in 1972, QMJHL teams have won a total of 10 Memorial Cup Championships, including the 2013 Halifax Mooseheads. During the event, Mooseheads forward Jonathan Drouin set a Memorial Cup record by collecting five assists in a single game.

The Regina Pats will play host to the 2018 Mastercard Memorial Cup. It will be the 100th edition of the event. From May 17th to 27th, the best teams from throughout the CHL will compete in Regina, SK, for a shot at hockey’s most difficult trophy to win.

Information regarding ticket packages and other local initiatives for the 2019 Memorial Cup will be announced by the Host Committee in the upcoming weeks. The best opportunity to secure priority access event tickets is to become a Halifax Mooseheads season ticket holder. For details, please visit http://halifaxmooseheads.ca.