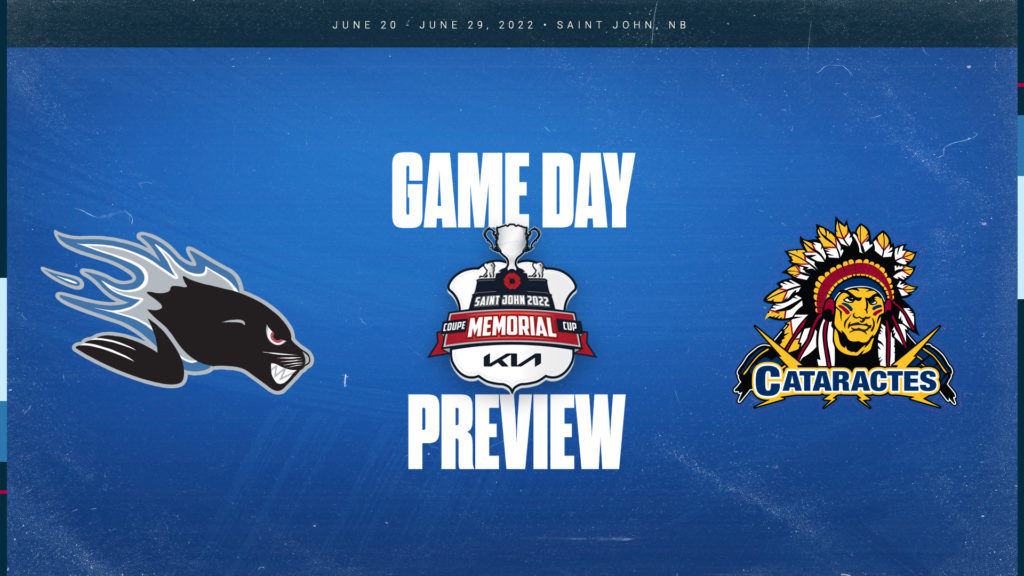 The final game of the round-robin portion of the 2022 Memorial Cup presented by Kia takes place later today as the host Saint John Sea Dogs face the Shawinigan Cataractes.

Simply put, a spot in the 2022 Memorial Cup final is on the line today.

If the Sea Dogs win in regulation, they will head straight to Wednesday’s final. If the Cataractes collect one point, they will be play for the second Memorial Cup in franchise history.

The Hamilton Bulldogs are lying in wait for Monday’s semi-final after they eliminated the Edmonton Oil Kings Friday night.

Shawinigan controls their own fate after back-to-back wins to open the tournament. The President Cup champions beat Edmonton 4-3 Tuesday and then defeated Hamilton Wednesday 3-2.

The Cataractes own the second best power play in the tournament at 33.3 per cent while their 88.9 per cent penalty kill is ranked no. 1.

With their two straight wins, the Cataractes are now 8-4 all-time at the Memorial Cup.

Saint John opened the tournament with a 5-3 victory over the Bulldogs Monday before they collected a point in an overtime loss to the Oil Kings Wednesday.

The Sea Dogs are the only team in the tournament yet to score on the man advantage while their penalty kill has allowed four goals on six opportunities. They are 7-5-1 all-time at the Memorial Cup.

In 2012, the Sea Dogs beat Shawinigan 4-1 in the final game of that year’s round-robin. However, the Cataractes got the final laugh as they beat Saint John 7-4 in the semi-final before they beat London in overtime to claim their first Memorial Cup.

Olivier Nadeau has two goals in the tournament and they’ve arguably been the two biggest for his team. He had the game-winner in Tuesday’s overtime win over Edmonton and then scored his second game-winner of the tournament Thursday against Hamilton.

The Buffalo Sabres prospect has three points in two games and has tallied 10 shots on goal.

The Speaker Series, presented by Deloitte, continues today with two separate talks. CHL President Dan MacKenize will speak to those in attendance at 1 p.m. while former Sea Dogs Boko Imama and Mathieu Joseph are joined by Bryant McBride at 2 p.m.

Bash on the Bay, presented by Canpotex, continues post-game with Matt Mays performing while the One For All district, presented by McCain Foods, begins with a Sea Dogs watch party at 5 p.m. Post-game, there’s live performances from Jamie Comeau and The Crooked Teeth.