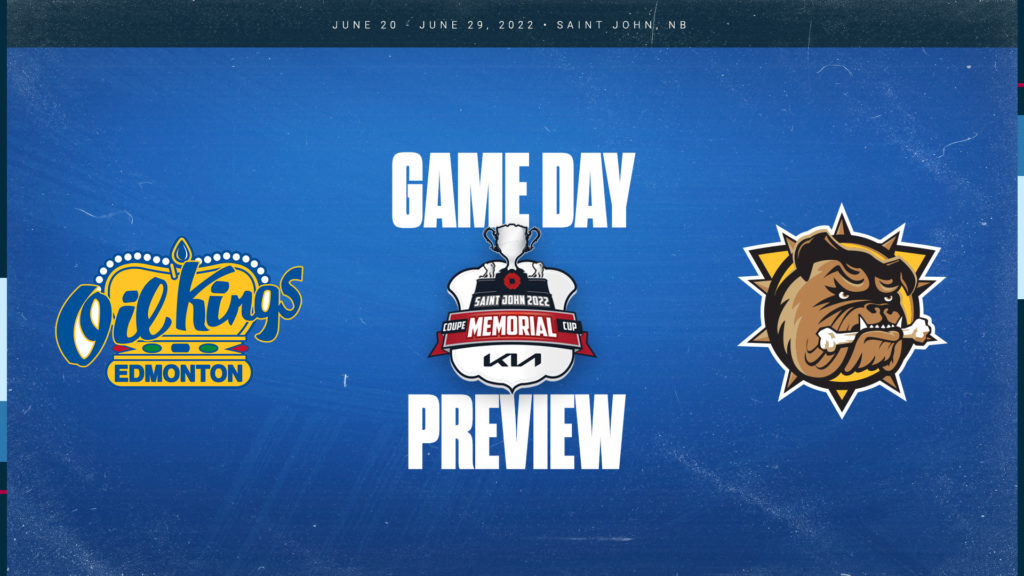 It’s a mammoth clash tonight at the 2022 Memorial Cup presented by Kia as the Edmonton Oil Kings and Hamilton Bulldogs battle to keep their tournament alive.

It’s do or die for both teams tonight.

The math is simple: Hamilton needs a regulation win to advance to Monday’s semi-final. An Edmonton regulation win sends them to the semis, as would an overtime loss or overtime win.

The Bulldogs are 0-2 in the tournament after a 5-3 defeat to Saint John on opening night that was followed by a 3-2 loss to Shawinigan Thursday.

Hamilton has the best power play in the tournament as they’ve converted on three of their six opportunities but their five goals are the fewest of the four competing teams. Furthermore, the eight goals the Bulldogs have conceded are the most thus far.

Edmonton beat Saint John 4-3 in overtime Wednesday as Jaxsen Wiebe’s third goal of the game gave the Oil Kings the two points. Despite the fact they have a win in their back pocket, the Oil Kings have to avoid a regulation loss otherwise their tournament will be over.

Their penalty kill has allowed just one goal on nine attempts, tied for the best through two games, while their 30 penalty minutes are the most in the 2022 Memorial Cup.

Courtesy of his hat-trick Wednesday, Wiebe leads the tournament in goals while teammate Luke Prokop’s three points lead all d-men in tournament scoring.

Tonight is the first ever meeting at a Memorial Cup between the two teams.

Mason McTavish scored his first goal of the tournament Thursday night as he opened the scoring against Shawinigan. The Anaheim Ducks prospect was held shotless in Monday’s opener but he rebounded Thursday with a power play goal and four shots. He’s won 51.2 per cent of his faceoffs through two games.

The third overall pick in 2021 had 16 goals in 19 postseason games in the OHL while his 29 points were the third most on the Bulldogs.

For the Oil Kings, Vegas Golden Knights prospect Jakub Demek leads the tournament in faceoff percentage with a staggering 70 per cent (35-of-50) success rate.

He has also tallied one assist in two games while his seven shots on goal are the second most by an Edmonton player.

International viewers can watch on CHLTV while fans in the U.S. can watch a full-game replay Saturday at 12 p.m. ET.

Area 506, presented by Envision Saint John, will be busy today with four live performances. Kill Chicago and Like a Motorcycle will hit the stage for 5 p.m. while Neon Dreams and Nicole Ariana perform at 7 p.m.