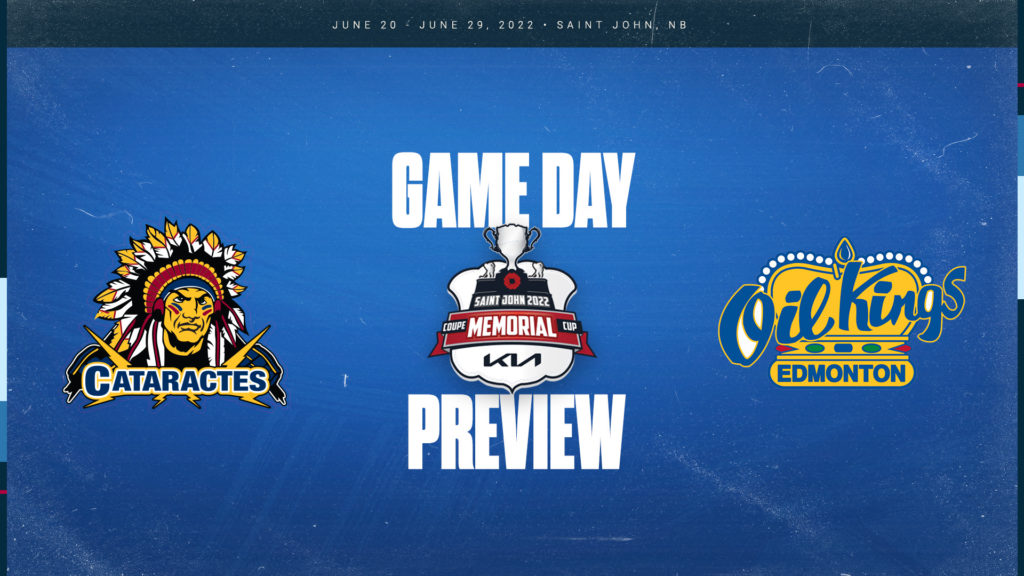 The Shawinigan Cataractes and Edmonton Oil Kings will make their tournament debuts tonight as they battle in the second game of the 2022 Memorial Cup presented by Kia.

Shawinigan enters the tournament after a historic season. After they finished the QMJHL regular season with the seventh best record, they swept Rouyn-Noranda and Gatineau before they took down Quebec, who had the best record in the QMJHL, in a decisive Game 5.

In the President Cup, the Cataractes defeated Charlottetown in five games to win the first QMJHL title in franchise history.

Edmonton enters the tournament on the heels of a third Ed Chynoweth Cup in the last decade after they defeated the Seattle Thunderbirds in six games in the WHL Championship but will be without star forward Dylan Guenther who miss the tournament with a knee injury.

The Oil Kings’ 104 points and 50 wins were both the second most in the WHL this season while their 973 penalty minutes led the league.

They concluded the regular season on a 23-2-1 streak before they swept Lethbridge and Red Deer in the first two rounds of the WHL Playoffs. They’d meet Winnipeg in the WHL Eastern Conference Finals and won in five games before they disposed of Seattle to reach the 2022 Memorial Cup presented by Kia.

The Cataractes were Memorial Cup champions in 2012 while Edmonton won the tournament in 2014.

Jakub Demek, a fourth round pick of the Vegas Golden Knights in 2021, had an impressive rookie campaign in the WHL. In 55 games, he recorded 20 goals and 54 points and then tallied 17 points in 19 postseason games to finish in a tie for third in Oil Kings WHL Playoffs scoring.

Xavier Bourgault’s 22 points were the fourth most in the QMJHL Playoffs while his 12 goals placed him in a tie for second place in the postseason. Five of his goals were game-winners, most in the league.

In the President Cup, the Edmonton Oilers prospect tallied nine points in five games to help the Cataractes claim their first title.

Ahead of tonight’s game, fans can head down to Area 506, presented by Port Saint John, for pre-game performances by Matt Anderson and Dave Sampson. Doors open at 3:30 p.m.

Additionally, the Speaker Series continues at Market Square Atrium as Fredericton native and NHL goaltender Jake Allen, alongside Taylor MacDougall, will speak to those in attendance.