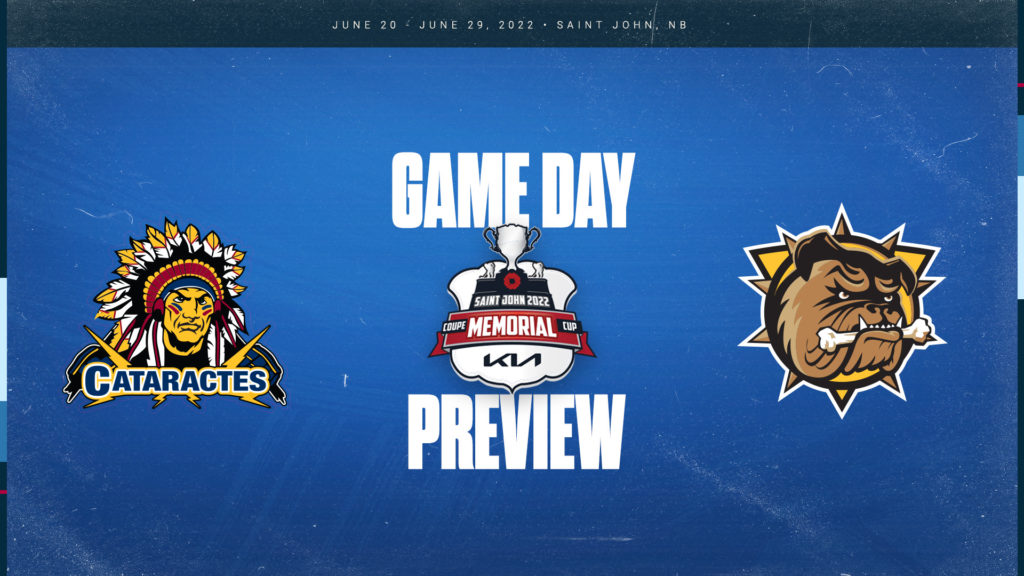 The President Cup champion Shawinigan Cataractes will look for their second win of the 2022 Memorial Cup presented by Kia when they battle the Hamilton Bulldogs tonight.

The Shawinigan Cataractes got off to the perfect start Tuesday night with a 4-3 win over the Edmonton Oil Kings as they begin their quest for a second Memorial Cup title.

Olivier Nadeau scored the game-winner in the third period while Xavier Bourgault had a goal and an assist. Captain Mavrik Bourque tallied two helpers in the victory, including the primary assist on the game-winning goal.

Shawinigan is 7-4-0 all-time at the Memorial Cup and dating back to their victory in 2012, enter tonight’s tilt on a three-game winning streak in the tournament.

Hamilton, who claimed their second OHL title earlier this month, were beaten 5-3 by Saint john Monday night in the tournament opener.

Ryan Winterton scored twice on the man advantage and despite a third period push, the Bulldogs lost its tournament opener for the second time in franchise history. In their lone other Memorial Cup appearance, Hamilton lost in the semi-finals to Regina and are 2-3-0 all-time.

It continued an incredible point-streak for the 19-year-old who concluded the regular season with points in four straight games before he recorded at least one point in all 19 Hamilton playoff games as he stormed to the Wayne Gretzky ‘99’ Award as OHL Playoffs MVP.

After a postseason in which he scored five game-winning goals, Bourgault, a first round pick by the Edmonton Oilers in 2021, continued his impressive postseason with a two-point effort Tuesday.

Bourgault led the Cataractes in goals during the regular season with 36 while his 75 points trailed only Nadeau. His 12 goals through the QMJHL Playoffs was a team high.

Tonight’s game can be seen LIVE on TSN 1 and 5 as well as RDS. Puck drop tonight is set for 7 p.m. AT / 6 p.m. ET / 3 p.m. PT from Harbour Station.
International viewers can watch on CHLTV while fans in the U.S. can tune in LIVE on NHL Network.

Today’s Bash on the Bay performer, presented by AIM Recylcing, is David Ayres as he will take the stage at 4 p.m. at Area 506.