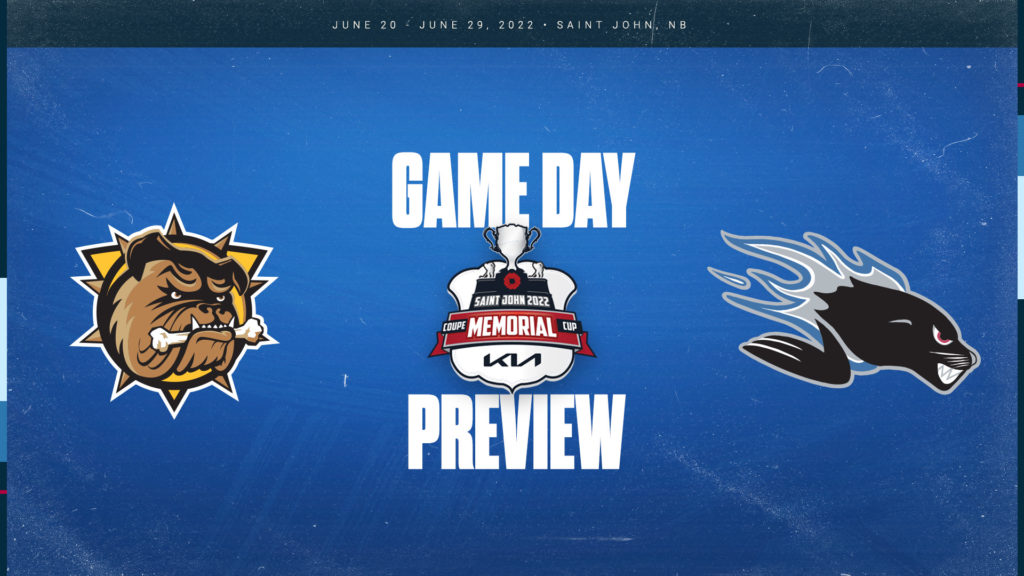 A champion will be crowned tonight.

The Hamilton Bulldogs will face the Saint John Sea Dogs this evening in the final of the 2022 Memorial Cup presented by Kia.

For the Bulldogs, it’s the final chapter in a string of high-profile situations they have found themselves in over recent weeks.

Hamilton defeated Windsor in Game 7 of the OHL Championship to book a spot at the Memorial Cup but quickly found themselves in a hole at the tournament.

They lost their tournament opener 5-3, to the Sea Dogs, and then dropped a 3-2 decision to the Cataractes. In a must win game, in regulation, the Bulldogs beat Edmonton 4-2 to advance to the semis where, with the pressure once again on, defeated Shawinigan 4-3 in overtime on Jan Mysak’s winner to book a spot in the Memorial Cup final for the first time in franchise history.

Logan Morrison, who is on an insane 27-game point streak that dates back to April 3, is, unsurprisingly, tied for the tournament lead with seven points (six assists). Mason McTavish and Ryan Winterton have each scored four goals in four games while Arber Xhekaj’s four points are the most by a defenceman in the tournament.

Despite a 2-2-0 record, Marco Costantini’s 2.91 GAA leads the competition, as does his .918 save percentage. He’s also seen 146 shots, 27 more than Shawinigan’s Antoine Coulombe.

In just their second Memorial Cup, tonight’s appearance, regardless of result, will be their best finish. They lost in the semi-final in 2018 to Regina.

As for the hosts, they’ve been inspired by interim coach Gardiner MacDougall.

A legend at the USPORTS level with the University of New Brunswick, MacDougall has guided the Sea Dogs to an automatic berth in the final after a 2-0-1 round-robin.

“It’s two great teams and it really should be a fine hockey game.”

After the aforementioned victory over Hamilton, Saint John collected a point in a thrilling 4-3 overtime loss to Edmonton in their second game.

Knowing a regulation win over Shawinigan in the tournament’s final round-robin game would guarantee them a spot in Wednesday’s final, they erased a 3-0 first period deficit to score five straight over the final 40 minutes to reach the second Memorial Cup final in team history.

William Dufour has been simply sensational for Saint John as his six goals, four of which came against the Cataractes, leads the tournament. Incredibly, the Sea Dogs own the top eight spots in +/- rating while Philippe Daoust’s five assists are tied for the second most in the tournament.

The Sea Dogs will look to lift the Memorial Cup for a second time in franchise history after a 3-1 win over Mississauga in 2011. This year is their fourth appearance at the tournament (2012 and 2017).

Ahead of tonight’s game, fans are encouraged to head to Area 506 for the final Bash on the Bay, presented by Envision Saint John, as Big Wreck will take the stage at 5 p.m.