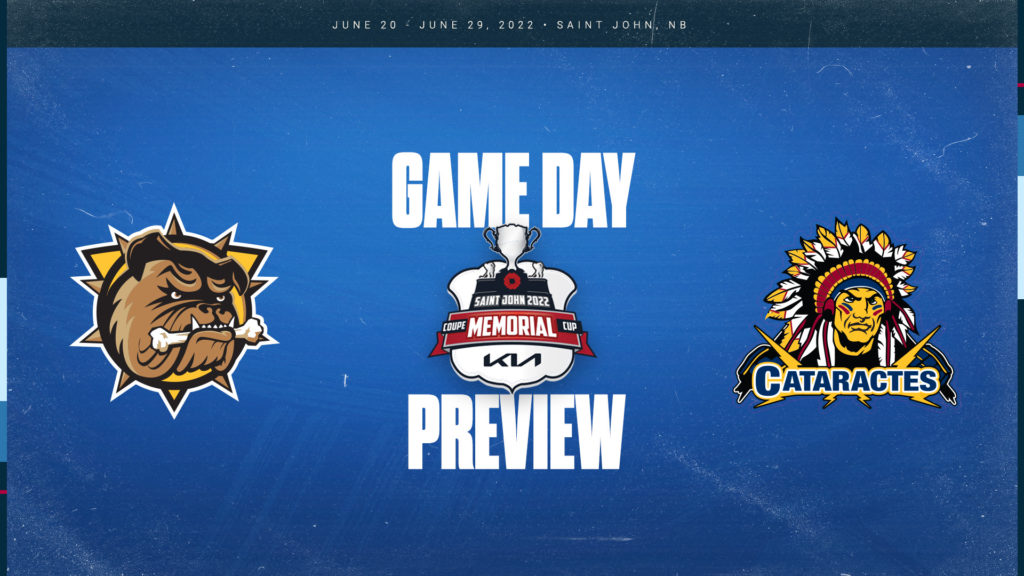 A spot in the final of the 2022 Memorial Cup presented by Kia is on the line tonight as the Hamilton Bulldogs and Shawinigan Cataractes meet in the semi-final.

The Bulldogs earned a spot in the semi-final with a winner take all victory Friday over Edmonton.

Hamilton won the game 4-2 behind a two-goal, three-point, effort from Mason McTavish as they advanced to the second Memorial Cup semi-final in franchise history. They’ll be hoping for a different result tonight as in 2018 the Bulldogs were beaten 4-2 by Regina.

With a 55.1 per cent success rate, Hamilton has the best power play in the tournament although they have conceded the only shorthanded goal of the competition. The Bulldogs penalty kill has operated at a 70 per cent clip thus far in Saint John.

The Bulldogs went 1-2-0 during the round-robin. After losses to Shawinigan and Saint John, they beat Edmonton in their final game to advance to the semi-final.

Shawinigan were well on their way to securing an automatic spot in the Memorial Cup final as they held a 3-0 lead on Saint John Saturday. However, the Sea Dogs responded with four goals in the second, and one more in the third, to secure a 5-3 win and force the Cataractes into a semi-final showdown.

The Cataractes converted 25 per cent of the time on the man advantage during the round-robin and own the best penalty kill in the tournament at 86.7 per cent.

They opened the tournament with a 4-3 win over the Oil Kings before they beat the Bulldogs 3-2 Thursday night.

Xavier Bourgault, Mavrik Bourque and Olivier Nadeau had goals for the Cataractes in their win over the Bulldogs Thursday night while McTavish and Avery Hayes scored for the OHL Champions.

Hayes’ three goals are tied for the second most in the Memorial Cup alongside four other players and fewer than only William Dufour’s six.

His two power play goals are tied for the most alongside teammate Ryan Winterton and Edmonton’s Jaxsen Wiebe while his 15 shots on goal are the third most.

Bourque’s lone goal of the tournament came against Hamilton but his five assists lead all players through the round-robin portion of the tournament. His 16 shots leads the Cataractes, and are tied for second overall, while his eight penalty minutes are the second most in the competition.

Alongside teammate Bourgault, Bourque is just one of four players who has averaged two points per game at the Memorial Cup.

With the Speaker Series and One For All activities concluded, it leaves just Bash on the Bay, presented by Envision Saint John, as the sole focus outside of the rink today.

Alan Doyle and Terra Spencer are set to hit the stage this afternoon with doors at Area 506 opening at 3:30 p.m.