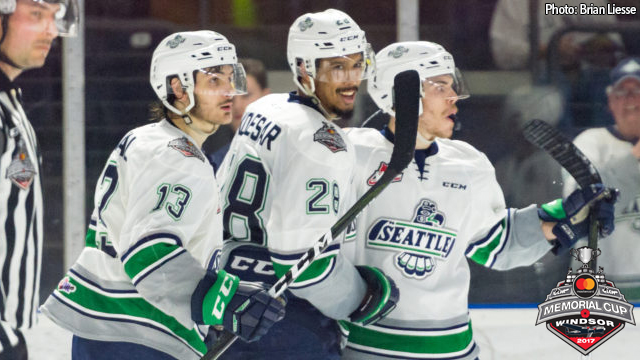 In the end, the Seattle Thunderbirds were a team with two Killer B’s who ended up winning the WHL Championship in part because of their killer D.

And a rookie goaltender.

The WHL champs’ two best players are forwards Mathew Barzal and defenceman Ethan Bear, both splendid offensive talents that have been every bit as good as expected, especially since they both had to overcome physical ailments during the post-season.

But it was the collective defensive play of Steve Konowalchuk’s team in overcoming the Regina Pats, the WHL’s best offensive team in more than two decades, that booked Seattle’s place in Windsor for the Mastercard Memorial Cup.

“We also try and play in their end as much as possible, a lot of similar stuff to what we try and do all year.”

It’s fair to say, Konowalchuk’s charges did everything effective. They lost just two playoff games until Game 2 of the WHL Final, before eventually skating off with the title.

Bear, the top defenceman in the WHL this year, injured his hand during the playoffs but has provided the type of high-end offensive flair from the back end that has defined his stellar major junior career. The 19-year-old draft pick of the Edmonton Oilers notched 70 points (28G, 52A) and picked up the pace in the playoffs.

Barzal, a first-round pick of the New York Islanders, produced at an astonishing offensive rate this season – 79 points (10G, 69A) in just 41 games, his absence from Seattle’s lineup in part due to playing for Canada at the World Junior Championship. Barzal, in his final season of major junior, produced near that pace in the post-season but, like Bear, also missed action (illness).

Covering for injury and World Junior absences was another impressive trait of the T-Birds – the team lost more than 300 man games in that regard but showed little ill effects.

Bear represents another interesting facet to the roster – a handful of Seattle players were Saskatchewan kids who returned to their home province to compete and eventually win the WHL crown off the Regina Pats.

One media report said “hundreds” of Bear’s family and friends attended the first two games in Regina. Hyperbole, perhaps, but Bear clearly appreciated the support and paid his supporters back by scoring in Game 1 of the WHL Final. His point shot also led to the overtime winner during that game and the series-clinching extra-time marker in Game 6.

For his part, Konowalchuk said it was a “nice bonus for some guys to play in an arena they watched” WHL action growing up.

Another recurring theme for Konowalchuk’s team is their return to the WHL Final after winning the Western Conference in 2016 before falling short in capturing the Ed Chynoweth Cup to the Brandon Wheat Kings in five games. The first three contests went to overtime, with Seattle ending up on the wrong end each time.

Konowalchuk acknowledged that winning the first overtime encounter against Regina on the road made a difference in his team’s psyche, to say nothing of the competitive advantage. The experience of returning to the championship series varied from player to player, according to the coach.

“It’s different for every guy. Some guys may feel a bit more relaxed,” he said. “It’s a bit more been-there-done-that type of thing with those guys. But (as a group) we are just trying to focus on right now and not think about last year.”

Seattle’s WHL crown marks the fifth time in the past nine years that the previous season’s losing finalist returned the following year to become league champions.

Barzal and Bear are the two big names but it’s not as though Seattle is bereft of stars beyond that pair. Keegan Kolesar (Columbus) and Ryan Gropp (New York Rangers) are two steely veterans who are NHL-drafted. With 84 points, Gropp led the T-Birds in scoring (35G, 49A), while Kolesar (26G, 34A) demonstrated a nose for the net too. Overage forward Scott Eansor is also a formidable presence, scoring near a point-a-game clip (38 points in 40 games).

“At this level, every little detail is magnified,” said Eansor, during the WHL Championship. “You have to pick your teammates up when bad things happen and (then) you have to capitalize when the other team makes mistakes.”

Depth forwards Nolan Volcan, Sami Moilanen, Donovan Neuls and Alexander True, who scored the Game 6 winner in Regina, are capable players who did yeoman’s work while teammates were out of the lineup. Beyond Bear, Turner Ottenbreit is an intriguing force at the back end. Tough, physical and able to chip-in offensively, the 19-year-old from Yorkton, Sask., is invaluable.

“He goes unnoticed playing against their top-9 doing all the little things,” said Konowalchuk. “He’s been like that all year.”

Seattle’s run to the Mastercard Memorial Cup is not surprising but the presence of Carl Stankowski playing goal for them can’t be called anything but a surprise. A major one, in fact. Having just turned 17 in March, he appeared in just seven regular season contests but has shut the door for Seattle in the playoffs. Included in his playoff heroics was stopping WHL MVP Sam Steel on a penalty shot.

“It’s been crazy, he looks a lot older than 17 and he plays like he’s much older,” said Gropp, who is three and half years older than his rookie teammate. “We feel comfortable with him back there, that he can make the big save.”

On a Seattle team that is now very comfortable in big-time situations.