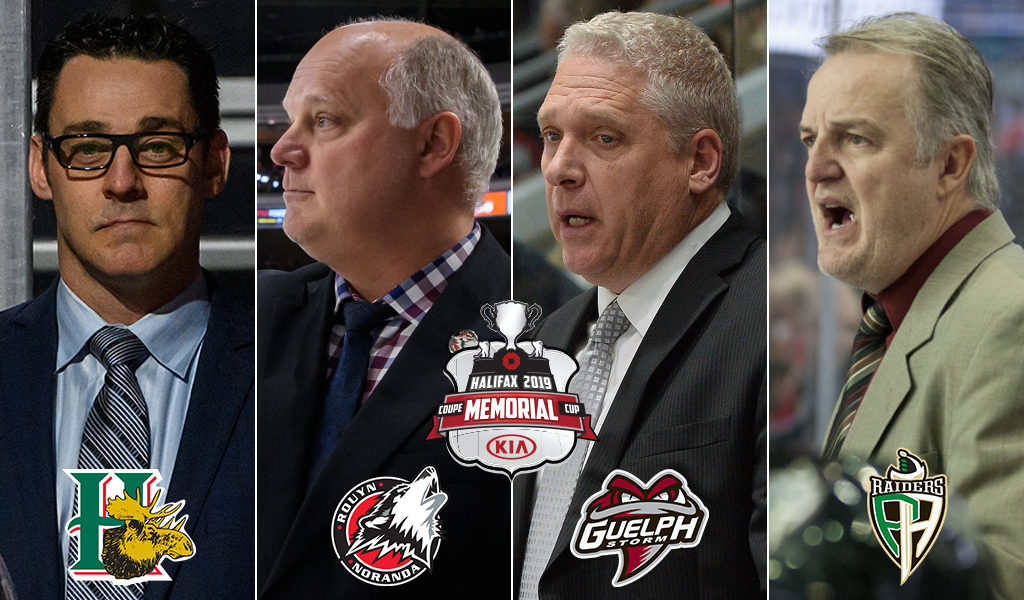 In the lead up to puck drop at the 2019 Memorial Cup presented by Kia, the bench bosses from the four participating squads spoke at a press conference Wednesday. Among the topics discussed was the strength of each club and what wisdom each coach plans to share with his team in preparation for the year-end tournament.

What are the biggest strengths and identities of your team?

Eric Veilleux, Halifax Mooseheads: When we skate, we usually give ourselves a chance to win. It allows us to create some scoring chances offensively and play well defensively. It’s probably the same way for every team, but for us it was a big difference when we stand still or when we skate. Those last two games, we just didn’t do it and we paid for it. We have six good defencemen who can move the puck well and skate well, and when we do, usually we give ourselves a chance to win.

Marc Habscheid, Prince Albert Raiders: I think I use the word ‘multi-dimensional’ a lot. When you get to this level, you have to be able to play different types of games because there are different styles on either team. We try to play that. I think the strength in our group is the group. We’re fortunate to have extremely good hockey players, but we have better people. They care about one another. They care about their teammates more than they do about themselves and I think their closeness is our strength.

Mario Pouliot, Rouyn-Noranda Huskies: I think our best strength is our team chemistry because when you look closely at our lineup, we have 20 players out of 23 drafted by our scouting department. All those kids grew up together. They developed together. They know what it represents to play with the Huskies. They have a lot of character. At this time of the season, you have to be really good on both sides of the puck. We have depth. We have good goaltending. We have depth on the back end and up front too. We are taking care of our defensive game. We want to make sure we will create time possession and we want to play fast too. I think that our best asset, and I have been saying this since the start of this season, is our team chemistry and the quality of the kids we have in our group.

George Burnett, Guelph Storm: Clearly, there is nobody at this tournament that doesn’t have a good group of kids and quality character. I think our ability to have the puck is very important, and our ability to move the puck and to be versatile to play different types of games depending on what’s required at that particular moment. Lots has been said about our resiliency. I think that has been shown in our leadership with some of the kids who have been with this program for a number of years and also with some of the kids who have come in and supported our leadership. (Nick) Suzuki was a captain, (MacKenzie) Entwistle was a captain. There is no question that our group had to come together quickly. There was a lot of familiarity even though the number of moves we had made, some of these kids had played together on the same team before at world junior tournaments or were childhood teammates. There are a number of different things to consider but they have come together quite nicely. I think the way they have battled back from some difficult circumstances here tells us a lot about our group and we’re excited to play.

What words of wisdom will you pass along to your players as they get ready for this event?

Veilleux: A season is long. In the playoffs, you have two games to adjust, maybe one. In the Memorial Cup, you need to be able to adjust in one game, so everything you do is in a shorter lapse of time. It’s one game at a time. I know in the playoffs we say the same thing but here it really is. You can’t start looking at what other teams do. You need to concentrate more on what you can do. That was my message for our players. It’s very simple.

Habscheid: For me, it’s three words: start on time.

Pouliot: We talk with our players, but at the end of the day, we have to focus on our team and use our strength and play our own game. I did that last year (with Acadie-Bathurst). Just focus on our team, using our strength, playing as hard as we can, and going one day at a time. You can look too far, so just stay in the moment and care for the thing you have control of and we’ll see what’s going to happen down the road.

Burnett: Start on time. I think that says a lot. There is no question that you can’t dip your toe in here and see how it’s going to go. It’s important for our kids to understand that everybody else who is playing in this tournament has the same feelings or thoughts that they do. There are kids who are going through this for the second or third time, but for the most part these kids are all feeling the same nerves and the same anxieties, so enjoy the run, play your best, and have no regrets when you’re done.