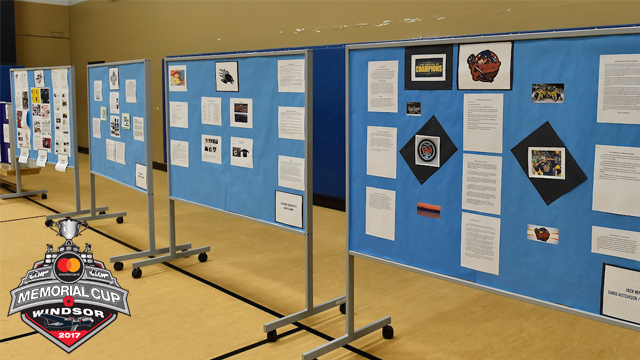 In preparation for the 2017 Mastercard Memorial Cup in Windsor, students from 89 classrooms in 41 schools involving all three local school boards participated in a mock draft of Canadian Hockey League teams.

Each class selected a city to follow from either the Ontario Hockey League, Western Hockey League or Quebec Major Junior Hockey League.  The students researched team history, geographic facts of the city, military history and subsequently created class projects.  They then followed their team from the time of the Draft in January through the regular season and playoffs.

The schools that drafted the 4 teams competing in the 2017 Mastercard Memorial Cup are:

Students from the lucky classes will enjoy a VIP experience at the 2017 Mastercard Memorial Cup as guests of the Host Organizing Committee.

All class projects are now on display as part of the CHL Education Expo located at the WFCU Centre.

Each class will also be on hand to participate in an interactive Fan Fun Day during the event.