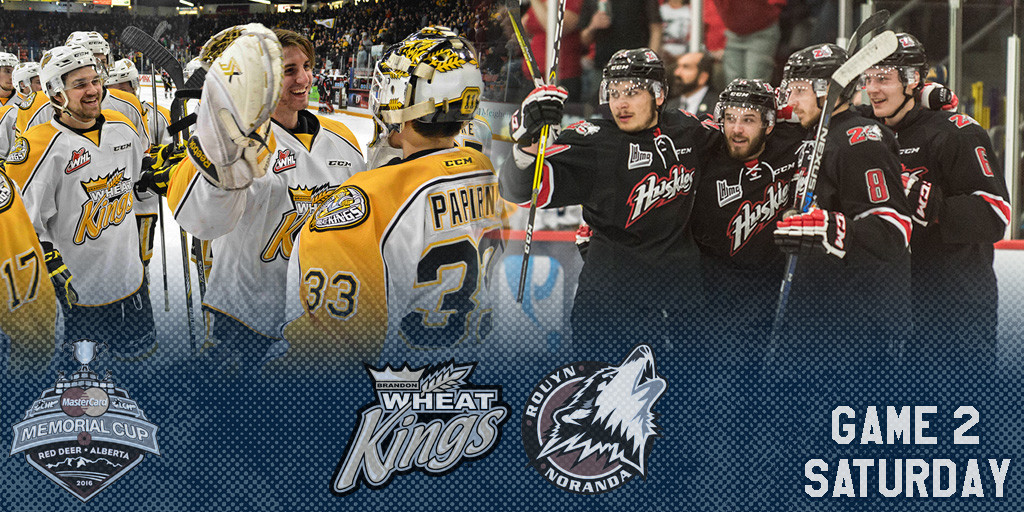 Two of the country’s high-powered offences lock horns on Saturday on Day 2 of the 2016 MasterCard Memorial Cup in Red Deer.

After the London Knights flexed their offensive muscle on Friday, the Brandon Wheat Kings and Rouyn-Noranda Huskies, both clubs that scored over 300 goals this season, look to follow suit.

Led by QMJHL regular season and playoff MVP Francis Perron, the Rouyn-Noranda Huskies enjoyed a renaissance season of sorts, claiming the second Jean Rougeau Trophy as regular season champions in the team’s 20-year history. The Huskies claimed their first President Cup title, earned points in 20 straight games over the first two months of the season and went on a 14-game home winning streak in January and February.

Other highlights included a Jacques Plante Memorial Trophy for goaltender Chase Marchand, an early season waiver claim who has emerged as the club’s starting goaltender after setting QMJHL playoff records with six shutouts and a 1.35 goals-against-average over 19 games.

“We’re a fast team with a lot of depth offensively and defensively,” said Perron, the team’s captain. “Our goaltenders have been solid for us and we’re a complete team. We have three lines that can all score. Defensively we have an incredible top four.”

That defensive top-four only gets stronger tonight as Boston Bruins second round pick Jérémy Lauzon returns to the lineup for the first time since April 15th when he suffered a scary neck laceration in a game against the Blainville-Boisbriand Armada.

“I was very lucky with my injury and I am happy to be back to help my team,” said Lauzon, an 18-year-old native of Val-d’Or, Quebec. “I know guys like Bruno-Carl Denis really stepped up while I was out, so it’s good to be back in the lineup for the Memorial Cup.”

Lauzon who attended Canada’s National Junior Team Selection Camp this past December, recorded over a point-per-game from the back end with 10 goals, 40 assists and 50 points in 46 games. He anchors an accomplished blueline that also features QMJHL first team all-star Philippe Myers, veteran power play catalyst Nikolas Brouillard and QMJHL defensive defenceman of the year Allan Caron.

Though they suffered just nine regulation losses all season, the Huskies will have their work cut out for them against the WHL champion Brandon Wheat Kings in Red Deer tonight.

Brandon’s 319 goals tied them for the CHL lead with London as a deep cast of offensive contributors, including key members of their blueline, can be counted upon by veteran GM/Coach Kelly McCrimmon.

His team is taking the 2016 MasterCard Memorial Cup one game at a time.

“In a playoff series you’ll have a little bit more of a war of attrition where you can make adjustments and the playoffs are a real marathon. This though, is a sprint and you have to come to play every game.”

Brandon’s blueline led by Philadelphia Flyers first round pick and WHL Defenceman of the Year Ivan Provorov combined for 17 goals over 21 playoff contests.

Brandon was one of two WHL teams this season to have seven players score 20 or more goals and one of two in the league to have four 30-goal scorers.

“We’ve got the team here to do it, but there’s not a lot of room for error,” said Quenneville, a first round pick of the New Jersey Devils. “It’s a Game 7 mentality every night from here on out. This is a huge opportunity and we need to be at our best.”

Expect a Game 7 atmosphere at ENMAX Centrium in Red Deer tonight as the QMJHL and WHL champions go head-to-head on Sportsnet and TVA Sports 2 at 5:00pm MT.