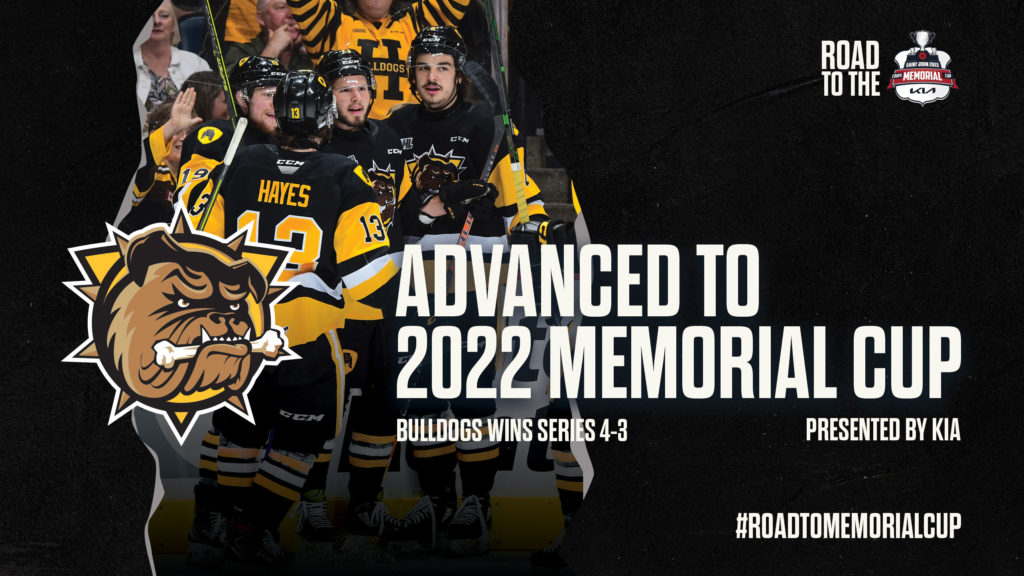 The Hamilton Bulldogs have punched their ticket to the 2022 Memorial Cup presented by Kia after they claimed the J. Ross Robertson Cup after a 4-3 series win over the Windsor Spitfires.

The Bulldogs won Game 7 on home ice Wednesday night as they secured their second OHL Championship in franchise history after a 6-1 win. Hamilton also claimed the 2017-18 title.

It will mark their second appearance at a Memorial Cup after they finished third four years ago.

After a simply astonishing playoff performance, Logan Morrison claimed the Wayne Gretzky ‘99’ Award as OHL Playoffs MVP. The 19-year-old registered 17 goals and 39 points in 19 postseason games and tallied at least one point in every playoff contest. Hayes recorded 34 points (14 goals) in the OHL Playoffs while McTavish scored 16 times and added 29 points in Hamilton’s run to the J. Ross Robertson Cup.

After a record-breaking regular season, where they won 51 games and tallied 107 points, the Bulldogs cruised through the first three rounds of the OHL Playoffs after four-game sweeps of Peterborough, Mississauga and North Bay.

However, they opened the OHL Championship with a 4-3 overtime loss to the Spitfires, a defeat that snapped a 22-game winning streak that dated back to the regular season. Hayes scored twice in Game 2 as Hamilton won 5-4 but Windsor took re-took the series lead as Wyatt Johnston had two goals in a 6-3 victory in Game 3.

Gavin White levelled the series at 2-2 as he scored the overtime winner in a 3-2 Game 4 win before McTavish scored twice Sunday in a 3-2 Bulldogs victory. The Spits forced a Game 7 after a 5-2 win Monday night thanks to a pair of goals from Daniel D’Amico before the Bulldogs won the decider this evening.

No player on the Bulldogs has previously played in a Memorial Cup. Hamilton will look to become the first OHL team to win the Memorial Cup since Windsor in 2017.

In the opening game of the tournament, the Bulldogs will face the Sea Dogs on June 20. They will then play Shawinigan June 23 before they conclude their round-robin schedule on June 24 against either Edmonton.

Every game of the 2022 Memorial Cup presented by Kia can be seen live on TSN and RDS. A limited number of tickets for the tournament remain available for purchase.