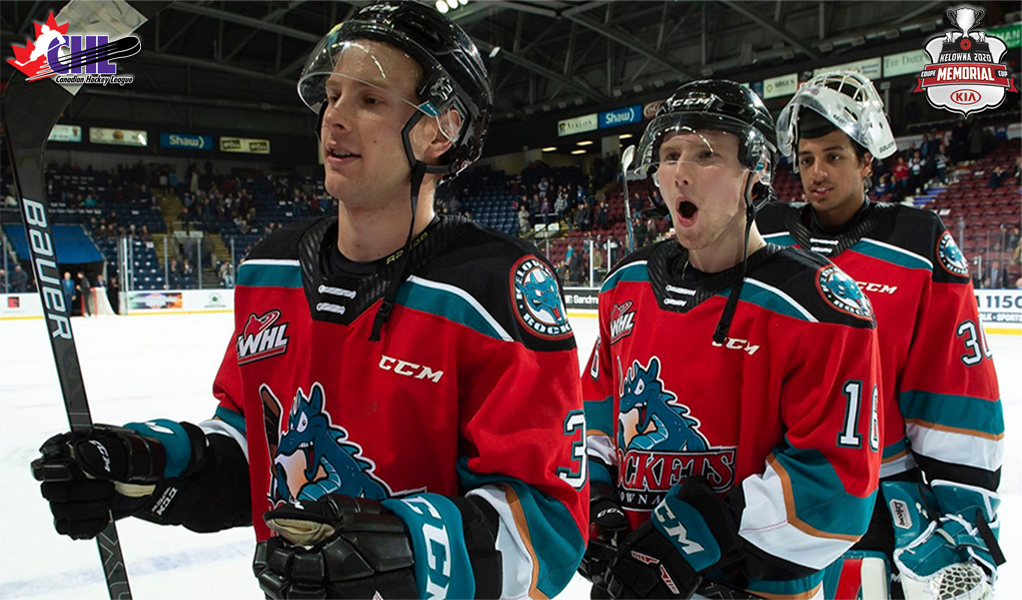 The Kelowna Rockets have a chance to win it all.

As hosts of the 2020 Memorial Cup Presented by Kia, the Rockets will be one of four clubs from across the circuit vying for CHL supremacy when the puck drops for the national championship next May.

A month into the new season, the Rockets have had a successful start to 2019-20, coming away with six victories in 11 contests to hold down third place in the WHL’s competitive B.C. Division. It is the early goings of a season in which the club looks to not only qualify for the postseason for the 12th time in the past 13 years, but also one in which it hopes to punctuate with its second-ever CHL crown.

Leading the way for the Rockets is newly minted captain Nolan Foote, a 2019 first-round selection by the Tampa Bay Lightning who through late October tops the charts for Kelowna with 13 points counting six goals and seven assists across 10 contests. The son of Rockets head coach and legendary NHL blue-liner Adam Foote, the younger is a natural leader both on and off the ice and brings a determined presence to the locker room, making him a perfect choice to sport the ‘C’.

“When you’re picking a captain, you need someone who is going to be a proven leader and, in my mind, Nolan will be a great leader for the Rockets this season,” said Rockets president and general manager Bruce Hamilton. “He’s been our best player most nights this season so far, and I believe that your captain has to be your best player most nights.”

Foote has spent all four seasons of his junior career with the Rockets and the chance to lead the squad and follow in the footsteps of brother Cal who wore the captaincy during the 2017-18 campaign makes the opportunity even more special.

“It means a lot. Obviously the Kelowna Rockets are such a great organization, one of the best in the CHL. I’m very honoured to wear it,” Foote said. “It’s a huge year hosting the Memorial Cup, and I want to lead this team to a championship.”

After competing for a spot with the Lightning this fall – a chance for Foote to skate alongside brother Cal, a fellow Tampa Bay prospect – the budding scorer returned to the Rockets on a mission to guide his club to the winner’s circle. That much has been evident through his early season performance, including a two-assist debut against the rival Kamloops Blazers that was shortly followed by a four-point outing counting one goal and a trio of assists in a 6-1 win over the Tri-City Americans that earned Foote second-star recognition.

The Rockets have named @foote_nolan the 25th captain in franchise history.

While Foote will be tasked with leading his team, he will receive valuable support from a group of talented veterans that includes left-wing Dillon Hamaliuk, a San Jose Sharks prospect who joined the team this offseason after spending the past three years with the Seattle Thunderbirds. Finishing 2018-19 with 26 points across 31 appearances, the Leduc, Alta., native provides key secondary scoring to the Rockets, in addition to winning pedigree after being part of the Thunderbirds squad that captured the Ed Chynoweth Cup in 2017.

Another key veteran for the club includes third-year defenceman and Vegas Golden Knights draft pick Kaedan Korczak, who brings a hulking presence to the blue line in addition to an offensive game that continues to blossom. After wrapping up last season with 33 points counting four goals and 29 assists across 68 appearances, the product of Yorkton, Sask., has taken another stride this year as he has tallied two goals and six assists in his first 11 contests.

While a veteran group leads the charge for the Rockets, the club also benefits from some new faces, including freshman forward Pavel Novak, the 13th overall selection in the 2019 CHL Import Draft. Skating in his first season in North America, the Czech Republic native has needed little time to adjust to his new surroundings as he has already notched five goals and eight assists in 11 games to sit tied with Foote for the team lead in scoring.

Meanwhile, any club with championship aspirations must have strong support in the blue paint, and the Rockets have that in spades in 18-year-old netminder Roman Basran, who in his second season holding down the No. 1 duties has had a strong start in coming away with five wins in nine appearances in addition to a .929 save percentage that ranks fourth among WHL goaltenders who have suited up in as many games.

With talented scoring forwards, a burgeoning blue line, and solid play between the pipes, the Rockets have put together an impressive team that is a viable contender to bring the Memorial Cup back to the Okanagan Valley for the first time since 2004.