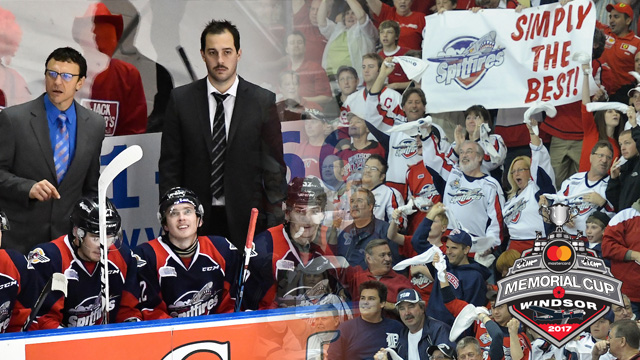 It’s been a long time coming, 36 years to be exact, but the Mastercard Memorial Cup is coming back to Windsor for the first time since 1981, a tournament that didn’t even feature the host Spitfires competing.

The Spits have enjoyed their share of success in the years since, becoming one of five teams to ever repeat as Champions. A team built around a trio of present-day NHLers in Taylor Hall (New Jersey Devils), Adam Henrique (New Jersey Devils) and Ryan Ellis (Nashville Predators) hoisted the Memorial Cup in 2009 in Rimouski before doing so again a year later in Brandon.

With a talented roster constructed by 2009 and ’10 mastermind GM Warren Rychel, the Spitfires are engaged in a first round battle with the rival London Knights, a series that has drawn a large audience with Games 1 and 2 broadcast across the country on Sportsnet 360.

Providing a competitive product on the ice isn’t the only responsibility undertaken by a Mastercard Memorial Cup host though, a fact Steve Horne can attest to.

Event Manager of the 2017 Mastercard Memorial Cup Host Committee led by Chairman John Savage, Horne has been with the Spitfires since June of 1990 and serves as the club’s Director of Business Development. His lengthy tenure in Windsor has amplified his excitement level about the opportunity set before the organization in the months to come.

“No question, everyone around here is very excited,” he said. “Each day brings with it new tasks and responsibilities to ensure that we’re putting together an experience that the people of Windsor can really take pride in.”

Mastercard Memorial Cup anticipation is at a fever pitch across the city as the Spits have fostered an environment that is getting everyone from the youngest minor hockey player to the oldest season ticket holder involved in the push for CHL supremacy.

“Our whole intention from day one was to work with the Canadian Hockey League to build the brand in our region with the local fans,” Horne noted. “Being involved with every type of age level and organization in the community has given us the chance to share about the Memorial Cup’s rich military history as well as the extensive background of the Canadian Hockey League and its role in the game we all love.”

One doesn’t need to go far in Windsor to find evidence of the fast approaching event.

Each of the nearly 3000 players enlisted in Windsor Minor Hockey this season wears the Mastercard Memorial Cup logo on their sweater and the Spitfires have also held a CHL City Expo Draft, a project that assigns each area elementary school one of the CHL’s 60 member teams. The students will learn about their respective team and produce school projects that will be on display for all to see at the 2017 Mastercard Memorial Cup.

Additionally, the Host Committee has spearheaded a 60 Days, 60 Facts countdown on the event’s Facebook and Twitter platforms that is educating fans on the extensive history of the Mastercard Memorial Cup.

For Horne, who has 28 years of Spitfires memories from the high-scoring era of Bill Bowler to the unforgettable back-to-back title runs in 2009 and 2010, hosting the Mastercard Memorial Cup is about much more than just what happens on the ice.

“There’s something here for everyone,” he added. “We want all of the people from here in Windsor and hockey fans coming in from abroad to thoroughly enjoy themselves from the moment the Cup arrives on May 18th to when we see it raised up on May 28th.

“We’re looking forward to revealing some of the exciting things that we’ll have in store for fans around the WFCU Centre, Horne concluded. “We’ll have some of those announcements in the coming weeks.”

Ticket packages for the 2017 Mastercard Memorial Cup are now on sale. Visit mastercardmemorialcup.ca/mmctickets for full details.