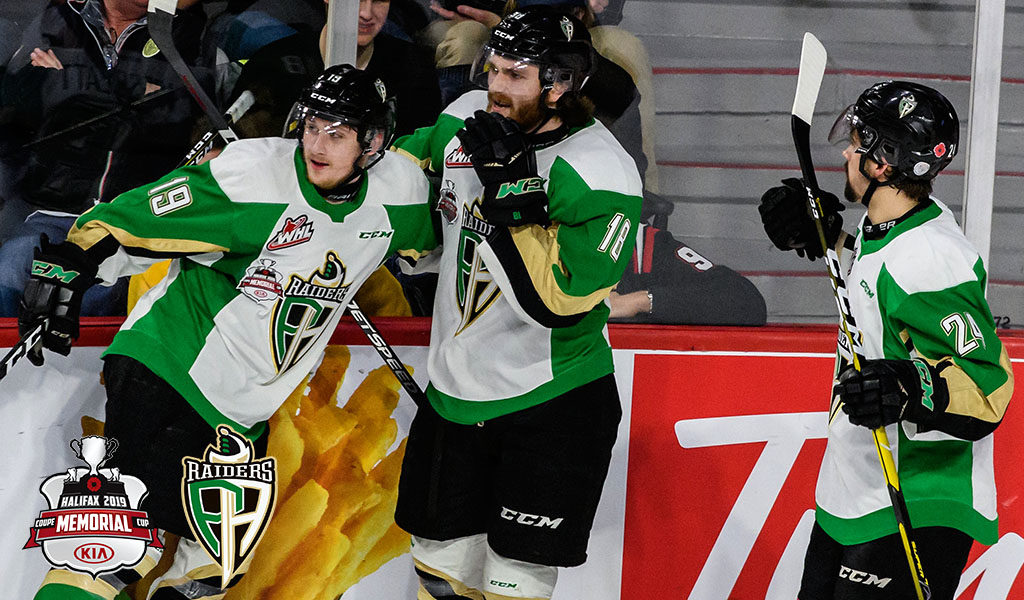 Just two years ago, that was the total number of wins the Prince Albert Raiders mustered up as the Central Saskatchewan club finished two spots removed from the Western Hockey League’s basement and outside of the playoff picture for the second time in three seasons.

Fast forward to 2018-19 and the Raiders pieced together a 54-win campaign, the second-most victories in franchise history, including a 19-game win streak that stretched into early December to give Prince Albert 26 wins through 28 games, topping its total from two years earlier in less than three months.

On Tuesday night, Raiders head coach Marc Habscheid, who despite his club falling in round robin action at the 2019 Memorial Cup presented by Kia, reflected on the franchise’s progress and the successful season that was.

“It’s okay to be a Raider again,” Habscheid said. “We’re proud of the guys, the franchise, the city. Nobody picked us to be here at the beginning of the year. (We were) just a bunch of guys that got laughed at three or four years ago, we got sand kicked in our face, and our franchise and our players were made fun of. We just stuck together.”

While the season brought many highs on the ice, it wasn’t without its adversity. In March, the team lost longtime executive Donn Clark following a battle with cancer, nearly a year after the tragic Humboldt Broncos bus crash that killed 16 people, including Raiders draft pick Adam Herold who had laced up for the club four times over the previous two seasons. Habscheid was also dealing with the loss of his father and received continuous support from his high character squad.

“They’re a special group. They’re just like my adopted kids,” Habscheid said. “When we won that Game 7 (against Vancouver) in overtime, then it really came to fruition what it was all about, the camaraderie, and that bond is something they’ll have for the rest of their lives. Nobody had better look down on these guys because they are a hell of a group.

“They are tremendous players who are great people. They had a lot to do with helping out our franchise. You can market all you want, but winning is the best marketing and they did that for us.”

What a season it was!

Thanks to all of our fans for being with us every step of the way!#GoRaidersGo

Along the way, a handful of players who worked through that growing pains season with the Raiders, including forwards Parker Kelly and Sean Montgomery, as well as captain Brayden Pachal, lived to see the fruits of their labour this season as the Raiders were one of the top teams in the circuit all year as the club ranked in the Top 10 in the Canadian Hockey League for all but two of 26 weeks, including a 15-week stretch where the club maintained the top spot.

By season’s end, the Raiders sat first place with a 54-10-2-2 showing, winning their first division title in 20 years, and well positioned to claim the Ed Chynoweth Cup as the WHL playoff champion and potentially make a run at the franchise’s second-ever Memorial Cup, and first since 1985.

After sweeping through the opening round of the postseason, the Raiders then faced off against the provincial rival Saskatoon Blades, coming out on the winning side of a hard-battled six games series to advance to an Eastern Conference Final date versus the Edmonton Oil Kings. Another six-game series saw the Raiders prevail, setting up an opportunity for the club to not only capture the league title for the first time in 34 years, but also marking its first trip to the finals since that initial win.

Carrying a 3-1 series advantage through four games versus the Western Conference winning Vancouver Giants, it appeared a championship would soon be in the Raiders’ grasp, but it didn’t come easy as the Giants pushed the Raiders to overtime in Game 7 before centre Dante Hannoun capped the victory to bring the Ed Chynoweth Cup to Prince Albert for the first time in more than three decades and punch the club’s ticket to Halifax to compete in the 2019 Memorial Cup presented by Kia.

Ultimately, the Raiders couldn’t translate that same success to the year-end tournament as the team fell in round robin action. And while the year didn’t end on a high note, there is still much to celebrate for the WHL champions.

The winner of the Del Wilson Memorial Trophy as WHL Goaltender of the Year is @MapleLeafs prospect @IceScott99 of the @PARaidersHockey! #WHLAwards pic.twitter.com/9NBgBMO4hP

On the ice, the club saw the emergence of 20-year-old right-wing Brett Leason, who after finishing the 2017-18 campaign with a modest 32 points exploded to an 89-point finish this season, earning him a place on Team Canada’s roster at the 2019 IIHF World Junior Hockey Championship and drawing the attention of talent evaluators after he was passed up by NHL clubs in the past two summers. The Calgary native now projects as an early selection at the 2019 NHL Draft.

Meanwhile, netminder and Toronto Maple Leafs draft pick Ian Scott also impressed, winning 38 of his 49 appearances, while finishing second league-wide in both goals-against average (1.83) and save percentage (.932). Along the way, Scott picked up a WHL-leading eight shutouts, then added another five perfect games in the postseason. It all added up to Scott being named this year’s winner of the Del Wilson Trophy, presented to the WHL’s Goaltender of the Year.

But beyond the on-ice success, the most memorable accomplishment of 2018-19 was helping Prince Albert rediscover its passion for the Raiders. Just a handful of seasons removed from being viewed as an also-ran, a formidable team found success on the ice and brought the pride of junior hockey back to the small town community.

“I’m super proud to play with all the guys,” said Pachal. “A WHL championship is a huge accomplishment, and we put a small market team like Prince Albert back on the map again where it belongs.”

“It sucks that we couldn’t get the Holy Grail but we got one out of the two,” Kelly said. “I’ll remember all of us lifting a trophy above our heads. It’s kind of tough to look at the positive side as we missed our mission but I’ll be looking back at this when I’m older and telling my kids about it. It’ll be a good story to tell.

“I go back to when me, ‘Monts’, and ‘Scotty’ were young guys and the odds were always against us. Then to be here and to put Prince Albert back on the map, and to see all that we accomplished throughout the year, I am so proud of the guys. We’ve overcome so much adversity. It’s a tight room. It’s something we’ll share forever. Every one of those guys in the room are my brothers. I love them. We’re champions.”