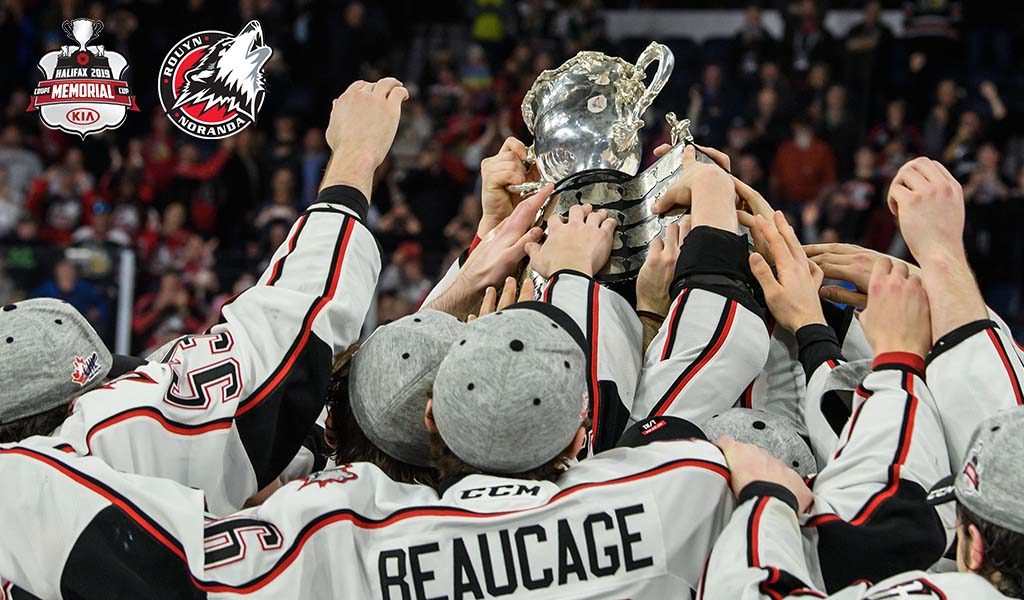 Talk about an unforgettable season.

For the first time in franchise history, the QMJHL’s Rouyn-Noranda Huskies were crowned the CHL champions after the club topped the rival Halifax Mooseheads in the final round of the 2019 Memorial Cup presented by Kia.

Leading the way was defenceman Noah Dobson, a keen acquisition by first-year general manager and head coach Mario Pouliot, as the budding blue-liner proved to be a steady presence, particularly in the final two games of the year-end tournament when he averaged more than 37 minutes of ice time per night and was tasked with shutting down the opposition.

“Without (Dobson), I wasn’t sure if we would be here today,” Pouliot said following the victory. “We knew at that time that we needed depth in the back end and the best ‘D’, and for me, Noah Dobson is the best player in the ‘Q’.”

Hoisting the Memorial Cup is familiar territory for Dobson, who won it all last season with the Acadie-Bathurst Titan – also under the guidance of Pouliot – before joining the Huskies for a chance at consecutive titles.

“It’s unbelievable. The feeling doesn’t get old,” Dobson said after Sunday’s big win. “I knew from Day 1 when we got here, this was a special group. I am so proud of all the guys. We were down 2-0 and we showed character by coming all the way back and scoring four unanswered.”

In all, it marks the latest accomplishment for Dobson, who just weeks after winning with the Titan last spring was selected in the first round of the 2018 NHL Draft by the New York Islanders. He later joined Team Canada as part of the 2019 IIHF World Junior Hockey Championship and, only days upon his return, was recruited to help guide the Huskies to the winner’s circle.

The Summerside, P.E.I., native proved to be an instant hit, closing out the regular season with his new club above a point-per-game pace, then following that up with eight goals and 21 assists in only 20 postseason contests as he claimed the Guy Lafleur Trophy as the QMJHL playoff MVP as the Huskies hoisted the President’s Cup for the second time in four seasons.

THE ROUYN-NORANDA HUSKIES ARE YOUR MEMORIAL CUP CHAMPS! pic.twitter.com/X4Rhm0Dr0X

“Winning is the best part of hockey. This is why you play the game,” Dobson said. “These are going to be friendships for the rest of your life. The team chemistry is second-to-none. We’re in a small ville. We go to the rink and hang out with the guys. These are our brothers and that’s what makes this special – how close-knit of a group we are.”

In punching their ticket to the 2019 Memorial Cup presented by Kia, the Huskies wrapped up the 2018-19 campaign with a 59-8-0-1 showing to set a QMJHL record for single-season wins, while also tying a CHL-wide high-water mark with 25 consecutive victories, a mark originally set by the Sorel Éperviers in 1974. Along the way, the Huskies ranked in the CHL’s Top 10 a total of 23 times in the 26-week regular season, including the final seven weeks in which the club held the top spot.

After outdueling the Shawinigan Cataractes in a six-game opening-round set, the Huskies then put together back-to-back sweeps of the Victoriaville Tigres and Rimouski Oceanic to earn their spot in the President’s Cup Final. There, the squad matched up with the Eastern Conference champion Mooseheads in what ultimately ended in six games as the Huskies captured their second league championship in four years.

That win presented a second chance for a handful of Huskies to reach the CHL pinnacle, namely 2019 Jean Beliveau Trophy winner Peter Abbandonato, who led the QMJHL with a staggering 111 points, as well as 21-year-old starting netminder Samuel Harvey, who were a part of the Huskies squad that lost in overtime in the Memorial Cup Final in 2016.

As expected, both played key roles in this year’s deciding victory, as Harvey came away with 23 saves, while Abbandonato netted the eventual game winner in the early stages of the final frame, helping to end their careers on a high note as they raised junior hockey’s Holy Grail.

“It doesn’t get better than this. Last year in the ‘Q’, last game tonight, and I end it a champion. I have no words to describe it,” Abbandonato said. “(Losing in 2016) hits me every day. I know how it feels, so to finally win it, what a relief.

“I am so happy for all of these guys. We made such a great bond with every player on this team. The chemistry is incredible. Knowing these guys, growing with them year after year, and finally winning the Memorial Cup is just an incredible feeling.”

“We talked about (losing in 2016) in the second intermission. There was no way we were going to lose this game,” Harvey said. “We worked so hard for it and now we are going to enjoy it.”

In meeting the Mooseheads in the final, it marked the first time since 2006 where two QMJHL opponents faced off for CHL supremacy, a fitting matchup as the league concluded its 50th season. The hosting Mooseheads put up an incredible fight but could not withstand the Huskies’ relentless pressure as Rouyn-Noranda potted four unanswered to come away with the victory.

Among the goal scorers was Montreal Canadiens signee Joel Teasdale, who wrapped up the tournament at a point-per-game pace, counting four goals and one assist, as he was presented with the Stafford Smythe Memorial Trophy as Memorial Cup MVP.

“I bring my work every game. I do the simple play and I play hard, and that’s exactly the philosophy here in Rouyn-Noranda – a work ethic team. That’s exactly what I am,” Teasdale said. “It’s fun. The depth in this team is awesome. Every player can bring a little something and everybody did it in the tournament, so it’s really nice to see.”

But Teasdale wasn’t the only member of the Huskies to take home a trophy. There was also left-wing and Boston Bruins prospect Jakub Lauko, who claimed the Ed Chynoweth Trophy after leading the tournament in scoring with eight points, counting two goals and six assists, while both Dobson and centre Felix Bibeau, who finished with five goals and one assist, were named to the year-end all-star team.

The Huskies’ celebration now continues as they take the championship trophy back home to Rouyn-Noranda for the first time in club history, marking the occasion with their countless supporters, many of whom made the trip to Halifax and packed the stands for the Championship Final.

“It means a lot (to the city) and we are so happy. They are the best fans in the league,” Pouliot said. “They were always helping us, pushing harder when the game is tough, like today when we were trailing 2-0, but we found the energy and the character to bounce back. They were there for us and we are so happy for all the fans.”