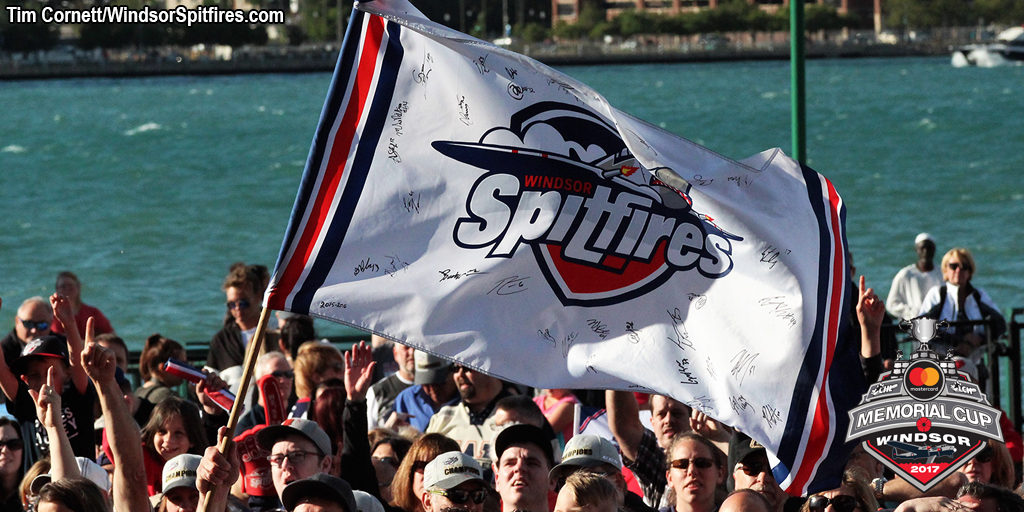 The Windsor Spitfires hoisted the Memorial Cup for the third time in franchise history on Sunday, capping off a wild two weeks in The City of Roses as the 99th Mastercard Memorial Cup drew to a close and the hometown fans went home happy.

It goes without saying that the event was wildly successful for the hometown Spitfires, but not just on the ice.

Yes, the Spits overcame the odds, becoming the 10th host team to claim CHL supremacy with a perfect 4-0 record in the tournament, but the organization accomplished a lot off the ice too.

The event also featured several legacies including the dedication of a special Remembrance Garden outside the WFCU Centre, while helping bring rooms to life at the Windsor-Essex Children’s Aid Society in partnership with the SmileZone Foundation.

“The primary reason for being here is hockey,” said Host Organizing Committee Chairman John Savage,” but our desire was to pull the whole community into this.

“One of the primary focuses outside of the hockey was to showcase Windsor, to have the community engaged in all of the activities around here. I think our team of volunteers and great staff did a tremendous job pulling all of that together.”

Spitfires president Bob Boughner is now a three-time Mastercard Memorial Cup champion with the organization. After coaching the Spits to titles in Rimouski in 2009 and Brandon in 2010, hosting the event and hoisting the trophy on home ice took the excitement to another level.

“To host this at home is a dream come true for our team and our city,” he said. “It’s an amazing point in time for our program because we’ve always dreamt of bringing this to the city and to get to raise the trophy at home is really the pinnacle for us.”

Now an assistant coach with the San Jose Sharks, Boughner had his finger on the pulse in Windsor throughout the 2016-17 season in the lead-up to the festivities. Hosting the Mastercard Memorial Cup has provided a new perspective on the event as a whole.

“In hosting it you really get to see how big this event really is,” he noted. “Everything from the the arrival of the Memorial Cup to our numerous community initiatives, Fan Fest, inviting back former Spits for an Alumni Game, to everything that happens on the ice requires so much planning and preparation. There’s so many things that go on and it’s a huge undertaking.

“I’m proud of how we’ve done it, with our fans, volunteers and employees.”

Savage was quick to extend thanks to Event Manager Steve Horne, Operations Manager Borden Yewchyn and Military Coordinator Mike Akpata for their contributions in the planning and execution of the 99th Mastercard Memorial Cup.

“Steve really quarterbacked the whole thing and did a great job organizing and staying on top of what, at times, can be an overwhelming task. We have 25 committee members who all contributed and when you’re trying to coordinate more than just the hockey aspects there are little nuances that arise along the way. I’m very proud of our team and what we’ve accomplished.”

Following a Championship Parade and Celebration Rally, the 99th edition of the event in Windsor is officially in the books, but planning is well underway for the centennial celebration that gets underway on May 17, 2018 in Regina, Saskatchewan.