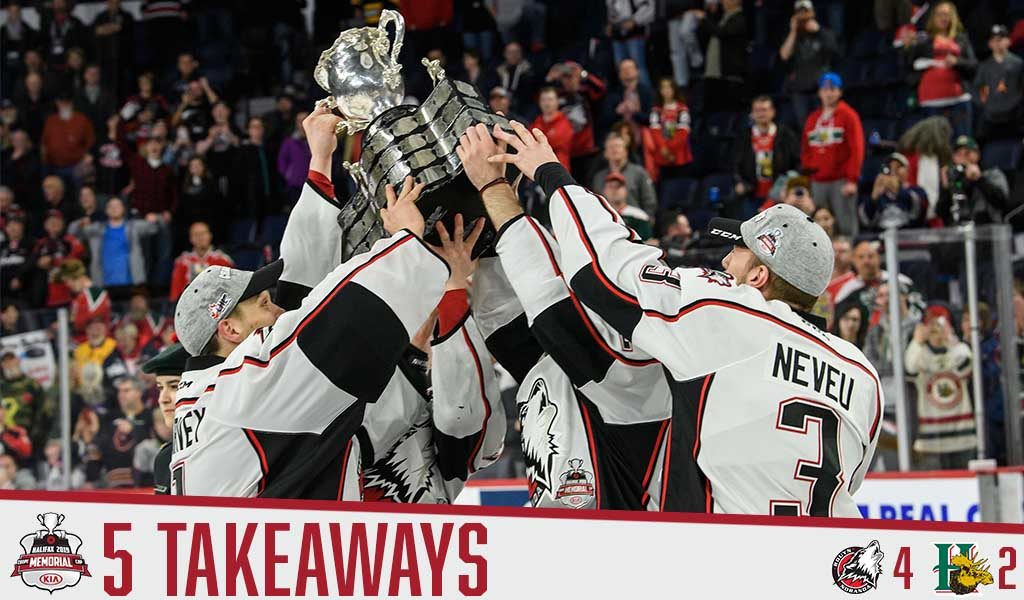 For the first time in franchise history, the QMJHL’s Rouyn-Noranda Huskies are the Memorial Cup champions after the club defeated the host Halifax Mooseheads by a 4-2 score on Sunday.

Here are five key takeaways from the deciding contest:

After putting together a 2018-19 campaign that saw the club set a QMJHL record with 59 wins in a single season, including 25 consecutive victories to match a CHL-wide high-water mark originally set in 1974, the Huskies added to their trophy case this spring in being the last team left standing in the QMJHL playoffs to capture their second President’s Cup title in four seasons. Not yet done, the team put together a 2-1 showing through round robin action at the 2019 Memorial Cup presented by Kia, earning a spot in the semi-final before ultimately closing the deal on Sunday versus the Mooseheads.

After falling to the Huskies in six games in the President’s Cup Final, Halifax hoped to turn the tables on first-place Rouyn-Noranda to claim the CHL crown, but once again fell short. That series saw Rouyn-Noranda win twice in the opposing barn, including the series-deciding match, and while despite playing in front of the opposing crowd again Sunday, the Huskies managed to find the win column. The matchup marked just the second time in Memorial Cup history where two QMJHL opponents had battled for the crown, with the last occurrence coming 13 years ago when the Moncton Wildcats defeated the Quebec Remparts to capture the President’s Cup, only for the Remparts to get the last laugh as they downed the host Wildcats to win the year-end tournament.

Noah Dobson is a two-time Memorial Cup champion. After winning it all last spring as part of the Acadie-Bathurst Titan, the budding blue-liner was shipped to the Huskies ahead of this year’s QMJHL trade deadline, with the franchise bringing in reinforcements in search of its first title. Dobson’s addition proved to be an instant success as the New York Islanders first-round draft pick recorded 29 points in 20 postseason appearances to finish third in the league scoring race while he was also recognized with the Guy Lafleur Trophy as the QMJHL playoff MVP. In capturing the CHL championship, Dobson also does so alongside bench boss Mario Pouliot, who guided the Titan to the crown a year ago before joining the Huskies for the 2018-19 campaign.

Huskies left-wing Joel Teasdale certainly showed why the Montreal Canadiens inked him to a contract last September as the 20-year-old first dominated the QMJHL playoffs in tallying 34 points in only 20 appearances, outpacing all competition. There was no slowing down in the year-end tournament either as Teasdale picked up another five points, including a goal midway through the second period Sunday as part of four unanswered tallies by the Huskies. Like Dobson, Teasdale was a late addition to the Huskies this season with the club setting its sight on a championship, with Teasdale proving to be yet another keen acquisition by the club.

After falling in overtime to the OHL’s London Knights in the 2016 Memorial Cup, a handful of Huskies earned redemption Sunday in finding the winner’s circle in their second attempt. Chief among the group is 2019 Jean Beliveau Trophy winner Peter Abbandonato, who paced the QMJHL this season with 111 points, as well as starting netminder Samuel Harvey. Both long-time Huskies also contributed key performances Sunday, with Abbandonato potting a third-period goal that ultimately proved to be the game winner, while Harvey turned aside 23 shots en route to the victory as the two closed out their decorated careers in hoisting junior hockey’s most prestigious trophy.