5 Takeaways: Huskies come out on top but Mooseheads win tie-breaker 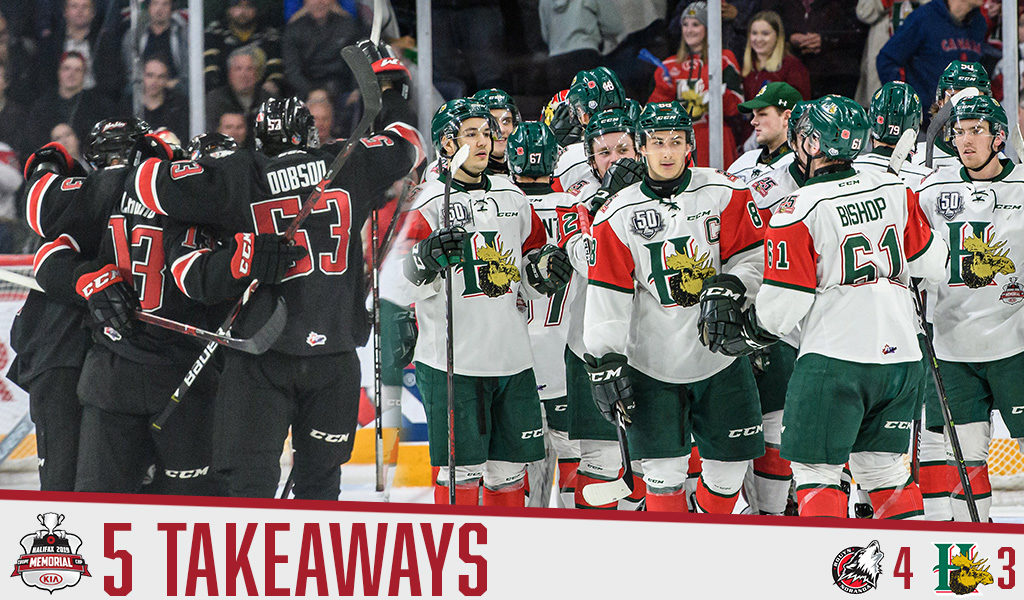 Round robin action at the 2019 Memorial Cup presented by Kia wrapped up Wednesday as the QMJHL champion Rouyn-Noranda Huskies came away with a 4-3 victory over the host Halifax Mooseheads. Despite the result, the Mooseheads earned a bye into Sunday’s championship final due to the goal differential tie-breaker, while the Huskies will now face off against the OHL’s Guelph Storm in Friday’s semi-final.

Here are five key takeaways from the final game of the round robin:

Huskies get best of Mooseheads, again

The Huskies toppled the Mooseheads again, coming on the heels of the club’s six-game series win the QMJHL Final to capture the President’s Cup for the second time in four years. Still, the tie-breaker rule will force the Huskies into a longer path to the winner’s circle as the club will first need to handle the Storm if it is to challenge for a franchise-first Memorial Cup. Leading the way for the Huskies on Wednesday was blue-liner Alexis Arsenault who picked up a pair of helpers, while four different skaters found the back of the net, including left-wing and Boston Bruins prospect Jakub Lauko, who picked up the game winner with just 55 seconds remaining in the final frame to earn third-star recognition.

For just the sixth time under the current tournament format, adopted in 1983, three teams notched 2-1 records through round robin play to tie for first place, while Halifax is also the first club to win the tie-breaker despite losing its final game. The most recent occurrence came last year when the Acadie-Bathurst Titan advanced to the Championship Final on a tie-breaker and ultimately won it all, while the same also happened in 1996 and 1997 with the Granby Prédateurs and Hull Olympiques, respectively. Unfortunately, the Shawinigan Cataractes (1985) and Calgary Hitmen (1999) weren’t as fortunate, as both teams advanced to the final round but didn’t come out on the winning side.

Despite coming out on the losing side, Mooseheads netminder and Chicago Blackhawks prospect Alexis Gravel locked it down in the blue paint, coming away with 36 saves, including 18 in the third period alone as the Huskies poured it on. In all, the 19-year-old native of Asbestos, Que., has been one of the Mooseheads top performers this season and has now carried over his strong play to the year-end tournament, posting a 1.50 goals-against average and .949 save percentage to lead all goaltenders competing at the 2019 Memorial Cup presented by Kia. Through 2018-19, Gravel earned 33 wins in just 49 appearances before adding another 14 victories in the postseason.

While much of the talk surrounding the Mooseheads has focused on the likes of draft-eligible winger Raphael Lavoie, as well as fellow forwards Samuel Asselin and captain Antoine Monard who are in search of their second-straight CHL championship after winning it all with the Titan a year ago, left-wing Maxim Trepanier has flown under the radar for the club. Through three games, the 20-year-old has collected a team-leading six points, including another assist versus the Huskies on Wednesday. Added from the Gatineau Olympiques in hopes of making a push for a championship, Trepanier proved to be a key addition for the Mooseheads after he put 20 points across four rounds of playoff action.

The horses came to play for the Huskies on Wednesday as left-wing and Montreal Canadiens signee Joel Teasdale recorded his second goal of the tournament thanks to a pretty feed from linemate Peter Abbandonato, who dished a perfect cross-crease pass. It’s been a spectacular spring for Teasdale, who led the QMJHL in playoff scoring with 34 points. Meanwhile, Abbandonato is always a threat when on the ice. That much was evident after the 21-year-old centre terrorized the QMJHL with an 111-point season, counting 29 goals and 82 assists, to capture the Jean Beliveau Trophy as the league leading scorer.