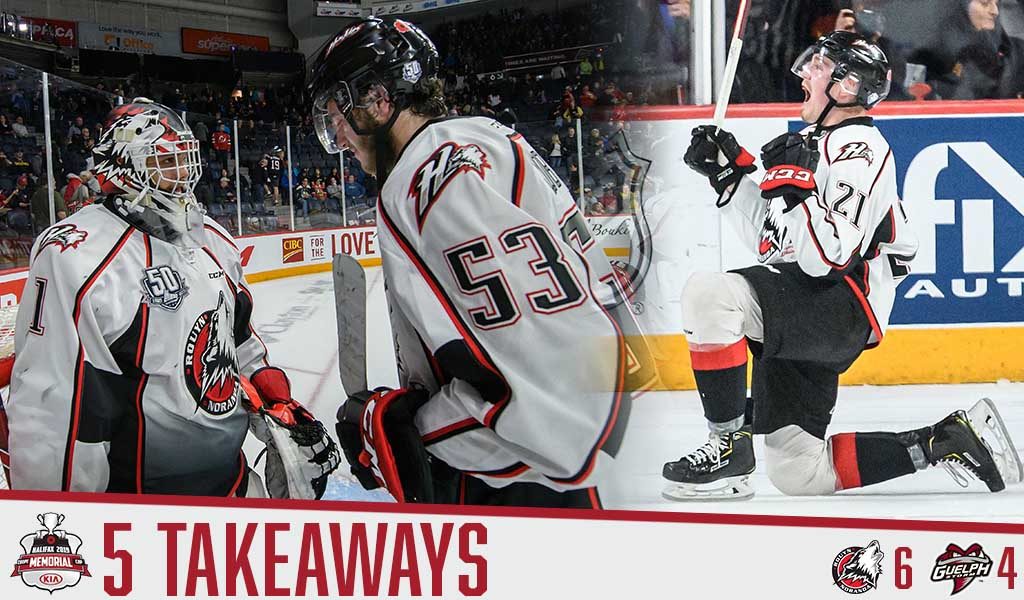 For the second time in four years, the QMJHL’s Rouyn-Noranda Huskies will play for the CHL crown after defeating the OHL’s Guelph Storm by a 6-4 score in semi-final action at the 2019 Memorial Cup presented by Kia:

In 2016, the Huskies advanced to the Memorial Cup Final only to fall to the OHL’s London Knights in overtime. A handful of players who were on that squad, including 2019 Jean Beliveau Trophy winner Peter Abbandonato and netminder Samuel Harvey, will now have a second opportunity to win it all as they wind down their junior careers. Advancing to Sunday’s final is the latest chapter on what has been a storybook season for the Huskies that saw the club set a QMJHL record with 59 wins in a single season, a stretch which also included 25 consecutive victories to tie a CHL high-water mark that was originally set in 1974 by the QMJHL’s Sorel Éperviers.

A year ago, blue-liner Noah Dobson hoisted the Memorial Cup as part of the Acadie-Bathurst Titan and now has a chance at back-to-back titles this spring. Doing so would be the latest highlight in what has been a hectic year for Dobson, decorated with his first-round selection in the 2018 NHL Draft by the New York Islanders, while he also earned a spot on Team Canada at the 2019 IIHF World Junior Hockey Championship. That’s not to forget his formidable performance in this year’s playoffs when he put up 29 points in 20 appearances to earn the Guy Lafleur Trophy as the QMJHL playoff MVP. Meanwhile, Dobson isn’t the only member of the Huskies with a chance to win consecutive championships. There’s also bench boss Mario Pouliot, who guided the Titan to the title last year before he shifted to Rouyn-Noranda this season.

Huskies centre Felix Bibeau played the hero for his squad on Friday as he recorded back-to-back markers in the third period, including the eventual game winner, to guide Rouyn-Noranda to the winner’s circle, while he also came away with first-star honours. The tallies pushed Bibeau to a tournament-leading four goals, keeping up his impressive production from the 2018-19 campaign when he finished above a point-per-game pace with 28 goals and 41 assists in 63 appearances before putting up 29 points across four rounds of playoff action to tie Dobson for the team lead in scoring. The 20-year-old has spent all three years of junior days with Rouyn-Noranda, collecting 144 points in 182 career contests.

After coming out on the winning side in seven elimination games in the OHL playoffs, the Storm’s miraculous run came to an end Friday as the team fell just short versus the Huskies. While the team’s year ends on a low note, there is still much to smile about from a memorable campaign and playoff run that saw the Storm mount a trio of postseason series comebacks, including a reverse sweep of the Eastern Conference leading London Knights, three straight wins versus the Saginaw Spirit to take the series in seven games, topped off with a six-game set against the first-place Ottawa 67’s after the club initially dropped the first two contests. That run also saw centre Nick Suzuki claim the Wayne Gretzky ’99’ Award as the OHL playoff MVP after he set a franchise record with 42 points in a single playoff run.

Congratulations to tonight's Semi-Final winners the Rouyn-Noranda Huskies! Thanks to the @Storm_City for a fantastic showing this week. Get set for a thrilling Championship game Sunday night when the @HuskiesRn face the host @HFXMooseheads. It's going to be awesome. #MemorialCup pic.twitter.com/VvcN9zTf4z

It took six games for the Huskies to defeat the Halifax Mooseheads in the QMJHL Final to claim the President’s Cup. They’ll now look for one more victory over the host squad in Sunday’s Championship Final to earn the franchise its first Memorial Cup title. As for the Mooseheads, the team earned a bye to the final round after the goal differential tie-breaker split a three-way deadlock for first place in the round robin standings. Halifax will now try for its second Memorial Cup after winning it all in 2013. This year’s final also marks the first time since 2007 when the same two finalists from a league playoff will compete for the Memorial Cup. That year saw the Medicine Hat Tigers slayed the Vancouver Giants in seven games to capture the Ed Chynoweth Cup, only for the host Giants to get the last laugh with a 3-1 win in the Memorial Cup Final.