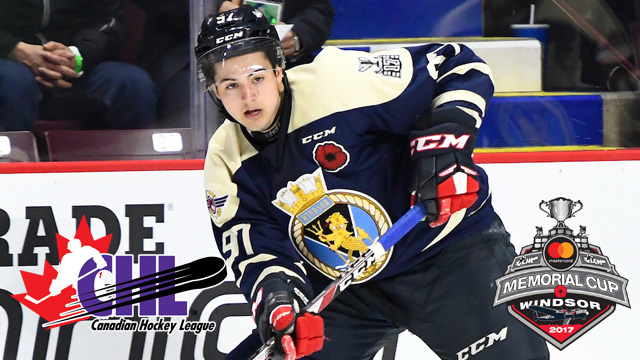 The Canadian Hockey League in association with the Windsor Spitfires and the 2017 Mastercard Memorial Cup Host Organizing Committee have announced that a donation of $30,000 will be made to the Dominion Command Poppy Trust Fund.

The money was raised through an online auction of the Spitfires’ game-worn and game-issued commemorative jerseys from the opening game of the 2017 Mastercard Memorial Cup.

All donations to the Poppy Fund are placed in trust to be used for the care and benevolent support of Veterans and their dependents.

The Theme Jersey was designed by the Spitfires in conjunction with the CHL paying tribute to the Victoria class long range patrol submarine HMCS Windsor which is named after the City of Windsor.

The Mastercard Memorial Cup Theme Jersey Program was created in 2008 and has cumulatively generated over $180,000 for Veterans.

The Memorial Cup was donated in 1919 by the Ontario Hockey Association as a memorial to those young men and women who had been given their lives in the defence of Canada during World War I.  The 2017 edition of the championship in Windsor was won by the host Spitfires and marked the 99th time this prestigious trophy was presented.